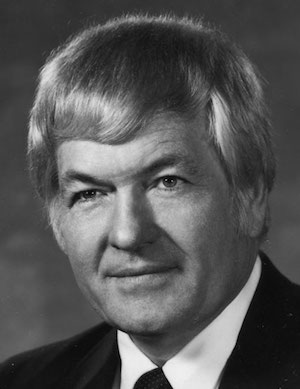 Clarence A. Kopp, Jr., was born on May 25, 1927. He described himself as spending most of his life chasing after Clyde Meadows. In 1950, he became the first associate pastor to work under Meadows at King Street UB church in Chambersburg, Pa. Back in Ohio, he became a pastor-superintendent, a role which Meadows held for 27 years. He was elected bishop in 1981, exactly 20 years after Meadows was elected to that position (eight years for Meadows, 12 years for Kopp). Upon relocating to Huntington, Ind., he moved into the house Meadows had built. As bishop, Kopp also served four years, as Meadows did, as president of the International Society of Christian Endeavor.

Of those three years at King Street Kopp wrote: “He set an enduring example for me as a visionary, a motivator, a skilled preacher, and a man gifted in dealing with relationships. I also appreciate the fact that he recognized my own strengths, and gave me the freedom to develop those gifts. My experience at King Street was a wonderful way to begin a lifetime in the ministry.”

They were a great team. Meadows wrote:

At the time, we had about 75 different organizations in the church–seven Christian Endeavor societies, 30-some Sunday school classes, three girl scout troops, etc. We secretly divided these groups between us. He would oversee this group, I would oversee that group. We wouldn’t tell them; we would just look after them on our own. Later, we exchanged some groups.

He would preach one Sunday morning a month. In revival meetings, we would each take a couple nights in a row, with people never knowing who would preach that night. We deliberately worked it so the meetings wouldn’t develop around the personality.

Visitation was a big part of the assistant’s job description, and Clarence Kopp was the best visitor I’ve ever known–much better than I was. He would take half a dozen folders from our church files, put them on the car seat, glance at them before going in to see a family, and be able to talk to them intelligently about their background, interests, ages of children, and church involvement. He visited as many as 2,000 families a year, and those visits resulted in new people coming to church.

In time, we both noticed a problem taking shape: within the same congregation, we were developing a Kopp following and a Meadows following. Clarence didn’t cultivate this, and he didn’t desire it. It’s just that he was good at what he did, and people were drawn to him. A different person in his situation could have split the church, but he didn’t want that any more than I did. There were no problems between us, and I was thrilled to have such a capable associate.

After three years, Kopp’s home conference wanted him back, so he left to pastor his own church. During his years as pastor of Prescott Avenue UB church (Dayton, Ohio), the attendance increased to over 400 and numerous people found Christ. He later became pastor of Redeemer UB church (now Living Word) in Columbus. He was pastoring Redeemer when the General Conference elected him bishop in 1981. After leaving the bishopric in 1993, he spent two years as fulltime superintendent of Central Conference.

In 1998, he helped start Anchor UB church in Fort Wayne, Ind., and attended until declining health made it too difficult to make the weekly journey from Huntington. Anchor was a restart of Third Street UB church, which was Kopp’s home church.

Clarence and Virginia Kopp both graduated from Huntington College. They were married nearly 60 years and gave birth to four children. Together, they traveled to all 50 states, to China, Russia, Australia, New Zealand; and to Europe many times. Most treasured of all were their seven trips to the Holy Land. Virginia passed away January 2, 2015.

Also known as the Eager Eagle, Clarence Kopp inspired folks almost everywhere he went with his contagious smile, his encouraging and positive spirit, and his outgoing, authentic presence. If you asked him how he was doing, he would invariably reply, “Better than I deserve!”