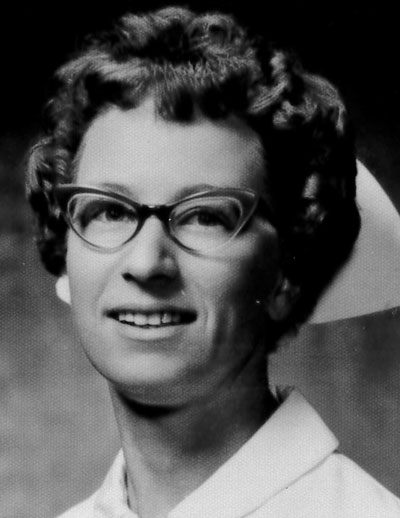 On June 23, 1957, Kathy Corcoran began the first of three terms as a missionary nurse at Mattru Hospital in Sierra Leone, spanning 1957-1968.

Kathy was from the United Brethren church in Woodland, Calif. As a high schooler, she felt God calling her to the mission field, and she chose nursing as the way she would serve God overseas. After a three-year course in Oakland, Calif., she took specialized courses on mid-wifery at the New York Maternity Center and at Johns Hopkins Hospital in Baltimore, Md.

Throughout the 1950s, we intended to open a hospital in Mattru, but couldn’t find a doctor. A team of dedicated nurses were doing a lot of medical work, and a government doctor came from Bo once a month. But we really needed a fulltime, full-fledged physician.

Then we learned about Dr. Alvin French, who worked with another denomination and was being sent home after just one year on the field. They apparently didn’t need him. Field Superintendent M. E. Burkett invited French to complete his term at Mattru Hospital—an idea that was already in the doctor’s head, since he had visited Mattru soon after arriving in Sierra Leone.

In May 1957, Alvin and Barbara French and their two children settled in Mattru. Kathy Corcoran arrived the next month. As a certified midwife, she kept busy delivering babies—one of whom was the third French daughter.

On June 7, 1969, Kathy married Alan Jones, an Englishman who had taught at the UB Centennial Secondary School in Mattru. In the second volume of “Trailblazers in Sierra Leone,” published in 1973, George Fleming reported that Alan and Kathy were living in Quebec and had a daughter, Phillipa.