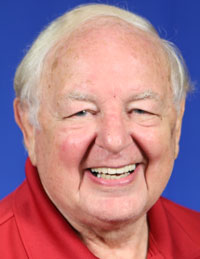 Several times during our history, we’ve had just one bishop. But never by design…until 1993.

Christian Newcomer was elected bishop in 1813 following the death of Martin Boehm. Later that year, William Otterbein passed away, leaving Newcomer as the only bishop. That lasted until 1817, when Andrew Zeller was elected. (Some historical accounts say Zeller was elected in 1815, but 1817 seems more likely.)

Newcomer passed away in 1830 just one year into his latest four-year term. The next General Conference was three years away. The other bishop at the time, Henry Kumler Sr., served by himself until 1833. General Conference then elected a total of three bishops, perhaps wanting to hedge their bets.

In 1953, we went from three bishops to just two bishops. Clyde Meadows was one of those two bishops throughout the 1960s (1961-1969), and served much of the final year by himself after Bishop Robert Rash suffered severe heart problems. In 1969 we elected three bishops, increased to four in 1973, and back down to three in 1989.

However, the idea of having just one bishop came up in 1965, and never went away. A 1981 study committee recommended having just one bishop, and the notion kept percolating throughout the 1980s. Finally, with all three bishops set to retire in 1993–Ray Miller, Jerry Datema, and Clarence Kopp–it seemed like the right time to do it. And one name kept surfacing: Ray Seilhamer (right), who was then president of Evangelical School of Theology in Myerstown, Pa.

Ray Seilhamer was elected on June 22, 1993, as the only United Brethren bishop. He served eight years in that role. Since then, four more persons have served as the only bishop–Paul Hirschy, Ron Ramsey, Phil Whipple, and Todd Fetters.

Although nobody talks about going back to multiple bishops, history might caution, “Just give it some time.”