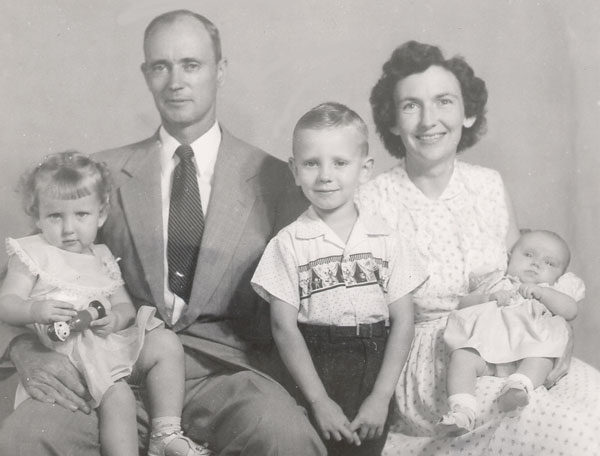 Don and Leora Ackerman and children in 1956.

Don and Leora Ackerman were married on June 19, 1947, at the Van Orin United Brethren church in Illinois. They had met at Huntington College, and after the wedding, they both taught school in Huntington Township. However, they soon sensed God calling them to the mission field. It turned out to be Honduras, where they spent nine years.

Don grew up in Sabetha, Kansas, became a Christian at a United Brethren campmeeting, and enrolled at Huntington College in 1939. He entered the Army in 1943 and was initially trained to fly the P-40 fighter. He had no trouble hitting ground targets, but said, “When it came to an aerial target, I was absolutely no good at all.” He then trained to fly the B-26 bomber. When the Army decided to stop using the B-26, they sent to train on B-17s. By the time he finished that training, the war in Europe ended. So he was sent to bombardier school at the B-29 base…where he basically sat until Japan surrendered.

Don returned to HC in the spring of 1945 and graduated in 1947 with a teaching degree.

Leora Smith was born in Kansas, but lived most of her life in Illinois. She was converted as a child under the preaching of her father, Rev. Cecil Smith. She graduated from Huntington College in 1946, following in the tracks of her older brother and sister. Her sister Juanita spent 15 years as a nurse at Mattru hospital in Sierra Leone, starting in 1950.

In 1945, we assumed oversight of several English-speaking churches in Honduras. The first missionaries were Harry Flickinger and his family, who then pastored the UB church in Hillsdale, Mich. They went in February 1948. They were effective missionaries and accomplished a lot…for three months. Then severe illness struck Flickinger. Doctors advised him to return to the States ASAP, which he did. He was immediately hospitalized, and remained sick for two years.

Flickinger’s illness was largely blamed on unsanitary living conditions. Mission director George Fleming was determined not to let that happen again. He spent two weeks in Honduras in early 1949 and bought a very nice house previously owned by a former ship captain.

A Standard Fruit Company ship delivered the Ackermans to La Ceiba, Honduras, on July 22, 1949. What a surprise when they arrived at their new home–a fully furnished, two-story place with 13 rooms. So big, in fact, that the Ackermans decided to use just the first floor.

The Ackermans were sent mainly to work in the sadly-equipped 80-student school located about a half-mile from their home. George Fleming had warned them about the Spartan conditions–crude furnishings, few books, practically no equipment. Don, a skilled carpenter, set to work crafting a bookcase, blackboard, and other items. A fellow at the fruit company designed a desk, and Don found people to build probably 100 of them, plus chairs.

They saw the mission go through major changes, including the shift to a focus on the Spanish-speaking population and village evangelism. In 1956, Don had the vision to buy a large piece of property on the outskirts of La Ceiba. He built the first building there–a cement block mission house which, today, is the conference headquarters. Today, that property is also home to the Bethel Church and the Bethel school.

The school was closed in 1957. However, the Missions board approached the Ackermans about going to Jamaica. They wanted Don to be principal of a new school Jamaica Conference was starting in Kingston. It would have been the first time UB missionaries were transferred from one field to another. However, the Ackermans were never able to secure visas. The Jamaican government figured Don would replace a national as principal of the high school–which was true. As it turned out, the school never got off the ground.

Bishop Robert Rash told Don and Leora about a new UB church starting in Des Moines, Iowa. It could use workers. Don easily landed a position teaching math and science in a junior high school. And there the Ackermans remained until they retired–faithfully serving in the Patricia Park UB church (now closed), going on the occasional work trip, and always remaining intensely interested in the people of Honduras.

Don Ackerman passed away on July 9, 2008. Leora continues living in Hastings, Nebraska. Today would have been their 70th anniversary.