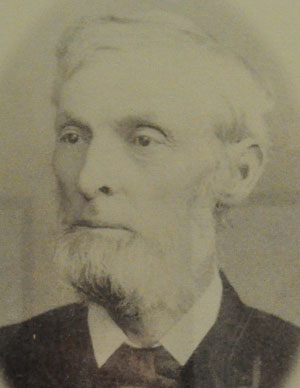 By the time John Dickson was born on June 15, 1820, his family had been in the New World for three generations. His great-grandfather, amidst political troubles, fled Scotland at age 15 and, after spending a few years in Ireland, arrived in Philadelphia. He eventually settled around Lancaster, Pa.

Dickson’s grandfather was abducted by Indians when he was 7 years old, but was released after three months. He went on to serve in the military, and was one of only three soldiers to escape an Indian massacre; everyone else was killed and scalped. He fought in the Revolutionary War, along with his four brothers, all of whom were dead by the end of the war. One brother was killed at the battle of Monmouth, one at Brandywine, one by Indians, and the other died on the way home.

Dickson parents were Presbyterians, and he was required to recite the Westminster Catechism every Sunday. At age 17, he began teaching school in Pennsylvania. In 1842, he was converted under the preaching of a first-year minister during a service held in a schoolhouse near Chambersburg. Two years later, he became a United Brethren preacher.

For the next 22 years, Dickson was a pastor–sometimes of a circuit of scattered churches, sometimes of a congregation in a single location. He built some churches, and at every place, there were revivals. Henry Adams Thompson wrote of Dickson, “He never left a charge without leaving it in a better condition than when he took it.”

In 1869, Dickson was elected bishop (on the first ballot), and continued in that role until 1893. Daniel Berger said that in chairing meetings, “the progress of business was always safe in his hands.” And, “As an expository preacher, he has been recognized as having no peer in the denomination.” Thompson said Dickson’s style was to “bring home God’s Word with the least amount of verbiage.”

As a bishop, Dickson was a member of the 1885 Church Commission which worked on a new Constitution and Confession of Faith. However, he refused to participate because he feared it would lead to a division…which it did, in 1889. When the division occurred, he did what he could to hold the church together. However, he never considered leaving with Milton Wright. Thompson wrote, “If he could not conscientiously have remained with the Church, he would have sought a home in some other denomination.”

Dickson served one more term, and then was done in 1893.

Dickson apparently did a lot of writing. Thompson said of him, “While we may not always accept his views, he puts them clearly, forcibly, and without equivocation. We may not always believe in what he says, but we are sure he believes so. He has written nothing foolish. He writes to be understood, and the average reader knows what he means.”