30 Apr On This Day in UB History: May 1 (Orville Merillat) 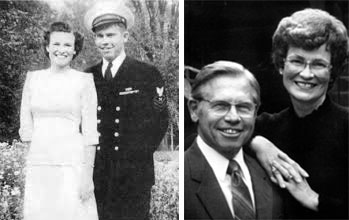 In 1946, after returning from ship-board service in the Pacific during World War II, Orville and his wife, Ruth, opened a small wood-working shop in their garage in Adrian, Mich. It eventually grew into Merillat Industries, the world’s largest maker of cabinets, with a dozen plants around the country. About his revolutionary innovations, Orville humbly deadpanned, “I’ve been blessed with some good ideas.”

Orville and Ruth, members of Trentons Hills UB church in Adrian, Mich., sold the company in 1985 and started the Merillat Foundation. With their personal involvement in the company decreasing, they focused on giving money away. Their philanthropic generosity included Focus on the Family, World Vision, Youth for Christ, and many other colleges and ministries.

Within the United Brethren church, there were many beneficiaries — local churches, camps, missions work, church planting, and the national office and its ministries. But no entity benefited more than Huntington College.

Their first gift to Huntington College, in 1968, was cabinets for a house the college owned. In 1972 they led the campaign for a new athletic complex. During the 1980s and 1990s, nearly every new building and campus improvement received funding from the Merillat Foundation. Several major buildings bear their name — the Merillat Centre for the Arts, the Merillat Physical Education Complex, and the RichLyn library (named after their two children, Richard and Lynette).

Orville’s office at the Christian Family Centre in Adrian was adorned with items bearing the Huntington College name and logo. He and Ruth wanted Huntington College to prosper — not only because it was their denomination’s college, but because they believed in its mission.

Having completed just six months of high school, yet becoming a multi-millionaire, Orville could easily have said, “Who needs college? You can succeed without a college degree. I did.” But you heard nothing of the sort from him. Rather, he said, “I have seen the value of higher education in people who have worked for us.” Some of them were Huntington College products.

Ruth added, “We want to help our country, and we can only do it through young people. Our vision is Christian young people.”

Orville nodded in agreement. “They are the future.”

In 1987, Orville Merillat gave the Commencement address at Huntington College. He concluded with this:

You will find that people are unreasonable, illogical, and self-centered. But let God love them through you anyway.
If you do good, people will accuse you of ulterior motives. Do your best anyway.
If you are successful, you may win false friends and true enemies. Succeed anyway.
Honesty and frankness make you vulnerable. Be honest and frank anyway.
The good you do today will be forgotten tomorrow. Do good anyway. It’ll let you sleep at night.
The leaders of the biggest dreams can be shot down by those with the smallest minds. Think big anyway.
What you spend years building may be destroyed overnight. Build anyway.
Give the world the best you’ve got, and you may get kicked in the teeth. Give the world the best you’ve got, anyway.
In short, dare to be different from a lot of people you’ll run into.
If you do something worthy of remembrance, it’ll be remembered.