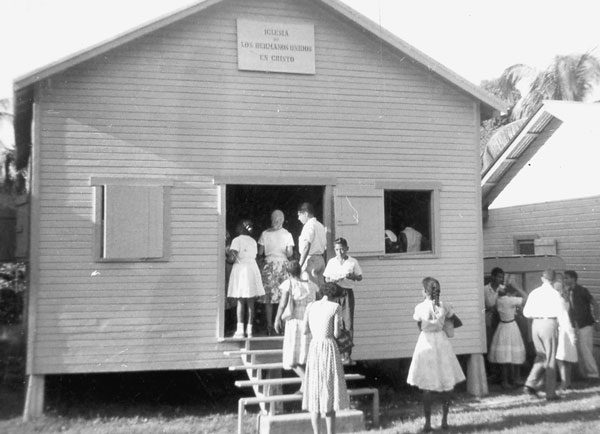 The Sambo Creek church in Honduras.

We became involved in Honduras in 1945. For the first eight years, the work focused around several English-speaking churches comprised mostly of persons who had immigrated from Caribbean islands. Those churches separated from us in 1953 (it was very contentious), and we pretty much started over.

This time, we focused on the largely unreached Spanish-speaking population. Leading the way was missionary Archie Cameron, who had come to Honduras in 1952. He was joined by fellow missionaries Don and Leora Ackerman and Betty Brown.

Archie and a growing team of zealous young Christians took the Gospel from village to village. There were many new Christians. By June 1953, three Spanish congregations had been established, and another three were on the way. Some very capable Hondurans began leading alongside the missionaries–Eudaldo Mejia, Rufina Cruz, Manuel Flores, Andres Castillo, and others.

By 1956, the Spanish outreach had touched many places–Jutiapa, Sambo Creek, Nueva Armenia, San Francisco, Santa Ana, five parts of La Ceiba, and various mountain villages. There had been over 300 conversions. There were three ordained ministers, and several future pastors were enrolled in Bible school or seminary.

Seven churches and preaching points had been established, and in many other places, it was just a matter of time. Seven churches was enough to organize a conference. Which is what Bishop Ezra Funk did on April 23, 1956.