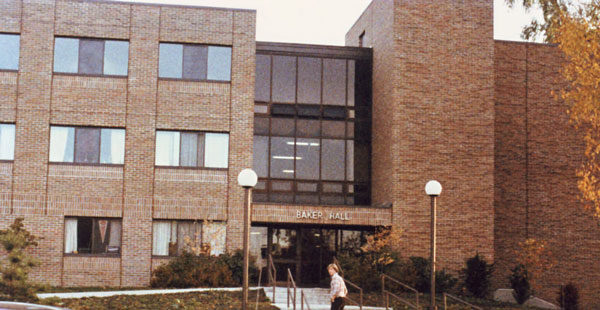 Many changes in denominational leadership occurred in 1981. Among them was the inauguration of Dr. Eugene Habecker as president of Huntington College. He had been hired in 1979 as executive vice president–sort of a president-in-waiting. Upon the retirement of DeWitt Baker in 1981, after 16 years as the president, Habecker would take his place.

As executive vice president, Habecker spent eight months developing a long-range, 17-year plan for the college. This “Quest for Quality” program, which would lead up to the college’s centennial in 1997, called for advances in curriculum, plus the addition of various buildings, including a new residence hall. That part happened even before Baker left office.

On April 22, 1981, ground was broken for what became Baker Hall, named in honor of DeWitt Baker. It was built behind the original Wright Hall, which was later torn down and replaced with Roush Hall.