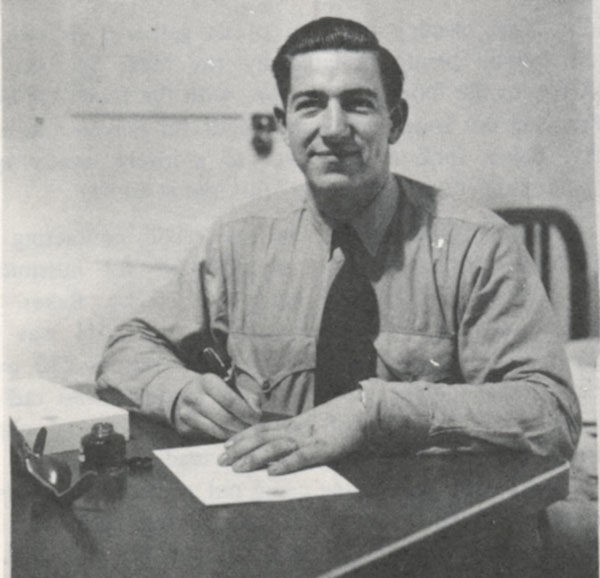 DeWitt Baker graduated from Huntington College in 1940, taught school in Michigan for two years, and then volunteered for duty in the Naval Reserves Air Force, where he learned to fly. While on furlough in 1942, he married a UB preacher’s daughter, Evelyn Middaugh, whom he had met at Huntington College. The Navy then sent him to Brazil to help guard the naval shipping lanes to Africa. He spent most of the war flying patrols over the Atlantic searching for German submarines, with some stints as a test pilot.

In 1944, Evelyn read in the denominational magazine about five United Brethren missionaries who were on their way to Sierra Leone, and would be stopping in Natal, Brazil. (See the April 9 post.) She clipped the article and sent it to her husband, who received the letter just as he arrived in Natal on temporary assignment. Natal was located on the eastern point of Brazil, the closest point to Africa.

The missionaries were stuck in Natal for six weeks. Lt. Baker was able to spend three weeks with them before being transferred. In the company of a naval officer, the missionaries could eat at the naval base and attend English church services there. One day, he took them up a river for a picnic, with American hotdogs. Another time, 19 missionaries gathered at the hotel for an indoor picnic supplied by the mess sergeant at the base.

Altogether, up to 40 Africa-bound missionaries, representing many denominations, were stranded in Natal. They met at the hotel each morning, 8-10 am, for devotions. DeWitt Baker met with them every other morning; the alternate days found him flying patrols over the Atlantic. One time they had special prayer for one of Baker’s fellow pilots who, while far out in the ocean, had an engine die. There was much rejoicing when he made it back.

Planes were constantly making the flight across the Atlantic, but military people had priority. Finally, on June 4, Pan Am had a plane for them. A few seats would be filled by the wives of Firestone workers. All the rest would go to missionaries. On June 5, after a 14-hour flight, their seaplane landed in Liberia. From there, the five United Brethren missionaries made their way by boat to Sierra Leone. They reached Sierra Leone on June 9, exactly two months after leaving Indiana.

Lloyd Eby was impressed with young Lieutenant Baker, and sent him a letter later that summer. After leaving the military, would he be interested in going to Sierra Leone to start a secondary school? DeWitt’s reply was that God hadn’t called him to become a missionary, and besides, he wasn’t a United Brethren member. But Eby followed up in 1948 after returning to the States. In August 1949, DeWitt and Evelyn Baker began their own journey to Sierra Leone, where they would spend the next 16 years, followed by 16 years in the Huntington College presidency.