05 Apr On This Day in UB History: April 5 (Boehm’s Memorial) 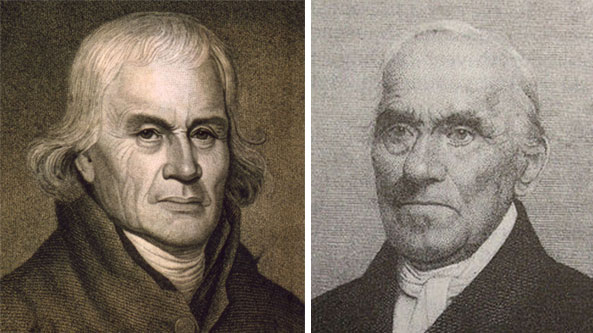 Henry Boehm, a son of Martin Boehm, was a traveling companion of Methodist bishop Francis Asbury. It was 1812, and the two ministers were holding meetings in Leesburg, Va. Asbury had a premonition of some kind. Before the meeting ended, he told Henry, “Get the horses ready. As soon as the conference adjourns, we must go to your father’s house.”

Henry reminded Asbury of other appointments on their schedule, but Asbury was insistent. They need to go to Lancaster, Pa., immediately.

It was a 100-mile trip. About a mile from Martin Boehm’s homestead, they heard the news: Bishop Boehm had passed away on March 23.

On April 5, 1812, a memorial service was held for Martin Boehm. A large crowd assembled in Boehm’s Chapel, which Martin had built on his own property.

Asbury preached to a large crowd, using the text, “Behold an Israelite indeed in whom there is no guile.” He mentioned all the roles Boehm filled–patriarch, father, neighbor, friend, companion. But, he said, “The prominent feature of his character was goodness. You felt that he was good.”

Asbury then called on Henry Boehm to speak.

Henry stood at the pulpit–the same pulpit where he had often heard his father speak, in the church that bore his father’s name. Many people were weeping. He saw his elderly mother and numerous relatives. Looking out the window, he could see the new grave in which his father had been laid.

Henry was overcome with emotion. His eyes filled with tears, and all he could say was, “Let silence speak.”