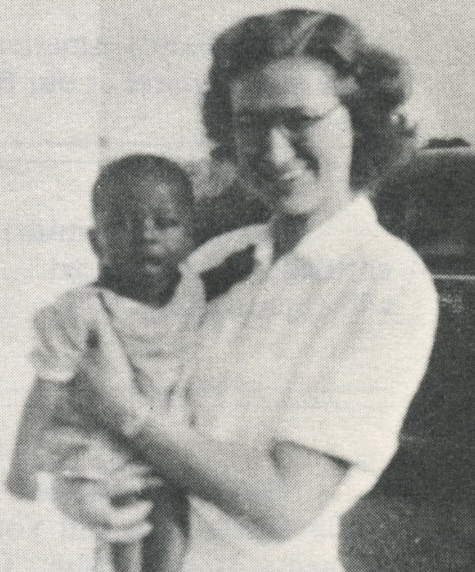 Juanita Smith, RN, arrived in Sierra Leone on March 30, 1950. She was the daughter of Rev. Cecil Smith, a longtime UB pastor in Illinois. Her sister, Leora Ackerman, was a UB missionary in Honduras. One of Juanita’s best friends at Huntington College, Betty Brown, was then on her way to Honduras, where she would move in with the Ackermans; Betty and Leora were childhood friends from one of the churches Cecil Smith pastored. (Juanita and Leora, it must be noted while in the midst of March Madness, were first cousins to legendary North Carolina basketball coach Dean Smith.)

In 1935, we opened a medical clinic in the town of Gbangbaia, the center of much of our work in Sierra Leone. But when the Missions board decided to start a full-fledged hospital, they opted for the up-and-coming town of Mattru. There were no buildings and, more importantly, no doctor–not until 1957. Until then, a string of nurses ran the medical work at Mattru. Starting with Juanita Smith and Oneta Sewell, who had come to Sierra Leone in 1944.

In 1950, these two nurses opened a medical dispensary in Mattru, and held daily clinics in Mattru and surrounding villages. At the same time, recognizing that a full-fledged hospital would require a lot of nurses, they started a nursing school with three students, all of them graduates of our Minnie Mull School for Girls in Bonthe. In the years ahead, many more students from Minnie Mull would enroll. The students made their own uniforms—blue dresses with white aprons and caps.

Mission director George Fleming, after a visit in 1952, wrote about Juanita Smith and Oneta Sewell, “I was truly amazed at their well-organized schedule day after day. They had full charge of the hospital, and without an attending physician, they possessed both skill in their healing ministry and skill at management and organization.”

Nurse Martha Bard continued running the Gbangbaia dispensary by herself. When she went on furlough, Oneta and Juanita took turns holding monthly clinics at Gbangbaia.

Juanita usually rode her bike to Gbangbaia, which involved bumping along rough paths, pushing the bike up hills, and carrying it over fallen trees and other obstacles. One of the African male nurses typically followed behind, carrying medical supplies on his head. After seven miles, Juanita would stop in the village of Kabati and wait for the nurse to catch up. They would treat some patients, eat lunch, and continue their journey.

Toward evening they would reach Imperreh, where they would spend the night and, the next morning, hold a small clinic. When they reached Gbangbaia later that afternoon, DeWitt and Evelyn Baker and family would be waiting. Juanita would spend two days there, treating people from surrounding villages.

When Juanita Smith returned from furlough in September 1958, she brought a new microscope, along with a new set of skills: she had taken a laboratory course at Lutheran Hospital in Fort Wayne, Ind. Dr. Alvin French, who had arrived the year before, put her lab skills to work—blood counts, urinalysis, stool examinations, and more. It provided more accurate diagnoses, which enabled more specific treatment.

Altogether, Juanita Smith served four terms in Sierra Leone, up until 1965. She later married Charles Guenzler and settled in Mt. Carroll, Ill., where her father had pastored many years before. Juanita passed away in August 1981.