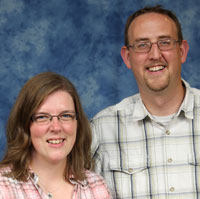 As reported on June 15, Steve Henry, pastor of Victory Heights UB church (Franklin, Pa.), has been hospitalized since May 27. He had surgery on Friday, June 24, and the ventilator was removed on Sunday. Steve’s wife, Amanda, sent this report on June 28:

“I am so excited!!!! Steve was greatly improved when I saw him today. Not himself yet, but a lot better than Sunday. It seems Steve’s anxiety issue has passed as far as I can tell for now. But really, who wouldn’t be stir crazy after being in the ICU for a month.

“They have him in a chair doing ‘therapy’ as much as he can stay awake. Stacking cans, folding washcloths, and working on swallowing to strengthen his throat. The speech therapist said he is definitely swallowing but isn’t getting the flap completely sealed over his windpipe to the lungs to keep the liquids out of the lungs. She gave him a list of exercises to strengthen his throat muscles.

“They started his Heparin IV again because we need him on blood thinner so the artificial heart valve he has doesn’t have a clot form. That would cause a whole new set of issues. Please pray he doesn’t end up with any new bleeding ulcers. His Heparin has made those an issue. It seems we are on the road to recovery. Praise the Lord!!!”

Amanda posts updates on Facebook. You can post your prayer and support there, or send notes to: