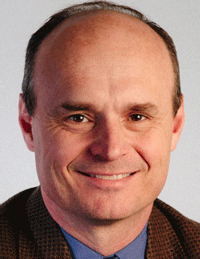 Ray Hilbert, CEO of Truth@Work, will be the keynote speaker at Huntington University’s 117th Commencement on Saturday, May 16. That day, the university will award master’s, bachelor’s and associate degrees to 285 graduates.

Huntington will honor graduates in the fieldhouse of the Merillat Complex at 2:30 p.m. The graduate hooding ceremony will take place at College Park Church at 10:15 a.m.

Ray Hilbert is the CEO and co-founder of Truth@Work, a not-for-profit organization headquartered in Indianapolis, Ind., which he co-founded in 1998. Through its monthly roundtable groups, Truth@Work equips Christian business owners and leaders in building their organizations on proven biblical principles, while integrating their faith into their daily operations.

Truth@Work is one of America’s fastest growing marketplace ministries, with nearly 700 participating members in 25 chapters across the country.

As CEO of Truth@Work, Hilbert has coached more than 500 business owners/executives in a wide variety of industries (both public and private companies). His faith-based approach covers such areas as hiring, firing, marketing, personal integrity, and organizational development.

His 20007 book “The Janitor – How an Unexpected Friendship Transformed a CEO and his company,” has been published in six languages, and is an international bestseller with more than 1 million copies sold worldwide. The book features the story of a young CEO mentored by a wise old janitor who teaches the struggling young business executive the true definition of success and business.

Previously, Hilbert was a regional director for Promise Keepers, where he facilitated large conferences and developed training programs for churches and other ministries. He has co-founded an inner-city church and food pantry and worked with some of America’s top corporations in sales and marketing.

Hilbert holds degrees from Anderson and Taylor universities. While in college, he played for the traveling Athletes-in-Action baseball team.