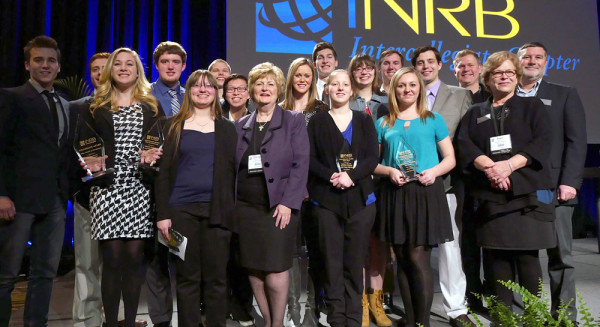 The students, all from HU’s Digital Media Arts Department, received the honors at the iNRB Student Production Awards Ceremony in Nashville, Tennessee, on Wednesday. February 25, 2015.

Juniors and film production majors Cassie Kasicki of Rockford, Ill., and Eric Luce of Salina, Kansas, won first place in the documentary film category for their entry titled “XO: What Defines You?” Their project also received the “Film Award of Excellence” within all the film categories.

“I am so proud of our students and how much work they put into their projects,” said Dr. Lance Clark (right), department chair and professor of digital media arts, film and communications. “Broadcast-fusion media students have stepped up their game with FDN News, and our Film Production student film ‘Infamy’ is a great, heartfelt story about forgiveness and moving on set in the post-World War II era. It shows an excellence in our digital media arts program and that our students can compete and win at the national level.”

First-place winners in each category were awarded $150 in prize money to be divided among team members, plus the opportunity to attend the 2015 NRB International Christian Media Convention in Nashville, Tenn. In addition to prize money, all first-place winners received a trophy and a certificate, along with $300, divided among team members, to cover transportation costs to the convention.

Twelve students traveled to the NRB convention this year along with Dr. Lance Clark and Dawn Ford, associate professor of digital media arts. All of the students competed in an onsite 24-hour media contest in film, TV news, and public relations.

The Huntington University website can tell you a lot more about the Digital Media Arts Department.