The HU students in Paris. 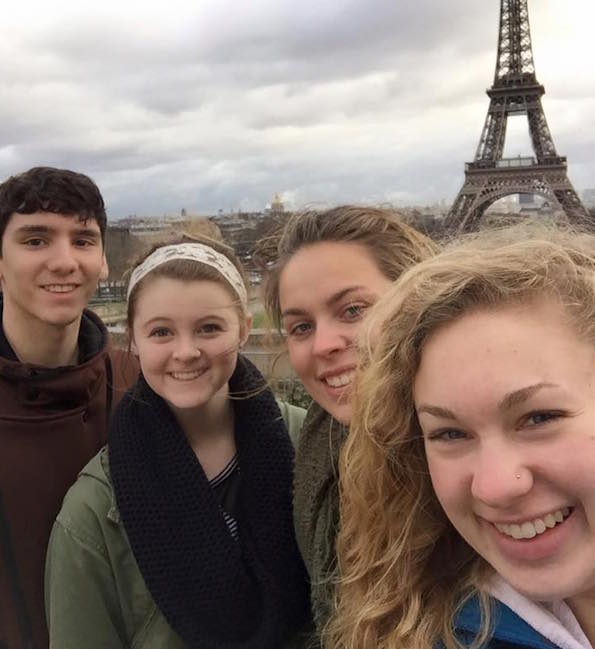 HU students with the Eiffel Tower in the background.

A group of 12 Huntington University students are spending January Term in Paris, France. They are staying about a mile from the Charlie Hedbo office, where 12 people were killed on Wednesday, January 7. However, because of a flight delay, they hadn’t yet arrived. They were supposed to land several hours before the Charlie Hedbo attack, but were delayed 24 hours in Indianapolis because of ice; that’s where they learned about the attacks.

Caitlin Trainer, a senior who is on her fourth trip to Paris, is leading the trip. “I for sure went through a period of second guessing our trip once I found out about the shooting, but upon affirmation from our Paris site coordinators that it’s completely safe to travel, I made the decision to stick with the plan,” she said.

Their first full day in Paris came on Friday, the day French police killed three gunmen and freed hostages. That day, they did a prayer walk around Paris, but stayed away from the Kosher store where a hostage situation was in progress. They report that they have never felt unsafe. They’ve been able to go shopping and sightseeing.

“We are totally fine,” said Trainer. “We’re not being affected by the attack whatsoever. Really, the only big thing that we noticed is different is that we just see more armed policemen with guns, which is actually kind of normal for Paris. A lot of times they do walk around fully armed with big guns. This time around there’s just more of them. So you’ll see groups of like 10 instead of just two walking around the city.”

Added freshman Hannah Barrett, “There are a lot of police officers out and about in the city, but it’s really not bad at all. Everyone is still going about their days just like normal. I haven’t been nervous at all. They really have it under control and are making people feel safe.”

For the trip, the students teamed up with an organization called Envision Paris. They are feeding the homeless, doing young adult discipleship, hosting an art exposition, and teaching English. They will return to the US on January 20.