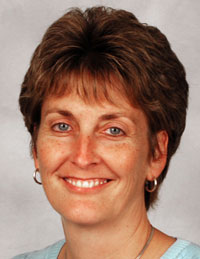 A United Brethren preacher’s kid, Lori Culler (right), was named Athletic Director of the Year in the Crossroads League, in which Huntington University plays. Lori is the daughter of Garry and Lois Culler, who currently serve at the Mount Pleasant UB church in Chambersburg, Pa. (as does her brother, Bobby).

Culler has worked at Huntington University for the past 28 years as head women’s basketball coach and 11 years (1995-2001 and 2009-present) as athletic director.

It’s been a good year for HU athletics:

J.D. Collins, Crossroads League Commissioner, stated, “Lori Culler is a quiet but strong leader. She has led the Huntington University athletic department to success while maintaining two full-time jobs: athletic director and women’s basketball coach. Winning this award is a tribute to her work ethic and leadership.”

Culler also launched the HU Athletic Honor Roll this year, which includes students with a 3.5 cumulative grade point average. In its first year, 64 students were named.

Culler graduated in 1986 from HU, where she starred on HU’s 1984 NCCAA national championship basketball team.