06 May Staff/Faculty Openings at Huntington University

A variety of positions are open at Huntington University. They just announced an opening for Director of Alumni Relations. Other openings include:

06 May Worship Summit Underway in Florida 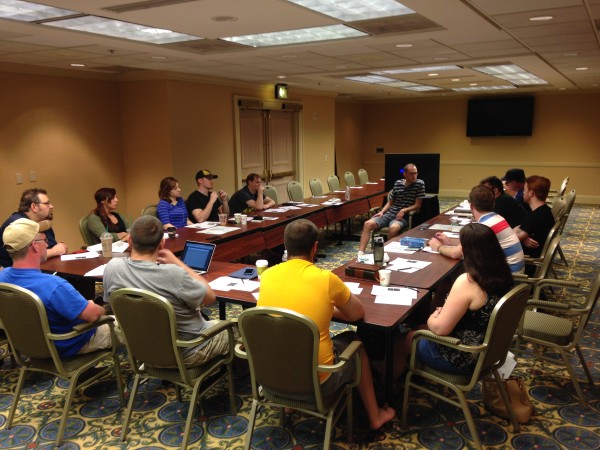 The 2014 UB Worship Summit is currently underway in Daytona Beach, Fla. This is a conference for UB ministers working in staff positions with music and worship. It is held every two years.

Thirteen persons are attending. The Worship Summit began on Monday and will continue through Thursday (May 5-8). The participants are: 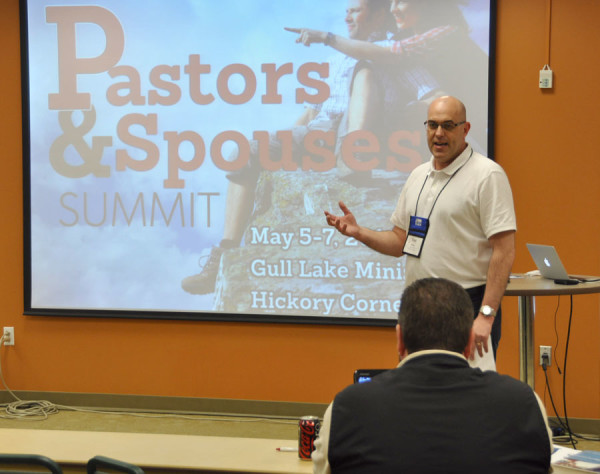 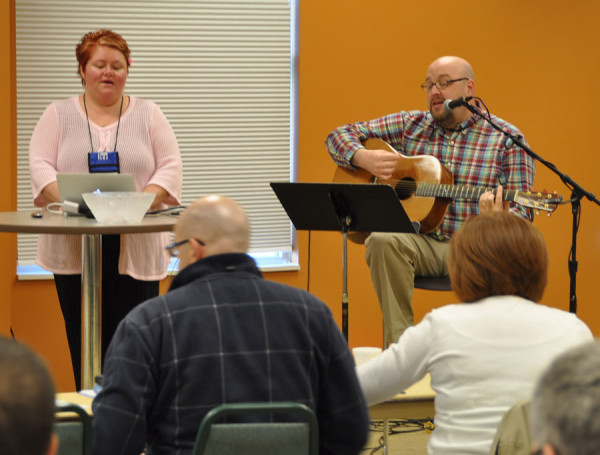 Brent and Loretta Liechty, from Pathway UB in Jackson, Mich., are leading music for the Pastors Summit.

Bishop Phil Whipple is the keynote speaker at the Pastors Summit. 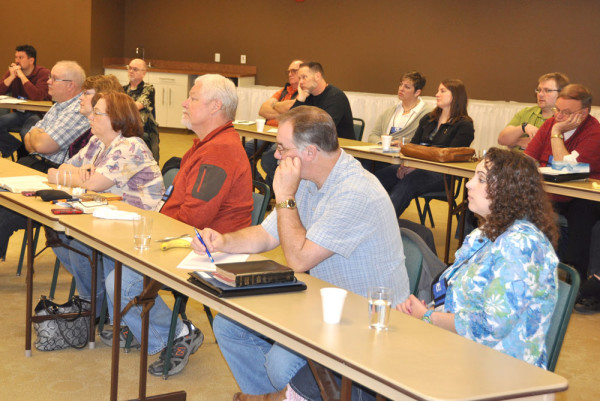 A group of 42 United Brethren pastors and spouses are attending.

The second Pastors Summit is underway at Gull Lake Ministries campground in Hickory Corners, Mich. This event is for pastors and wives from churches with an attendance under 150. An identical event was held last week at Rhode Grove Camp in Chambersburg, Pa.

There are 42  people attending–about the same as at the Pennsylvania summit. The attendees, most of them senior pastors and spouses, come from Ohio (18), Michigan (16), and Indiana (8).

02 May Project: Vehicles for UB Staff in Thailand 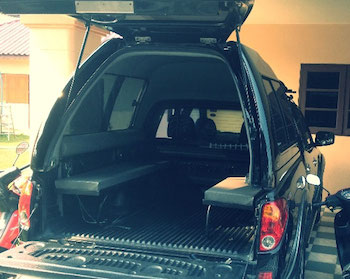 Aside from focusing on language and culture studies, Bryan and Emily Gerlach have begun work with a local ministry called the HUG Project. In addition, they worship regularly with a local Thai church and have begun to host short-term teams from North America. With growth in each of these areas, the need for a vehicle is becoming more apparent.

The vehicle would be primarily used for:

Upon the recommendation of local missionaries, local leadership and Thai Christian friends, Global Ministries has decided a truck would best suit current and future ministry needs. The intention is to add a cab cover and bench seats in the bed for transporting people. In Thailand, it is very common for people to ride in the back of trucks.

If you would like to donate toward this project,  please send your gift to:

02 May Easter at Our Church: Dayton, Iowa

On Good Friday, we were blessed to have with us Jeff Bleijerveld, the Director of Global Ministries. After enjoying a potluck supper, Jeff shared with us the work and goals of Global Ministries. We traveled through the different countries and learned of the mission work going on in each one. It is such a big world with an even bigger God!

On Easter Sunday, Dan Carrow was our lay speaker. He spoke about how Jesus conquered death. 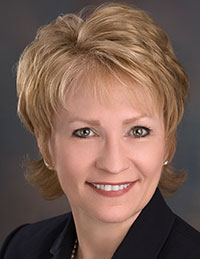 Sue Ellspermann (right), Indiana’s Lt. Governor, will deliver the Huntington University Commencement address on May 17. Ellspermann was elected to that position in November 2012. In her position, she manages six state agencies and serves as president of the Indiana Senate.

The Commencement ceremony will be held at 2:30 pm in the fieldhouse of the Merillat Complex at 2:30 p.m. The graduate hooding ceremony will occur at 10:45 am at the Church of the Nazarene in Huntington (1555 Flaxmill Road). The university will award master’s, bachelor’s and associate degrees to 288 graduates.

The day of Commencement also will include a breakfast for graduates and their parents, an awards ceremony for Professional Programs students, and the president’s luncheon.

02 May Easter at Our Church: Freetown, Sierra Leone

Easter at our church was very exciting, starting from Good Friday, when we had planned to paint our church. The board decided to do the painting on Saturday. Some youths and young adults offered themselves to do the painting, and the board chairman was their to supervise. We painted from morning until evening just to see our church beautiful while celebrating the resurrection of our savior.

On Easter the church was full with old members who have not been coming for services for a long time.We really thank God and hope they will stay forever.

02 May Easter at Our Church: New Lebanon, Ohio

Pastor Michael Sturgill (right) from Olivet UB was very happy to welcome Bishop Phil Whipple (and his wife Sandie) as our speaker at our afternoon Easter Sunday service. Our musical group, The Southern-Aires, provided southern gospel music for our congregation. This was followed by a nice dinner.

Our cluster and cluster leader William Flamer helped make this possible. Two other pastors in our cluster attended: Pastor Ed Harvey, (Lighthouse Community Church in Dayton) and Pastor Roland Albert (Park Layne UB Church in Dayton), along with some members of their congregation. The cluster also helped by passing out flyers in the area. This made the service a great time for outreach.

01 May The Pennsylvania Pastors Summit 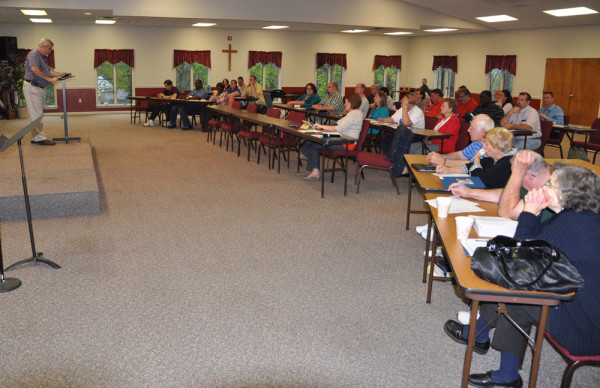 Bishop Phil Whipple speaking to the group on Monday night. 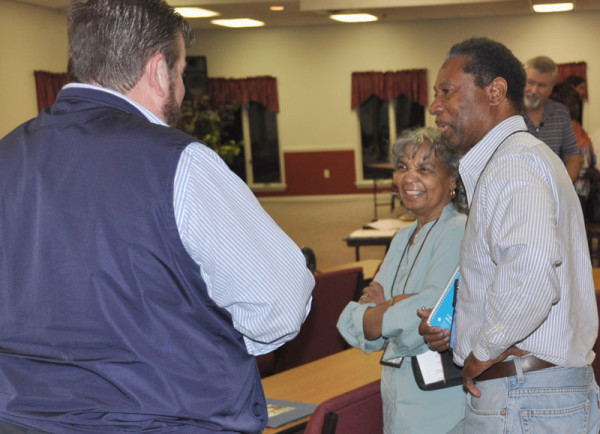 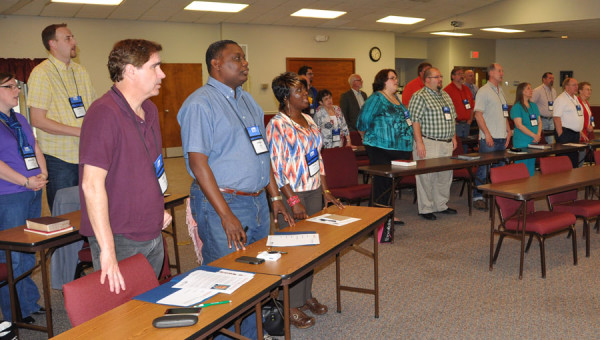 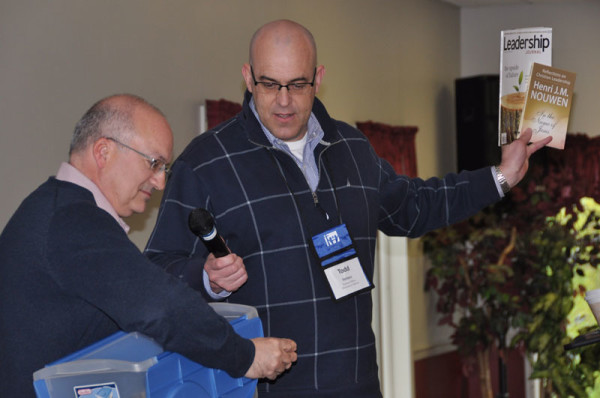 Drawings for prizes were a part of each session. Charles Milliken, pastor of the church in Franklintown, Pa., reads a name while Todd Fetters holds up the prize options. 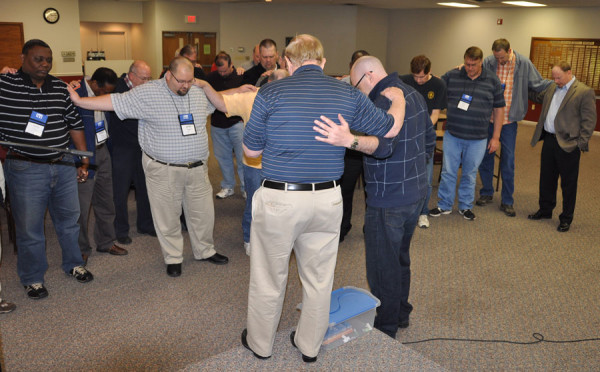 Four Pastors Summits will be held during 2014. The first was held earlier this week, Monday – Wednesday. It was for senior pastors and spouses from churches with an average attendance under 150.

A total of 44 persons attended, including 39 pastors and spouses from seven different states–Pennsylvania, Maryland, New Jersey, Virginia, Ohio, Indiana, and Kansas. Yes, Kansas. Michael Mattox, pastor of New Life UB church in Chanute, Kansas, came all the way out. Michael was assigned to that church at the end of 2013.

Todd Fetters, Director of National Ministries, spearheaded the event. Although he didn’t lead a session, he organized everything–the schedule, the coaching combinations, the music, etc.–and emceed the sessions. His wife, Lisa, led a session for pastors’ spouses–about a dozen of them–on Tuesday and Wednesday mornings.

Bishop Phil Whipple was the speaker for the three sessions. He opened on Monday night by telling about his journey as a minister, from his call to ministry through serving various churches both before and after joining the United Brethren denomination. It was fascinating stuff. On Tuesday he addressed principles he has learned along the way, and then spoke primarily about brokenness.

It was a rainy few days, so folks stuck pretty closely to the Miller Lodge, with its hotel-like accommodations. However, with Tuesday afternoon and evening free, some of the attendees ventured out to Gettysburg (45 minutes away), or simply to the mall or other local sites.

Coaching was a big part of the Pastors Summit. Pastors could sign up for a coaching session with one of the five trained coaches, all UB ministers: Dan Kopp, Greg Voight, Rocky Spear, Mike Brown, and Greg Helman. They had two sessions with their coach–an hour on Tuesday afternoon, and an hour Wednesday morning. These proved to be very helpful. Coaching is not counseling, and it’s not being told what you need to do. Rather, the person comes with an issue or situation, and the coach, through questions, helps the person come to a resolution of some kind–a way to deal with the situation. The coachees expressed much appreciation for what they gained from the sessions.

The Pastors Summit ended Wednesday morning with a group session during which pastors were invited to give a brief (no longer than 4 minutes) testimony which completed one of these statements:

The group was continuously in transition, since coaching sessions were going on at the same time; every hour, some ministers would leave and others would return. A fluid format was needed, and this proved to be just the thing.

All but two of the ministers presented something, a slice of testimony from their lives. It was most definitely a highlight of the event, as the ministers revealed interesting, occasionally surprising, and sometimes soul-baring parts of their lives, and explained how Jesus had worked in specific situations.

Another Pastors Summit, also for pastors of churches under 150 attendance, will be held next week at the Gull Lake conference center near Kalamazoo, Mich. The same number of people are signed up–about 45 total.

(Click on the photos below for a larger view.) 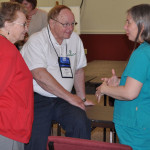 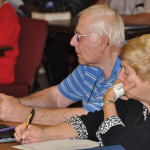 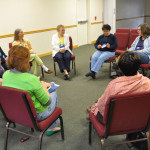 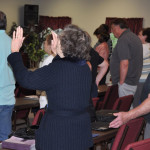 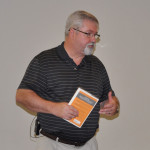 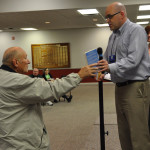 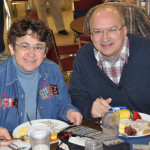 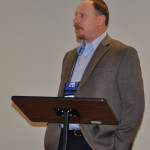 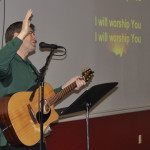 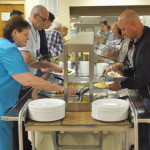 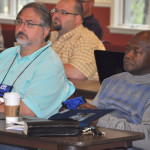 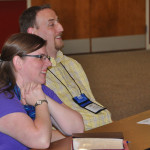 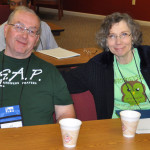 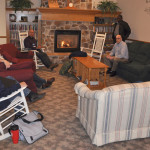 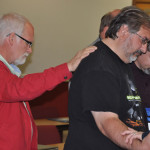 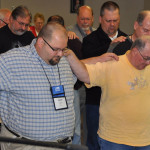