We were informed that Pastor Brad Kittle’s father had emergency surgery on Tuesday, July 2. He received 21 pints of blood, and was given a 10% chance of survival. Brad reported to a fellow pastor that his father is improving, but is not out of the woods. Brad (right) is pastor of Praise Point UB church in Willshire, Ohio. Surely he would appreciate your prayers. 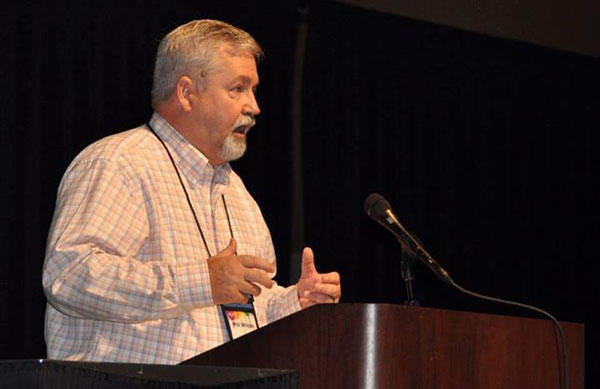 The major issue before the 2013 US National Conference last week involved the National Conference Covenant, which churches sign every two years. Substantial changes were being proposed. Everybody knew it would be a major source of discussion on the conference floor, and it was.

The National Conference Covenant was instituted in 2005. Every two years, all UB churches must sign the Covenant to remain part of the denomination. Through the Covenant, they reaffirm these six points:

Two other points were in the original Covenant, but were removed in 2007:

Over the years, various objections have arisen to the whole idea of the Covenant. Some folks found it a bit insulting that they would be required to re-up every two years. Did their commitment to the denomination need to be questioned?

Bishop Whipple has used the analogy of marriage in relation to another aspect of the Covenant. Imagine if a married couple were asked, every two years, to review their vows and decide if they wanted to continue the relationship. In the course of a marriage, there may come a time when, at the re-upping time, things were a bit rocky and, rather than sign up for another two years, they decided to go their separate ways.

In the same way, churches may encounter a Covenant-signing time when things aren’t going well, or when they have a pastor who is unhappy with the denomination for some reason, or when some other issue has arisen which sours them on being part of the United Brethren Church.

Churches also seemed administratively challenged with the task of completing and returning the signed Covenant. Churches would put it off, or just not get around to it. The two years seemed to go by very fast: “I thought we just signed it? Is it time to do it again already?” Pastors would claim to have lost the blank Covenant sent to them, or to not have received it altogether, and a new copy would be sent from the national office.

Even though the deadline for returning signed Covenants was February 15, the bishop always ended up signing a half dozen or more Covenants at National Conference, so that those churches could have a vote in the business session. That happened again last week. You can argue all you want about “What’s so difficult about signing and returning the Covenant?” But that’s just the way it is, and the way it has been.

The Executive Leadership Team discussed the Covenant, and ultimately advanced some major changes:

The six statements in the previous Covenant were rewritten into just four points:

As expected, a number of people addressed the proposal when it hit the conference floor, nearly all of them wanting to keep the two-year requirement. The other aspects of the Covenant proposal, such as how the statements were rewritten, received no discussion. The frequency of signing was the issue people most cared about.

But though the people who spoke nearly all opposed the change, the eventual voice vote fell strongly in favor of the proposal. It indicated that people had thought it through ahead of time. The regional meetings Bishop Whipple held during the spring no doubt influenced the outcome, since people heard the rationale months in advance, had opportunity to discuss it among themselves, and formed their own opinions before arriving in Fort Wayne.

There was one amendment. A line stated, “The Covenant shall be reviewed annually by the local board.” That was changed to, “The Covenant shall be reaffirmed annually by the local board.” It seems minor, but it carries some weight. A “review” could involve just reading through the Covenant statements, reminding everyone of the content. But a reaffirmation goes further. You not only review the statements, but say, “We’re still on board with this.” Local boards could even place a reaffirmation of the Covenant in their minutes once a year.

You’ll notice that the Covenant statements no longer require churches to participate in a cluster. Actually, clusters are intended for senior pastors, and their participation is required elsewhere in our governing documents. But there’s another reason. The cluster system is a method which could change over time, as happens to all methods. To ensure that the Covenant remains an enduring document, it seemed wise to keep methodology out of it.

As long as a church’s signed Covenant is kept on file with the national office, they remain a member congregation of the Church of the United Brethren in Christ USA, and are eligible to send lay delegates to the national conference. If the church refuses to sign the Covenant, or if they do not keep their commitment to the standards of the Covenant, the Executive Leadership Team has authority to terminate their membership in the denomination.

All UB churches will be asked to sign the Covenant one more time, prior to the 2015 US National Conference. After that, we ask only that the church board look over the Covenant once a year and reaffirm what they’ve agreed to.

02 Jul UB Named Citizen of the Year in Findlay, Ohio 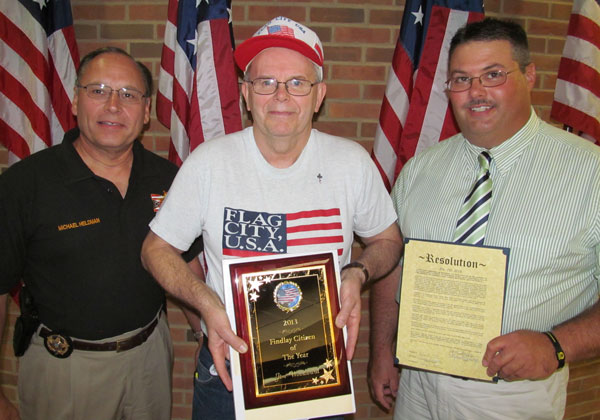 Jim Woodward, a member of Findlay First UB church (Findlay, Ohio), has been named Findlay Citizen of the Year. He received the award because of his extensive work in the Hancock County Jail ministry and his work promoting Flag City USA. When he addressed the Findlay city council, the first words out of his mouth were, “Before I say anything, I must first stop and say thank you to my Lord and Savior, Jesus Christ.” As a result of recognition, July 4th has been renamed, Jim (the Barber) Woodward Day in Findlay, Ohio.

Jim has a passion for fulfilling Matthew 25 where it states, “Then the King will say to those on his right, ‘Come, you who are blessed by my Father; take your inheritance, the kingdom prepared for you since the creation of the world. For I was hungry and you gave me something to eat, I was thirsty and you gave me something to drink, I was a stranger and you invited me in, I needed clothes and you clothed me, I was sick and you looked after me, I was in prison and you came to visit me.”

Many times after inmates are released from the Hancock County Justice Center, the first place they go is to Jim’s barber shop. There, he tells them that if they want a true turn-around in their lives, it starts with Jesus. Congratulations, Jim (The Barber) Woodward.

01 Jul Photos from the US National Conference

Nearly 500 photos from the 2013 US National Conference have been posted on Facebook. They are on the United Brethren Facebook page. You don’t need a Facebook account to view them–they are available for public viewing.

They are divided into separate albums chronologically.