09 May International Revival at Brooklyn Park 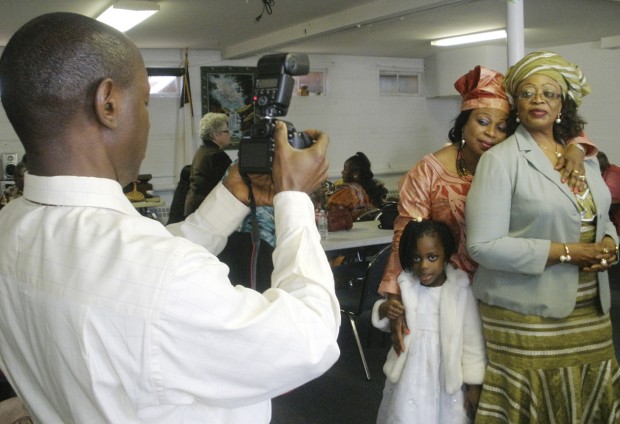 Abdul Kamara takes a picture of, from left, 5-year-old Fatmata Somtir with Rosaline Cook and Mamie Sowa during a luncheon following a revival service at Brooklyn Park United Brethren in Christ Church on Sunday. All four are members of Mount Zion United African Church in Philadelphia. The Brooklyn Park church held the revival as a way to celebrate its growing international community and its partnership with Mount Zion. Photo by Jennifer Donatelli.

Jennifer Donatelli, correspondent for the Maryland Gazette. Used with permission.

Leading a group of about a dozen women and girls from her Philadelphia church, Katie Kamara invited worshipers at Brooklyn Park Church of the United Brethren in Christ to join her in singing during a revival service on Sunday, May 5.

“Praise God! Alleluia,” she told the crowd of about 100. “Get on your feet! You are going to dance the African way.”

Some in the crowd looked around, perhaps a little nervously.

By the end of the service, which marked the end of the four-day revival, most were singing, clapping and dancing along with the Philadelphia church members, many of whom were from Sierra Leone in Africa. And that was exactly the idea behind the revival — to celebrate the Brooklyn Park church’s growth among people from other countries, said Rev. John Christophel (right), its pastor.

“It’s representative of what heaven is like. We should all be praising God together instead of waiting until we get there,” he told the crowd as they murmured and nodded. “We are united in faith, in God, and in our belief in each other.”

The seed for the expanding international focus was planted years ago when Christophel and Rev. Joseph Abu, Mount Zion’s pastor, attended college together, Abu said. Abu needed a place to host a group of alumni, and Christophel offered his church.

“It’s a joy. This is how it’s going to be in heaven. It starts now, so when we’re in heaven, there’s no problem,” he said.

During a meeting with Bishop Phil Whipple in January, he recognized the Brooklyn Park church’s growth among people from other countries, Christophel said. Besides people from Sierra Leone, the church has seen members from Jamaica, Trinidad, Nigeria and Liberia, as well as Puerto Rico.

The church even brought in a missionary from Africa, Rev. Samuel Sinnah, in November to help with the new focus. At times, the transition hasn’t been easy, he admitted. Americans typically are a little more reserved in their celebrating during services than Africans, who like rapid, upbeat songs and dancing, he said.

After the revival, Sinnah said the service was like a marriage of African and American traditions.
“It becomes a way of learning from each other,” Sinnah said.

Some longtime members of the Brooklyn Park church said they enjoyed the revival and listening to Abu preach.

“You get an assimilation of how they worship. They’re basically the same,” said Louanne Porter of Brooklyn Park, who has been attending the church for seven or eight years. “God’s behind it, and he made all races of people. We have to get together.”