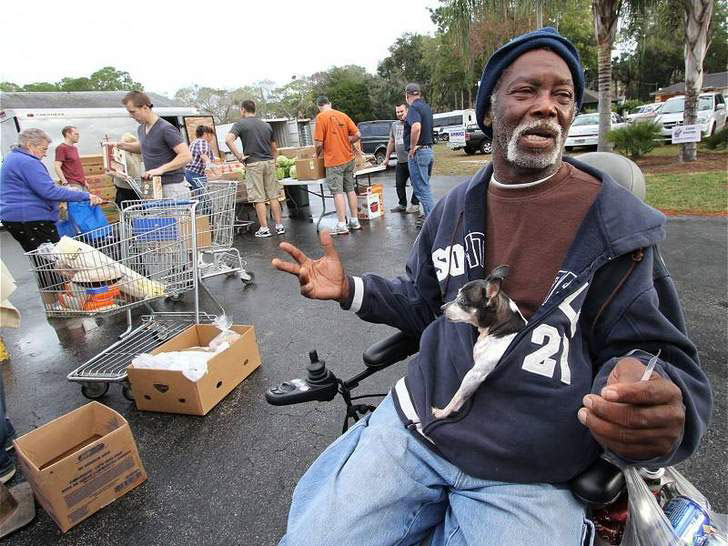 James Maddox waits outside the United Brethren In Christ Church in Holly Hill where food was being distributed to the needy Tuesday morning, January 8, 2012. Click photos to enlarge. (Photo by Jim Tiller for the Daytona Beach News-Journal) 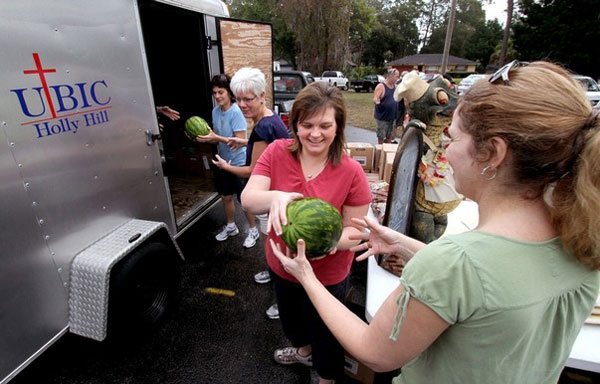 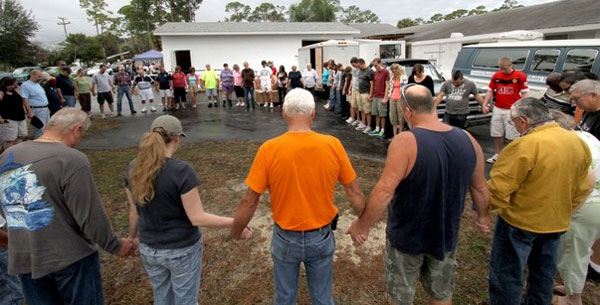 Pastor Chuck McKeown leads a group of volunteers in a quick prayer on January 8 outside First UB church in Holly Hill, Fla., before serving food. (Photo by Jim Tiller for the Daytona Beach News-Journal)

The reporting for this article occurred on Tuesday, January 8, 2013. At the time, the staff and spouses of Emmanuel Community UB church (Fort Wayne, Ind.) were in Florida on a staff retreat, and they took this day to serve at First UB’s food pantry. As a result, nearly all volunteers who appear in the photos are from Emmanuel. The article was published January 10, 2013, by the Daytona Beach News-Journal.

With his 15-year-old Chihuahua peeking out from inside his jacket, James Maddox rolls his wheelchair up to First United Brethren Church (Holly Hill, Fla.) to get in line for a large box of food after a half-hour ride in his motorized chair from his home.

The 65-year-old, who is on disability because of spinal and hip problems, has been getting help for about four years, starting when the food pantry was with another church in Holly Hill that closed more than a year ago.

The United Brethren moved the pantry from Open Bible Church in December 2011 after initially helping out the church at its location when Open Bible’s pastor passed away.

“We were afraid if we didn’t move it to our place, it would just go away,” explained Chuck McKeown (right, with wife Vicki), senior pastor of First UB church. “After we got involved with them, it became very clear it was something that was needed.”

A new building was constructed for the pantry, helping to serve more than five times the amount of people previously served, according to officials at Second Harvest Food Bank of Central Florida.

The small church in a short time has become the largest single-site pantry in Volusia County that receives food from Second Harvest, not including Halifax Urban Ministries and its five locations, according to Bob Thomas, branch manager in Daytona Beach for Second Harvest Food Bank.

“They are the only food pantry in Holly Hill,” Thomas said. “They are getting inundated with clients and get overflow from Ormond Beach and Daytona Beach.”

Maddox said the church helps him with food because the food stamps he receives don’t last the whole month.

“This helps get me through,” Maddox said. “They are a good church — more than excellent. I’ve seen some (church volunteers) go into their pocket and help you out.”

First UB spent about $31,187 on food in 2012, serving about 71,000 people and distributing almost 673,000 pounds of food. The total number of people served includes people coming to the pantry more than once.

The church served 21,824 people in the last few months of 2012, compared with 3,673 people in the previous location for April, May and June 2011, according to Second Harvest.

Overall, Second Harvest and its agencies in Volusia County distributed 4.4 million pounds of food last calendar year, up about 1 million pounds from 2011.

At First UB, more than 150 volunteers help the food pantry, which also provides hygiene products and other items. The church gives out about 840 boxes of food a week, on Tuesday and Thursday from 9 a.m. to 1 p.m. and between Sunday church services.

People can come twice a month, but any new clients may be even more limited on how often they can get food.

“People get between 30 and 40 pounds of food. We don’t turn anybody away,” McKeown said. “There is a great need in the Holly Hill area. People aren’t finding jobs. Things aren’t getting better.”

First UB, which has about 350 people attending three church services on Sunday, also took over the private K-12 school from Open Bible Church and serves about 90 students. McKeown’s youngest son, Josh (left), is the youth pastor and principal of the school. Josh and his brother, Matt (right), do most of the preaching on Sunday, their father said.

Jeff Lilly, one of the officers from Open Bible Church who was also the temporary pastor, said church members thought they would have to shut down everything after their pastor, James Baker, got sick and later died.

Joyce Dismuke, 57, of Holly Hill, who is on disability, has received food off and on for a year from First UB.

“They have been a blessing for me. I love when they pray with us, too. The people here have a beautiful attitude,” said Dismuke, who also gives extra food she receives to other neighbors who need it.

Keith Chandler, 57, of Holly Hill, also said his food stamps don’t provide him enough to get through the month. He walks with a cane from knee problems.

“They are friendly and helpful to us,” Chandler said before volunteer Jon Cavarretta carried out his food.

Cavarretta likes helping, especially the children whose “faces light up when you give them a huge cake.” 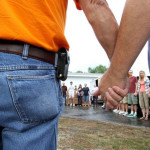 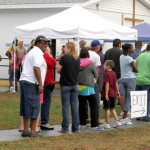 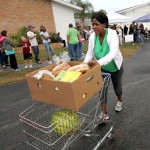 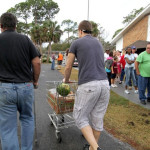 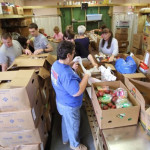 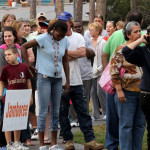 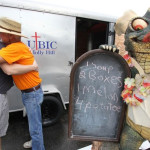