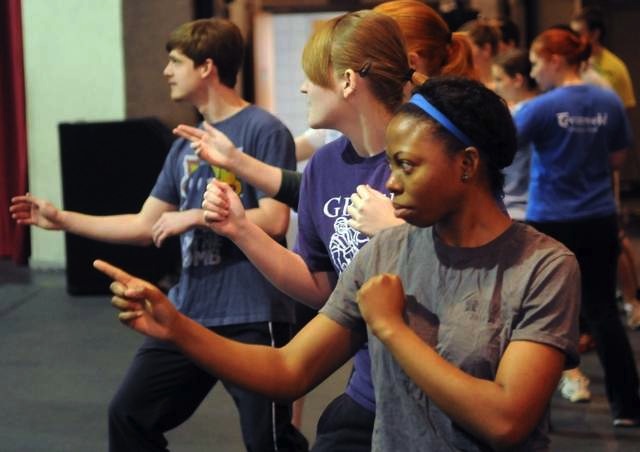 Ellie Bogue of The Fort Wayne News-Sentinel. Reprinted by permission.

Swordplay was the lesson of the day Thursday, January 17, at Huntington University.

Students are on their J-term semester, which lasts through January. Many of the classes count toward electives in their majors; they can pick from a variety of classes that aren’t available the rest of the year. For one group of students this meant stage combat class, where they learn how to create combat scenes. Their teacher for the session is John Lennox, who has a doctorate in theater arts.

Lennox said many of the students are theater arts majors, but a few took it because they thought it sounded interesting. Lennox, who lives in Jackson, Mich., travels the world, teaching the art of onstage combat.

He specializes in Western martial arts and has had weapons training in long sword, short sword, broadsword, hand-and-a-half sword, two-handed sword, foils, katanas, scimitars, and various other edged weapons. He also is trained with various types of handguns and automatic rifles, among other weapons.

On Thursday, Lennox was teaching how to use the side sword. Half the battle in swordplay appeared to be learning the footwork. Starting from a ballet first position – think heels together, toes out – one has to slide their lead foot forward, or sideways, depending on which direction you are going.

The stances involve a lot of lunges; it looks somewhat like yoga postures. In fact, Lennox had a yoga teacher in one of his former classes who described it as “just like yoga, with dangerous props.”

For a good hour the students were run through the footwork positions, each of which had a name.

There was a lot of laughter and a few exclamations from the group.

“It burns!” said one young woman as they went into what looked like a deep lunge.

Chloe-Ann Shaw, a theater arts major, had a look of fierce concentration on her face as she moved back and forth across the stage. She admitted she took the class because it sounded like fun, but it has turned out to be some work, as well.

Melanie Lubs, one of two assistants helping out with the class, is a recent IPFW graduate in the Theater Art program. She took Lennox’s workshop a year ago and since then has gotten a basic certification in stage combat. She now teaches a semester-long stage combat class at IPFW.

Lennox said with the increase in movies that use these skills, like “Lord of the Rings,” there has been an increased interest in students wanting to learn the art.