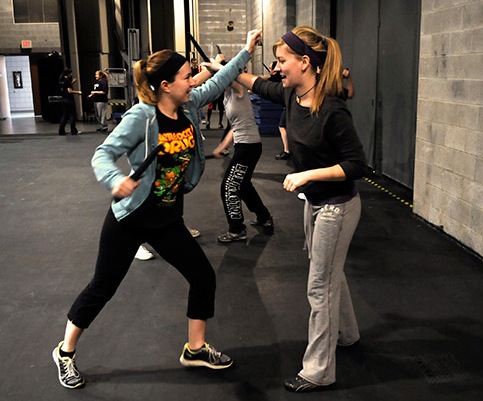 Students in the J-Term class on stage combat.

During January, Huntington students have the unique opportunity to take one concentrated class for credit. Some students spend “J-Term” on campus, while other travel abroad or are placed in internships. J-term runs this year from January 7-23.

In “The X-Files: Quest for Truth,” Dr. Lance Clark (right) is challenging his students to discover how the post-modern world yearns for the spiritual while exploring the supernatural aspects of “one of the greatest television series in the history of TV,” he said.

“Most, if not all, of the students in the class have never seen an episode of ‘The X-Files.’ They are discovering it for the first time and soon become huge fans,” he added. “We have great class discussions on metaphysics, transcendence, and the pursuit of truth in the Christian faith.”

In “Contemporary American Hip Hop and Biblical Prophecy,” Professors Dr. Del Doughty and Heath Pearson are examining the history of hip hop from its roots in the black church to its movement to mainstream.

In “The Heroic & the Ordinary,” students drill down and explore heroes and the meaning of “ordinary” via a wild range of films and other materials, such as novels and poetry, with Professor Mike Hertenstein.

In Drs. Tanner Babb and Paul Michelson’s class, students are taking a trip to Middle-earth and back again with a study of “The Hobbit” and its place in J. R. R. Tolkien’s creation of “The Lord of the Rings.”

In the theater, students are learning what it feels like to be a part of the movies by learning basic stage combat. Students work with John Lennox, who has taught stage combat and choreographing at workshops around the world. He has more than 20 years of experience in the craft.