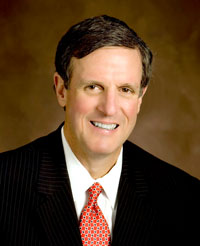 After 22 years as president of Huntington University, Dr. G. Blair Dowden today (October 19, 2012) announced that he plans to retire. Dowden, 60, informed the Board of Trustees, during their October 18-19 meeting at the college, that he will retire at the conclusion of the current academic year.

“President Dowden has been quietly considering retirement from Huntington University for some time. He initiated this transition now to give the Board plenty of notice, assure an effective transition of leadership, and to maintain institutional momentum,” said Kelly Savage, chair of the Board of Trustees. The firm Carter-Baldwin Executive Search has been retained by the Board to begin a national search for Dowden’s successor.

“Huntington University has experienced remarkable growth and success under President Dowden’s leadership, and we are very grateful for his 22 years at the helm,” said Savage (left).

Dowden became the 12th president of Huntington University in 1991.

“Blair’s interest has been, and continues to be, others,” said former bishop C. Ray Miller (right), Board of Trustees chairman emeritus. Miller was bishop when Dowden was selected in 1991 to succeed Dr. Eugene Habecker. “When we first interviewed Blair Dowden, I saw him as a people-person. After 20 years, he continues to send cards and best wishes. Blair has been God’s man for HU at this time, and we have been extremely fortunate to have him stay with us for 20 years.”

Dowden came to Huntington at a key moment in its history. Most campus facilities were new, and a well-credentialed faculty was in place. But with only 614 students enrolled, Huntington struggled for name recognition and financial sustainability.

In his first report to the Board of Trustees, Dowden laid out a vision for making Huntington one of the top Christian colleges in the country. The plan called for “increased integration of Christianity in…all areas of institutional life.” Aggressive enrollment goals were based on the development of distinctive academic programs. The plan included increased financial support and greater public awareness of what Huntington had to offer. This vision was not about building an institution, but rather about equipping students to change the world.

“Huntington University has a very bright future,” Dowden said. “The university has a compelling mission in Christ-centered higher education and a strategic vision for the future. Current initiatives — from the development of an occupational therapy doctoral program in Fort Wayne to the exploration of a branch campus in Arizona — demonstrate that Huntington University is nimble, entrepreneurial, and poised for further growth.”

Under Dowden’s leadership, Huntington University achieved a reputation for academic excellence, moving from the second tier to the Top 15 among Midwestern baccalaureate colleges ranked by U.S. News & World Report. Huntington was recognized five times on the magazine’s list of best values in the region. Huntington University has also earned recognition from The Princeton Review as a “Best Midwestern College.” Forbes includes Huntington on its elite list of “America’s Top Colleges.”