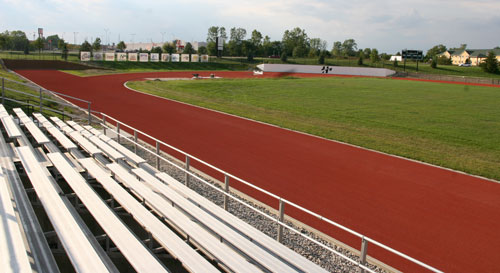 The new track at Huntington University.

In 2010, Huntington made renovations to Becker Hall (the Administration Building) to update the building and to create space to house the digital media arts program. The biggest renovations were to Davis Hall, on the third floor. It now supports a film studio with a greenscreen, a stadium-seat theater, faculty offices, editing rooms, and an equipment cage.

The DMA department named the Martin Center for Digital Media Arts in honor of Jerry and Elsie Martin and their support of the recent capital campaign. The ceremony was held on the third floor of Becker Hall.

Over the summer, the university renovated and resurfaced the track and field stadium. The stadium was named the King Track and Field Stadium in honor of longtime HU coach Tom King (right).

King first came to Huntington in 1970 as the dean of men. Over the next four decades, he coached more than 94 All-America Scholar Athletes. His athletes have earned more than 53 All-America honors, including four-time national shotput champion Jim Arnett, two-time national champion John Ngure, and national runners-up Danielle Vohs and Jenny Keil. Teams and individuals coached by King have competed at the national level many times. He has also been named MCC Coach of the Year in 32 of the past 44 years.