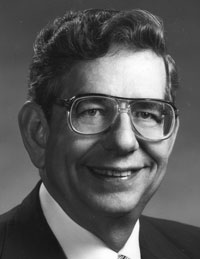 Dr. Sites was elected bishop in 1977 and served for 12 years, retiring in 1989. Prior to that, he served in pastoral ministry at these United Brethren churches:

Dr. Sites graduated from Huntington University in 1958, and from the HU seminary in 1961 with a Master of Divinity. He was ordained in 1961. Huntington University awarded him an honorary doctorate in 1978. He earned a Doctor of Ministry from Trinity Evangelical Divinity School (Deerfield, Ill.) in 1986.

During their retirement years, Dr. Sites and his wife, Mossie, did short-term mission work in Macau and at Jamaica Bible College. He and Mossie were married in 1946 and had three children.

Cards can be sent to Mossie Sites at: