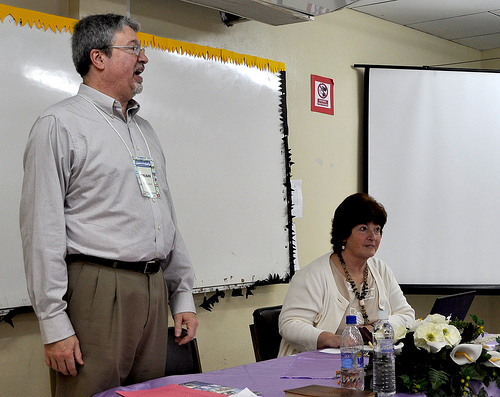 Since General Conference reports were given in alphabetical order, Canada went first. Brian Magnus, bishop of the United Brethren Church in Canada, opened his report on January 11 by talking about the secularization of his country.

“I believe North America is coming to a place, soon, where Europe has been for a while. People are already calling North American post-Christian. Christian values are being dropped all over the place. Marriage in Canada is now between any two persons, regardless of sex.

“I predict that very soon, polygamy will be legal in Canada, too. We have many people who have immigrated from Muslim and other countries, and they want to bring over their second, third, and fourth wives. Marriage itself has dropped in popularity; the majority of people simply move in together and never get married. The divorce rate has gone down, but it’s only because so few people get married.

“We have a partnership with a Christian organization called Christian Horizons which provides services for handicapped people. A case currently making its way to our Supreme Court will affect all Christian organizations in Canada. One of the 3000 employees of this organization had signed an agreement to live by Christian values, but then she entered into a lesbian relationship and was fired.

“The country has become very secular. But we want to take advantage of the opportunities we have, and not just feel sorry because our country is changing. God has us there for a reason. We want to be his servants.”

22 Jan On the Ground with Samaritan’s Purse

Global Ministries has a partnership with Samaritan’s Purse, a Christian relief organization. They are one of two organizations (with CH Global) through which we are channeling financial support for Haiti earthquake victims.

“Right now I’m with a group of surgeons and nurses that came to Haiti to help treat patients at the Baptist Haiti Mission hospital. The 100-bed hospital is in the mountains, about 20 miles outside Port-au-Prince. The hospital wasn’t damaged by the earthquake, so it’s being overwhelmed with injured people seeking help. The hospital staff had to put mattresses on the hallway floors to make room for everyone.

“Many people have broken and crushed bones. Others have head wounds and injuries from being struck with falling debris. Since we arrived yesterday, three people have died. At the same time, 11 people accepted Christ in response to the ministry of a team of chaplains who are here from the Billy Graham Evangelistic Association. In the midst of the tragedy, people are being saved.

“When I asked one of the surgeons, Dr. Lealand McClusky, how it was going, he took a deep breath and said, ‘You could get overwhelmed by the chaos of it, but you just have to go to work. We’re trained to step into emergency situations and just get started, doing what we know how to do.’ All of the doctors and nurses have the same great attitude and want to do all they can to help.”

Global Ministries is sending Haiti relief funds through two Christian organizations with which we have a partnership: CH Global and Samaritan’s Purse.

“I’ve been in communication with Elsa Hiaire (Country Coordinator for CH Global) and Pastor Oliam Richard of the United Brethren in Christ. They expressed some of the current immediate needs, which vary from fuel to clean water and basic medical supplies. Thankfully we will be able to deliver these goods.

“We have also received a significant donation of portable water filters from a Florida-based Sawyer Water Filtration Inc. These filters operate on gravity and not electricity, and can be used to purify water making it potable and immediately available for consumption. CH Global will deliver these filters to United Brethren churches as well as to key areas in Port-au-Prince.”

Thus far we have forwarded $5000 of the donations we received to support CH Global’s efforts to help our UB churches in Haiti.

In addition, we forwarded $7000 to Samaritan’s Purse for Haiti relief. Samaritan’s Purse teams are working with a network of pastors to distribute critically-needed relief supplies for victims of the massive earthquake that rocked Haiti last week. They are distributing supplies such as hygiene kits, plastic for shelters, blankets, and solar flashlights to beneficiaries located in and around Port-au-Prince. This distribution network is expected to provide aid to at least 300 families per day. 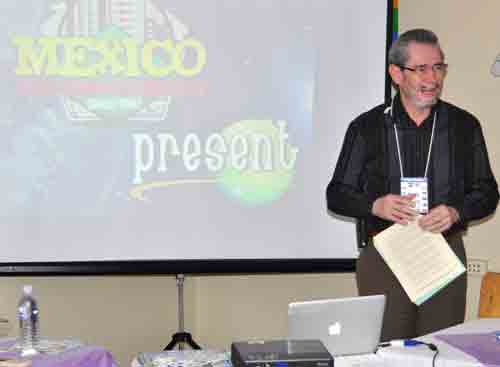 Denis is a native of Honduras who was brought by Global Ministries to the United States to found Latin American Ministries, a major attempt to establish United Brethren churches among Hispanic people.

While in that role, he began working with a number of churches in central Mexico. In 2005, those churches were accepted as a UB national conference. Denis, though he actually lives in the Los Angeles area, serves as bishop of the UB churches in Mexico.

Here are some highlights from his report. 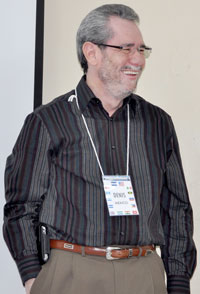 United Believers in Christ Fellowship consists of churches in California which withdrew from the denomination in 2005. However, they are raising funds for Haiti to be channeled through UB Global Ministries. 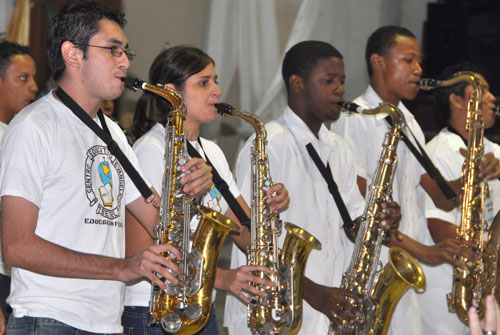 I’ve written about the Bethel Band a number of times over the years, going back to the 1980s, when missionary Archie Cameron led it. The band is part of the Bethel Institute, a large school operated by our Honduras Conference.

The Bethel Band has won many honors over the years. They won a competition as the best band in Central America.

But I had never heard the Bethel Band perform. I heard them practice one time, when I was in Honduras writing Tio Archie (one chapter is devoted to the Bethel Band). But I’d not seen them perform.

Until a couple weeks ago, when I was in Honduras for General Conference. 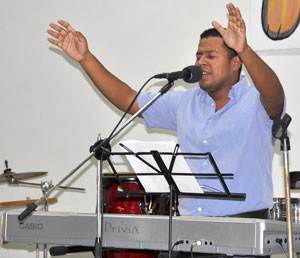 David Raudales, director of the Bethel Band, played in worship teams throughout the week of General Conference.

During the opening service on Sunday, January 10, the Bethel Band marched to the front of the gymnasium and played two numbers for us. They were extraordinary. Just blew me away.

I was sitting on the front row when they lined up, the saxophone players right in front of me. When the music started, the sax players began stepping toward me, and I thought they were going to run me over.

I knew they’d be good musically. I was not expecting all of the movement. I mean, they MOVED. I particularly enjoyed watching the three guys whirling around with their bass drums.

So much music, so much sound, so much movement, so many instruments. And the thing is–they were at half-strength. School was not in session at that time of year, but director David Raudales still managed to round up 50 of his 100 band members for a voluntary performance.

David is the son of Francisco Raudales, the former Honduras Conference superintendent. Francisco grew up playing in the band and later directed it, before passing the baton to his son.

David hopes to expand the band’s size to 150 members. The limitation is instruments. They’ll gladly take that trumpet or flute collecting dust in your attic. Why not send it to Global Ministries, so we can put it in the hands of a young Honduran? Give an opportunity to a kid who would just love to make music with Central America’s premier band.

In September, the Bethel Band will travel to Guatemala for another big competition. About 50 Guatemalan bands will compete against each other, and the winner will then go against a dozen or so bands from other countries. Bethel has won this competition in the past. After what I heard that Sunday in La Ceiba, I can’t imagine that they won’t be winning it again in the years ahead.

Enjoy these photos of the Bethel Band performing at General Conference.

Huntington University has as partnership with Star 88.3. a contemporary Christian radio station in Fort Wayne, Ind.

An article about the event in the online Journal-Gazette gave this information:

NBC Nightly News ran a segment on Mission of Hope on January 19.

20 Jan HU Graduates in Haiti with Mission of Hope

You may have seen this compelling report Tuesday night (Jan. 19) on NBC Nightly News with Brian Williams in their “People Making a Difference” segment. Brad and Vanessa Johnson are Huntington University graduates (1993 and 1994 respectively). They, and their organization Mission of Hope, are on the front lines of the earthquake relief effort in Haiti, truly impacting our world for Christ.

Mission of Hope–orphanage, medical clinic, school, and church–is located about 20 kilometres from Port-au-Prince. For now, scores of orphans are living outside until they can be sure the buildings are safe. Says Vanessa, “We’ve pitched tents and have tried to make it as fun as possible, like a camp-out experience.”

They have enough fuel to keep the generators going for a few weeks. Donations have poured in.

On Friday night (Jan. 22), a concert in Nashville by Christian artists Michael W. Smith, Nicole C. Mullins, Dave Mullins, Cindy Morgan. and Tommy Sims will raise money for Haiti. Three charities will split the proceeds. Mission Hope is one of them.

Some other links about Mission of Hope: 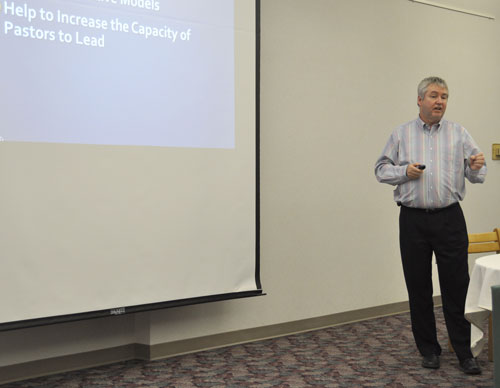 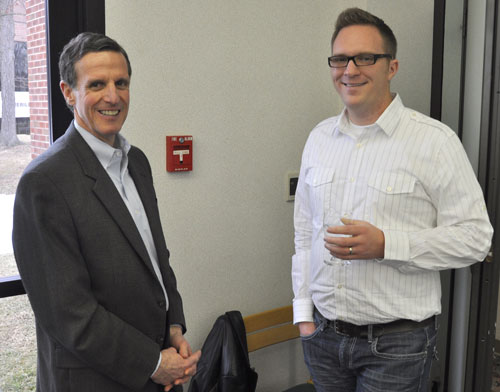 Andy Sikorra (right), who will be planting a UB church in the Cleveland area, with Huntington University president G. Blair Dowden.

The Executive Leadership Team met Monday night and Tuesday morning (January 18-19) at Huntington University. This was the first time the ELT has met since Phil Whipple was elected bishop, though they’ve handled several items of business over the internet.

The plan was to handle all business during the two hours on Monday night, and reserve Tuesday for talking about church planting. They stuck to that plan.

On Tuesday morning, after a devotional by Bishop Whipple, the ELT heard from Andy Sikorra, who will be planting a church in the Cleveland, Ohio, area starting next fall. Andy is originally from Texas, but his family moved to northwest Ohio and attended New Hope UB church in Bryan, Ohio. He attended Huntington University, and is now on staff with a Southern Baptist church in Cleveland.

Bishop Whipple then guided the ELT members into an open discussion about church planting. Our denomination was born out of aggressive church planting, but in recent years we’ve not done so well at starting new churches. It’s something everyone agrees we need to get a better handle on. 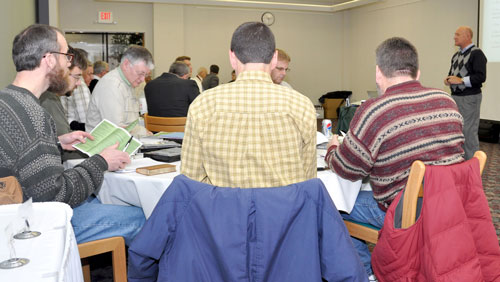 Today, 22 cluster leaders came to Huntington, Ind., for several hours of training with Bishop Phil Whipple and Denny Miller, pastor of Emmanuel Community Church (Fort Wayne, Ind.). They met in the Habecker Dining Commons at Huntington University. Denny Miller works one day a week as Director of Healthy Church Ministries. He led much of the training.

Here are some photos from the event.