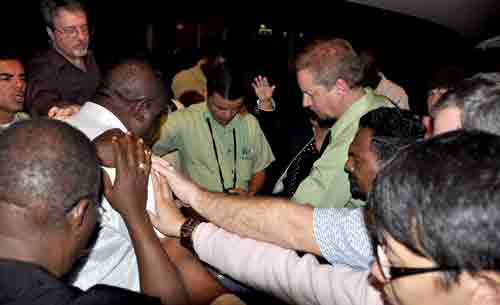 The day opened with sadness, which was actually a carry-over from Tuesday: the terrible earthquake in Haiti. Oliam Richard, our Haitian superintendent, was terribly concerned, especially since his wife, Esther, had flown into Haiti the day before the earthquake.

Oliam spent the night glued to CNN and seeking information on the internet. This morning, he felt he must try to get back to Haiti, and we can understand that.

Denis Casco, bishop of Mexico, took him to the La Ceiba airport to check on connections. There were none. They could get him to Tegucigalpa, Honduras, but couldn’t make any promises beyond that.

So, Denis urged Oliam to stay in La Ceiba, where he had accomodations, and Oliam agreed. However, he skipped the General Conference meeting today, staying at the hotel and no doubt gleaning whatever news he could of Haiti. He tried various ways to get through, but in vain.

During tonight’s closing service at the Bethel II church in La Ceiba, the congregation (and it was packed) took up an offering for Haiti. Rev. Richard didn’t attend the evening service. However, back at the hotel, all the General Conference delegates gathered around him, and the money was presented to him by Marilyn Reeck. Then the delegates laid hands on him, and several prayed aloud for him.

We’ll just need to pray that during the next few days, amidst the exstreme chaos, Oliam will be able to reach not only Haiti, but his wife Esther.