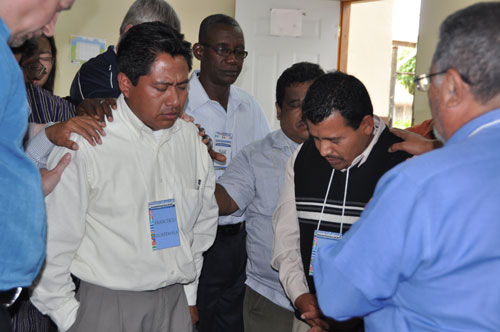 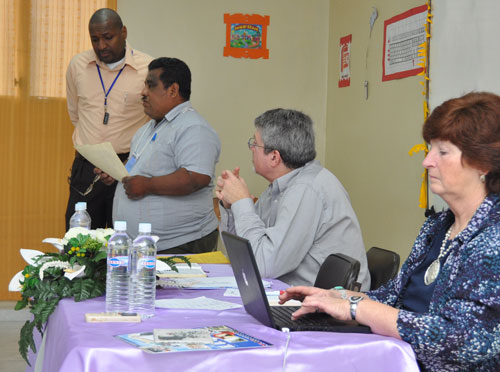 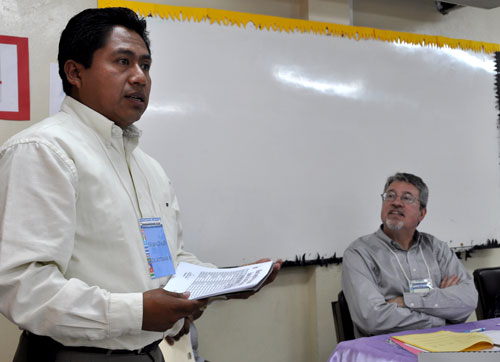 Francisco Najera talking about the work in Guatemala.

Up to this point, Guatemala has been a mission district of Nicaragua Conference. Juan Pavon Pavon, superintendent of Nicaragua, gave the background.

A leader from his church in Masaya, Nicaragua, was on his way to Mexico, but had to stay in Guatemala for a couple days. He met a family that was interested in starting a church, and they inquired about the United Brethren. One thing led to another, and Juan Pavon received an invitation to come visit Guatemala.

Juan spoke to them about United Brethren doctrine and the way we work, and they liked what they heard. Things took off from there. A church started in that neighborhood, and now there are many branches in that neighborhood. They also worked to secure the proper legal documentation, and to organize a board of directors according to Guatemalan law.

Juan then asked Superintendent Francisco Najera to share more about the work in Guatemala.

Francisco was there from the beginning. “When the work was starting and I arrived at the location, I reconciled to God at that church.” He said some new churches started when members relocated, others through friendships they developed with other Christians who have now joined them and accepted the United Brethren vision.

“In Guatemala, it is not very hard to establish a church,” he said. “I live in an area with 50,000 people. There are no churches with 1000 members. That tells me a great outreach can be done. There are many churches, but more people to reach.”

He also gave this information:

The recommendation from the examining committee stated:

Having reviewed the governing documents and interviewed representatives of the General Conference, we do hereby recommend their acceptance as a national conference of the United Brethren in Christ.

Together with this recommendation, we would also recommend that we continue working with this new conference to provide opportunities for continuing education for its pastors and leaders, particularly in regard to United Brethren theology and doctrine.

Bishop Billy Simbo of Sierra Leone said, “I move that we accept the recommendation.” It was approved unanimously.

Bishop Brian Magnus of Canada then directed everyone to gather around the two Guatemalan delegates, Francisco Najera and Rolando Valenzuela. They laid hands on them in prayer as Rev. Jose Ramirez of Honduras prayed.