Congratulations to three wonderful servants of the church who received honorary degrees from Huntington University on Saturday. 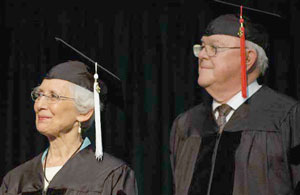 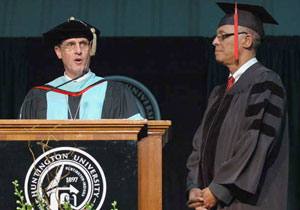 Russ and Nellie Birdsall (right) have served the Lord as a team in a variety of capacities–as missionaries in Sierra Leone, in administrative positions at Huntington University, in the pastorate, as conference superintendent, and most recently, during 11 stints as short-term missionaries in Jamaica and Macau.

Owen Gordon (right, being recognized by HU president G. Blair Dowden) is a long-time leader in Jamaica Conference. He is currently president of Jamaica Bible College in Mandeville, and also pastors a church.

Nine people from Jamaica, including Superintendent Winston Smith, were on hand to see Rev. Gordon receive his honorary degree.