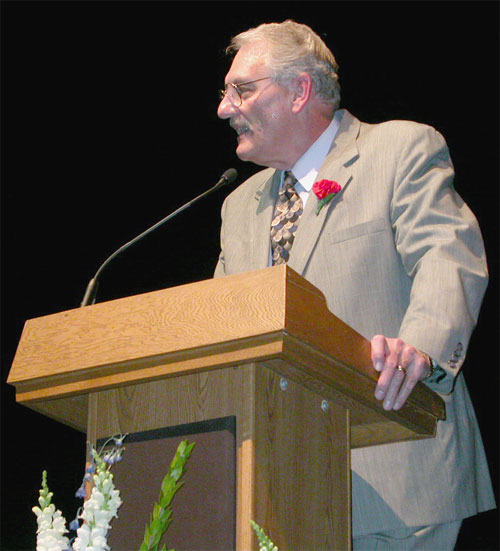 The US National Conference, our highest governing body, met June 20-23 and adopted a number of major changes.

Rev. Ron Ramsey (above) was elected on June 23 as the new bishop of the US National Conference. He will take office on August 15. Bishop Ramsey has served as pastor of the Main Street UB church in Walbridge, Ohio, for the past 12 years. You can read his biographical information and vision statement online.

The Property referendum was passed. It gives local churches title to their property. In the past, such property has been held in trust by the denomination.

Every church will be required to participate in what is called a cluster. Clusters will consist of an average of seven churches, and will be led by a cluster “coach.” This will become a primary group for pastoral and congregational accountability, and it represents the single most significant change in structure adopted by the conference. There will be about 30 clusters in the United States.

To be a full-member United Brethren church, all congregations must now sign a covenant every two years. It requires agreement with seven statements. The covenant represents a major change for the United States churches.

The conference elected a new Executive Leadership Team, with representatives elected specifically from each of four geographic regions.

The UB stand on alcohol was changed. The United Brethren church will continue to stress and encourage total abstinence from beverage alcohol, but will no longer require abstinence in order to hold local church membership (though this requirement will remain for ministers).

Gary Dilley was reappointed as Director of Global Ministries, and G. Blair Dowden is now Director of Education by virtue of being president of Huntington University. Bishop Ramsey has chosen a new person to come on staff in a director-level role in what has been called “the Healthy Church Director” (though the official title may be different). The selection will probably be announced later this week.

All changes will be published online as the official wording becomes available. Right now, the official minutes of the conference are being finalized.

The international General Conference, with delegates from the other seven constituent national conferences–Sierra Leone, Jamaica, Honduras, Nicaragua, Canada, Hong Kong, and the USA–began on Thursday afternoon, June 23, and continue into Friday. Two new conferences were accepted: Mexico and the Phillipines.