Saddleback Community Church offers the “40 Days of Purpose” program for $750. However, you can get it for $500 by ordering through the United Brethren denomination. However, registration at this rate ends January 19.

The PurposeDriven website has much information about 40 Days of Purpose. Here is an excerpt: “Over 8,000 churches from all 50 states and 19 countries have now participated in 40 Days of Purpose. Many of these churches have reported that it was the most transforming event in their congregation’s history. Hundreds of pastors have written or called saying, “Our church will never be the same” and ‘This is the greatest thing that has ever happened in our church.’ One pastor wrote, ‘I’ve seen more growth in our members and our church in 40 days than in the previous 13 years.’

“Through 40 Days of Purpose, thousands of people have come to Christ, been baptized, welcomed into membership, connected to a small group or Sunday School class for fellowship, taught the meaning of real worship, equipped for personal ministry, and commissioned to fulfill their mission in the world.”
January 13, 2004

Kent and Carol Maxwell are currently in their second year at the Caribbean Graduate School of Theology in Jamaica. Kent was previously pastor of New Hope UB church in Huntington, Ind. On December 21, Kent wrote the following:

“We are again faced with making another decision in regard to continuing at the Caribbean Graduate School of Theology for a third year. When we went to CGST in the summer of 2002, it was for only one year when a national was to return to the Graduate School after completing her doctoral studies in California. However, that did not happen. She expects to complete the degree in the summer of 2004; however, she desires to remain in California to complete the internship required to be licensed in the State of California as a psychologist and to get certification from the American Psychological Association.

“Hence, the Graduate School has asked us to return in the fall for another year and longer if we would be available. After next year, it would be to direct the Master of Divinity program. Please be in prayer for us as we struggle with this decision. There certainly is a strong pull to remain and complete the task I began and possibly to help strengthen the M .Div. program later. There is an equally strong pull to return to our home in Huntington where we would be nearer to our children, visit family and friends, and opt for a slower lifestyle. Carol much prefers to remain in the States. We are really serious in requesting your prayers for us in this very great decision.”

James Holloway resigned as senior pastor of the Coleta church as of December 31. He will not be reassigned. The Coleta Church will be using several different people to fill the pulpit for now.

Lamar and Karen Crumbley, who had been helping with the Macau English Language Program since September, returned to the States on December 27. Russ and Nellie Birdsall arrived on January 10, and will serve as volunteers in Macau through May. This is their 6th time to Macau.

The ELP hired a new secretary, Tommas, who started working on January 2. His first two months will be on a trial basis.

“On Sunday, January 4, we had impromptu 40th anniversary celebration of having church in that building. Among those present were ten members who were there 40 years ago, including Archie Carpenter, who will be 90 in June 2004. They were asked to share what they had remembered about that day. Some shared how they met in the basement part of the building because the upstairs (sanctuary ) wasn’t finished. In time they were able to meet upstairs, and the downstairs became Sunday school classrooms. It is now the youth room with new carpet and furnishings, just done this last summer.

“Rev. Dr. Harold Cherry had been our guest speaker on December 28, and had told about his memories of that day 40 years ago. After the time of sharing, Pastor Dick Thorp had prayer with them and asked for some of the youth present to be there in 20-30-40 more years to carry on, because Archie said he’s ‘going up to Heaven’ before another 40 years.” 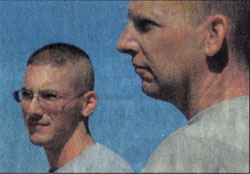