The UB Church in Canada helds its annual national conference the weekend of June 8 in Port Elgin. One highlight was the ordination of Bob Cotie, pastor of Shiloh UB and Livng Hope Christian Centre. The picture above shows Bob and Debbie Cotie kneeling during the ordination, as three conference ministers pray over them (l-r): John Duyck, John Pierce, and Brian Magnus, bishop of the UB Church in Canada.

David and Melissa Kline, headed for Macau next spring, attended the Canadian National Conference. Canada has agreed to pick up 50% of their support. Here they are being prayed over by Canadian brethren. 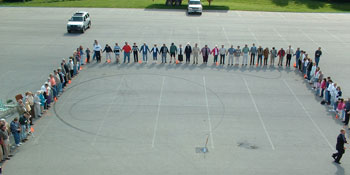 Brent and Loretta Liechty are the parents of twin baby girls. Lauralei Elizabeth and Susanna Elyse Liechty were born June 2. Brent writes, “Unfortunately, they had some lung problems from being early and were transported to Hershey Neo-natal unit. But everything is going well; they are breathing on their own, but still need oxygen.” Brent is Youth Director of Criders UB in Chambersburg, Pa.

Marshalee Brown, a UB from Jamaica, arrived in Ethiopia early in the year to begin serving with SIM International. One June 4, she wrote, “I was told today that I need to leave the country by Saturday. I cannot get a work permit at the moment and we are not sure when I will be able to get one. It might be next week, next month or it might take a couple of months. I do not know and the SIM personnel here do not know as well. This has never happened before.

“There is a project agreement for the Youth Center in Mekelle and the number of people has been approved, which includes me as the English teacher. There have been a lot of changes in the government and in the requirements for work permits over the past few months. I leave for London early Friday morning. Please pray that I will not have to stay in England for very long, that the problems with issuing work permits will be worked out soon.”

“Petie and the kids and I will fly home to the States on June 5. This will be our annual furlough or home assignment trip, where we travel and share in churches about the work of Arise & Shine. We don’t plan this trip each year so that we can have a two-month vacation, although we certainly enjoy seeing our families and friends. We make these trips because today’s missionaries have to spend a lot of energy and time to keep the their income coming in.

“I recently read in our home church denominational Global Ministries Newsletter that in this past year, missions organizations straight across the board have experienced a 15-50 percent decrease in gifts. We are not an exception to this trend. We have been operating on a shoestring budget since the first of the year. This spring the accumulated income of February and March didn’t even cover our expenses for one month.

“We are heading into the summer months with our checking account scrapping the bottom, which makes me feel a little bit uneasy. As you know we are under construction, but have had to once again stop the progress of the construction because the funds have been exhausted. This downturn in general missions giving may only be a reflection of the general insecurity of the population in the States during the time of war. It may be that this second part of the year will record a return to previous giving levels. However, it is more likely that this trend will continue.”

16 May News from Jen Blandin

Jennifer Blandin, a UB missionary in Macau, commented the recent headlines in her latest newsletter.

“The nightly news is full of daily statistics from the SARS outbreak. Yes, Macau is very close to Hong Kong, but yet far enough away to not have a single case of SARS! I know that this unbelievable, but the World Health Organization confirmed it last week. I’m calling it like I see it, a blessing from God. Something that has not been on the nightly news is how it is affecting the people of Hong Kong. I think the initial shock and fear has worn off, but there will possibly be long-lasting affects on people’s trust. People don’t know who to trust anymore. Their government was slow in reacting, their money could not cure them, and the doctors they trusted were the ones getting sick. While I don’t like seeing people get sick or be scared, it is a time when a lot of people in Hong Kong are thinking about who they can trust. A great time to point them to the One they can trust –Jesus!

“Due to this SARS disease and the thought that it is spread by droplets of people’s “water” going through the air, there is now a campaign to stop people from spitting. From little babies to grandparents, Chinese people know how to spit. It could almost be considered a sport. But there is now a fine of $60 if you are caught spitting on the streets. Since the new fine has been put in place, I haven’t heard of anyone getting fined. But I have wondered if I could charge the fine to anyone I have seen spitting!

“The war in Iraq has brought about mixed views. The topic has brought about some lively discussions, but we’ve felt no “backlash” because we are Americans. While people may have differing views of the war, we are friends first!”

Here are a variety of news items sent in April from Hong Kong National Conference.

Myanmar. Planning is underway to raise $50,000 to buy a new Language Center. Carmen Chin will return to Hong Kong in May to prepare for the delivery of her second child.

Thailand. Rev. H. M. Lee has employed another mail preacher to assist the work of the center and the church. A short-term mission trip from Hong Kong to Thailand has been postponed due to the SARS epidemic.

Sri Lanka. Bridget Ho, a member of Hong Kong Conference, is serving with Operation Mobilization in Sri Lanka. She is involved in voluntary work in a children’s centre, in teaching English, and in distributing rice. She is looking for suitable churches for mission work.

16 May News from West Windsor

16 May Updates on New Churches in Michigan