On January 25, Hillsdale UB celebrated its 100th anniversary. State Sen. Cameron Brown delivered the invocation and Bishop Paul Hirschy gave the benediction. Nearly 600 people attended the two morning worship services. The first service concluded with the baptism of 12 people, while the second service ended by taking 37 into membership, which broke a record that had stood for a century.

On January 24, 1904, thirty charter members formed the church. Hillsdale UB connected its Centennial Celebration with the historic first flight of the Wright Brothers and their UB background. The Centennial motto is, “Soaring with Christ, we see the world from a different perspective.” During the first service, Bishop Paul Hirschy was introduced to a man bearing the same name as the Wright brothers’ father, who was a former United Brethren bishop. Milton Wright began visiting Hillsdale UB last fall. Each of those who were baptized or joined the church that day were given one of the new quarters depicting the Wright brothers conquest of the air.

Over the last five years, Hillsdale’s ministry has averaged one conversion per week. Through the first quarter of this year, the average was two per week, partly as a result of the response to the Passion of the Christ film. The church purchased all the tickets for five showings of the film at the local theater. Pastor Les Smith instructed the congregation not to buy the discounted tickets unless they also bought one for an unsaved or unchurched person. All 1,000 tickets were sold, and approximately half of those attending the five showings were not from the church. Each of the four pastors at Hillsdale took a turn at presenting an invitation at the conclusion of one of the showings, and a dozen people responded.

Pastor Smith preached a Lenten series on the Passion from Isaiah 53, the fifth verse of which appears on the screen at the beginning of the film. There was a definite impact on attendance for Easter, when nearly 800 attended the two services, a church record.

13 Apr Update from the Reecks in Honduras

Roger Reeck, a UB endorsed missionary serving in Honduras with Wycliffe, gives an update on their ministry.

“We have been very busy traveling around to villahes setting up our ‘Garifuna Bible Reading in the Schools’ program. We have visited communities and churches seeking volunteers who will go in to each classroom, grades 4-9. We are thrilled with the response of the Garifuna Christian community.

“We have now produced 6000 study booklets for the children. These, along with boxes of Bibles, have now been distributed to 25 Garifuna towns. Some have started the program, but others will begin after Easter. Continue to pray that the doors will remain open and that the volunteers will remain enthusiastic. Most of all, our prayer is that God’s Word will touch the hearts of the Garifuna children.”

Rev. Michael Mudge is planting a church in Cumberland, Md. It is called Bethany House of the Lord. He wrote on April 4, after ten consecutive weeks of Sunday worship, that they were averaging 33 people in attendance. “We are trying right now to solidify our core group, and we have not yet done any outreach. We plan to begin some public outreach in the summer. We had our first convert in February.

“My greatest joy has been in seeing the families that make up our congregation doing daily family devotions together. The nine children are doing great at scripture memorization. We have a growing ministry to the deaf, with five deaf people coming regularly and a deaf instructor standing with me at the pulpit to sign the worship celebration. Please pray for God to strengthen our core group and to draw others in and help us in planning our outreach ministries.”

Luanne Brooks had planned to be back in Haiti by now, but a mass was discovered which required a biopsy. That was done on April 13. Luanne wrote on April 13, “My biopsy results showed that I had a fibroadenoma. What that means is that I’m heading back to Haiti! I met with the doctor today and he just recommended yearly mammogram screenings.

“Pray for our ministry in Haiti as I head back next week. I will drive down to West Palm Beach on Monday morning April 19) and then fly out early Tuesday morning. Pray as I continue my language studies and find my place back in ministry again.”

Steve and Bev Swartz, UB endorsed missionaries with Wycliffe Australia, are currently in transition. They began their work with Bible translation in 1975 and started working in earnest on the Warlpiri translation in 1978. That Bible was joyfully dedicated in 2001 in Alice Springs, Australia. The time has come for a change of pace. Steve will begin a leave of absence from Wycliffe this spring, and will be employed at Yirara College in an administrative position.

Their appreciation goes out to “friends and family who have prayed for and supported us, who have struggled our struggles and dreamed our dreams, who have laughed and wept and rejoiced with us and the Warlpiri people for these last 25 years that we have lived and worked in Australia. We owe each and every one of you more thanks and credit than we can ever give or repay. We know for certain that anything we have accomplished for the Lord here in Australia has been your accomplishment as well, and we praise and thank God for you all.”

Steve and Bev Swartz can be reached at this address: 55 Patterson Crescent, Alice Springs, NT 0870 Australia.

From February 16-19, pastors and delegates from our church planting region in India were able to attend a family conference organized by the UB people. Three guest speakers gave excellent teaching, and 35 delegates were encouraged and refreshed.

Our couple in India were excited about this opportunity because of the increased challenges facing our pastors through persecution from the Hindus and the threat of a new anti-conversion law. The state’s ruling party is threatening to pass a law that would prohibit a person from changing his religion, and would outlaw baptism. This has already been passed in three of the neighboring states.

Despite the difficulties, through the church planting ministry 189 more people have accepted Christ as Savior, and out of these, 124 have taken the significant outward step of baptism. 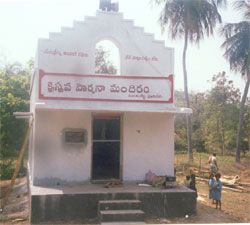 The new Punpeta church in India, built with VBS funds.

The Vacation Bible School Project for 2003 was to help build a church and provide a place for children to worship in the tribal areas of India. Over $8500 was raised through the generous giving of children. Because of this, the following has happened:

The funds have been a big blessing because there was a great need for people to see a church being built in villages that are predominately Hindu. 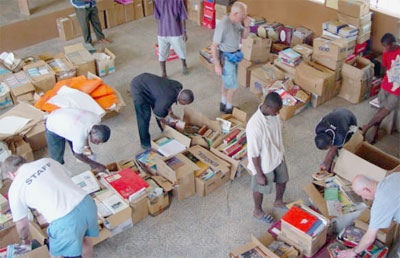 The schools or Sierra Leone were blessed with the arrival of a container which includes a large number of schoolbooks obtained from a school in Michigan. At least five boxes of books were given to each of the three UB secondary schools (high schools). This photo was taken in the Bo Secretariat building.

Ryan Clark is the new pastor at Van Wert UB (Van Wert, Ohio). He will begin in mid-April. Ryan and Becky are coming from Gordon-Conwell Seminary, where he is completing his MDiv degree. They have two children and one on the way.

Dr. J. Edward Roush, former US Congressman, Huntington College trustee, legal counsel for the UB Church, and member at College Park Church in Huntington, passed away on Friday, March 26. The funeral was held on Wednesday, March 31, at College Park church.