31 May Death of June Baker 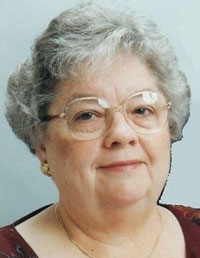 June M. Baker, 85, passed away April 15, 2019, in Chambersburg, Pa. She was the wife of Rev. Paul B. Baker. They were married in 1953 and served 36 years in pastoral ministry in the United Brethren church. For 30 of those years, Paul was senior pastor of King Street UB church in Chambersburg, the denomination’s largest congregation.

June grew up in Chambersburg, taught Sunday school for over 40 years, and was employed for 24 years with F&M Trust Company. She is survived by her husband and their son, Jeffrey.

Condolences can be send to Rev. Paul Baker at this address:

24 May Thomas Evans and the 24th Iowa Infantry

As we enter Memorial Day weekend….The Religious Telescope, our denominational magazine during the 1800s, recorded the obituaries of nearly 900 United Brethren men who died fighting for the Union during the Civil War. They included about 35 UB ministers, and 40 sons of UB ministers. As a denomination, we were fully committed to the Union cause.

On March 11, 1864, Thomas Evans enlisted as a private in the Union army. He was 38 years old, not a young man like so many Civil War soldiers. He left a wife and seven children at home in Newport, Iowa. And he was not, then, a Christian. But he had some kind of United Brethren connection.

Evans was born in Delaware, but made his way west with the growing nation. He and Nancy were married in 1847 in Indiana, but eventually settled in Iowa. Then came war. Thomas said good-bye to his wife and children for the last time, and left home to join the 24th Iowa Infantry, Company D.

Within eight months, Thomas would die of wounds received in the battle of Cedar Creek, the culminating battle of the Shenandoah Valley Campaign of late 1864. It was a costly Union victory, with 644 killed, 3,430 wounded, and nearly 1600 taken prisoner. But it helped seal the fate of the Confederacy.

Evans’ obituary was published in The Religious Telescope, the United Brethren bi-weekly newspaper at the time. Perhaps he was what we called a “Seeker,” a category of membership for persons “giving evidence that they are sincerely seeking the Lord.” Nancy would soon become a United Brethren member, so there was probably a UB church there in Newport, or nearby. The UB presence was fairly thick in that part of Iowa.

If Thomas was, indeed, a Seeker, he had help for that journey while in the army. The Religious Telescope published the obituaries over 90 Iowa men who died serving in uniform. They included several United Brethren ministers, and laypersons from ages 17 to 59. They were spread among 32 infantry regiments and six cavalry regiments. We can assume that, in addition to these 90 fallen soldiers, hundreds of additional United Brethren men from Iowa served in and survived the war.

Six of those fallen men served in the 24th Iowa Infantry alongside Thomas Evans. Two of them were the sons of United Brethren preachers.

Abram Hershey, 59, was the son of Rev. Christian Hershey, who had basically started the UB church in Lisbon, Iowa. The Hersheys were from Lancaster, Pa., the birthplace of United Brethrenism. When Rev. Hershey came to Lisbon in 1847, a year after Iowa achieved statehood, he brought a bunch of relatives with him, including his son Abram and Abram’s large family. Other Pennsylvanians also came, enough that histories refer to the “Pennsylvania Settlement.” The Iowa Conference was organized at Lisbon in 1849, with Christian Hershey as one of the charter members, and Lisbon became perhaps the most prominent church in the conference.

Abram’s three oldest sons—Christian, John, and Henry Harrison—all enlisted in the Union army. Christian and John enlisted together on September 3, 1862, in the 24th Iowa Infantry. Christian was discharged for disability in May 1863—perhaps wounds, but more likely, sickness. But his father, Abram, signed up on March 3, 1864, to take Christian’s place.

Thomas Evans enlisted on March 11, 1864, just eight days after Abram. Though they were in different companies of the 24th—Abram and his sons in Company F, Thomas in Company D—we can assume that they at least got acquainted on their journey to join the regiment. But it’s quite likely that they already knew each other, since they lived just 16 miles apart.

Of the three brothers, John Hershey had the more distinguished military career. By May 1863, he had been promoted to sergeant. Then came 1864, quite an eventful year for him. First, his father joined Company F. Two months later, on April 8, John was severely wounded in the battle of Mansfield, La., a Union defeat (it is also known as the Battle of Sabine Cross Roads). Two months later, on June 13, his father, Abram, died of disease aboard a steamer near New Orleans. John recovered from his wounds, and then was wounded again, this time slightly, on September 19 at the battle of Opequon, also known as the third battle of Winchester, Va.

A month later, on October 19, John was taken prisoner at the battle of Cedar Creek, Va., the same battle in which Thomas Evans was mortally wounded. John, fortunately, was soon paroled in a prisoner exchange and would survive the war.

Another UB from the 24th died at Cedar Creek—George S. Smith, 23, who lived 14 miles from Evans. He was born in Germany, but was now living in Mount Vernon, Iowa, with a wife and three children. He had fought for two years before dying on the battlefield. He joined William O. Huyck, another young soldier from Mount Vernon, with whom he had enlisted in Company F in August 1862. Huyck, 30, a native of Ohio, died of disease on January 5, 1863.

Another UB preacher’s kid in the 24th was William Otterbein Miller, who was obviously named after founding bishop Philip William Otterbein. He was the son of Rev. Martin Miller, a pastor in Iowa Conference who, like the Hersheys, had come from Pennsylvania. Miller was wounded on September 19 at the battle of Opequon, and finally died of his wounds on February 13, 1865.

No doubt various other United Brethren served alongside Thomas Evans in the 24th regiment. Western College, a UB school located 18 miles from the Evans home, contributed a large number of students to the war effort. Then there would have been Christians from like-minded denominations like the Methodist and Evangelical churches. In fact, the 24th was sometimes called the “Methodist” regiment.

Thomas apparently sought God as a soldier. And it was as a soldier that he finally surrendered his life to Christ. It happened one night while he was on picket duty. Perhaps he was alone, but probably not. Was another UB with him when he committed his life to Jesus, between glances at the rebel pickets across the way? How might his decision have been influenced through interactions with Abram and John Hershey, George Smith, and William Otterbein Miller?

We don’t know how or when it happened, but it apparently did.

On October 19, 1864, Thomas Evans was severely wounded at the battle of Cedar Creek. His right forearm was amputated and he was hospitalized in Baltimore. But on November 5, he succumbed to his wounds.

A chaplain was there at his deathbed. According to Evans’ obituary in The Religious Telescope, “He told the chaplain that all he had to regret was that his children had never heard their father pray.”

A one-day UB History Course will be held June 29 in New Carlisle, Ohio (near Dayton).

You can register here.

Laypersons, especially local church leaders (board chairpersons and members, lay delegates, etc.), are encouraged to attend. It’s valuable to have an understanding about United Brethren history.

You will also need copies of three books: “Trials and Triumphs,” and “All for Christ,” volumes 1 and 2.

Complete information can be found here.

16 May Four Regional Meetings are Completed 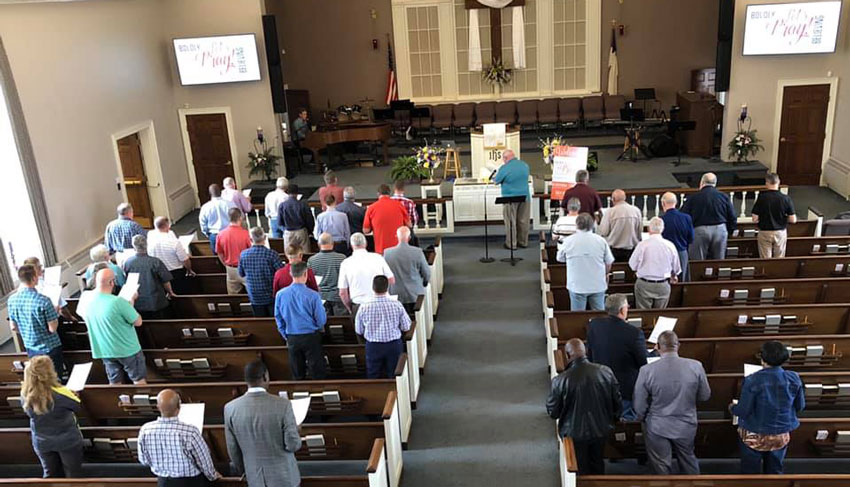 The meeting at Mt. Pleasant UB church in Chambersburg, Pa.

The meeting at Praise Point UB church in Willshire, Ohio. 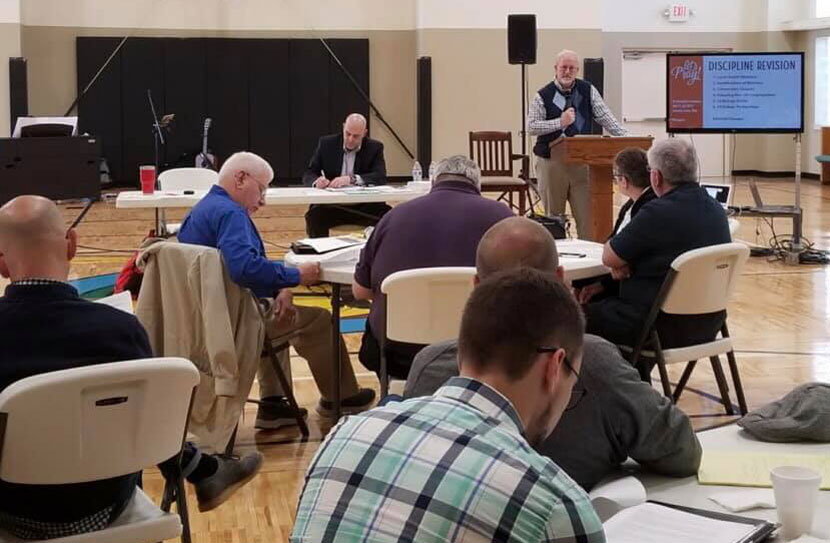 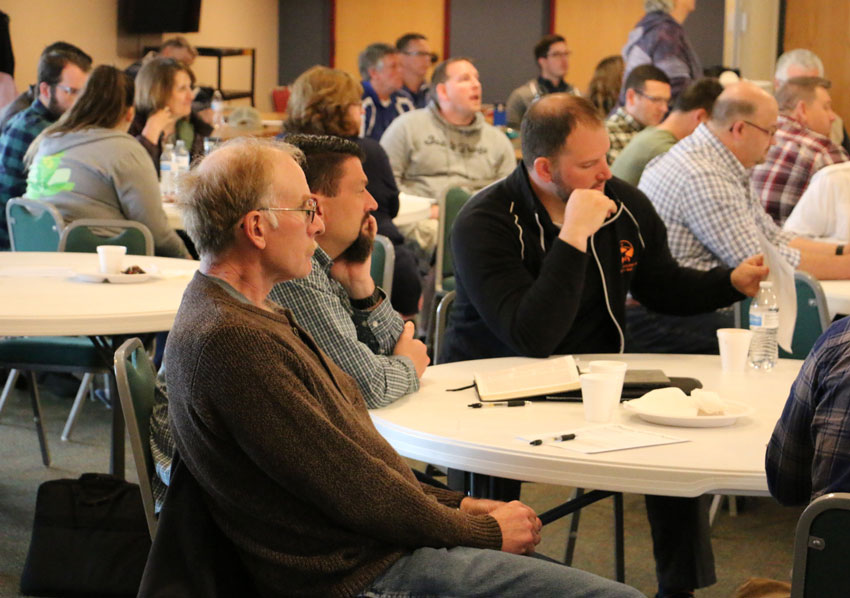 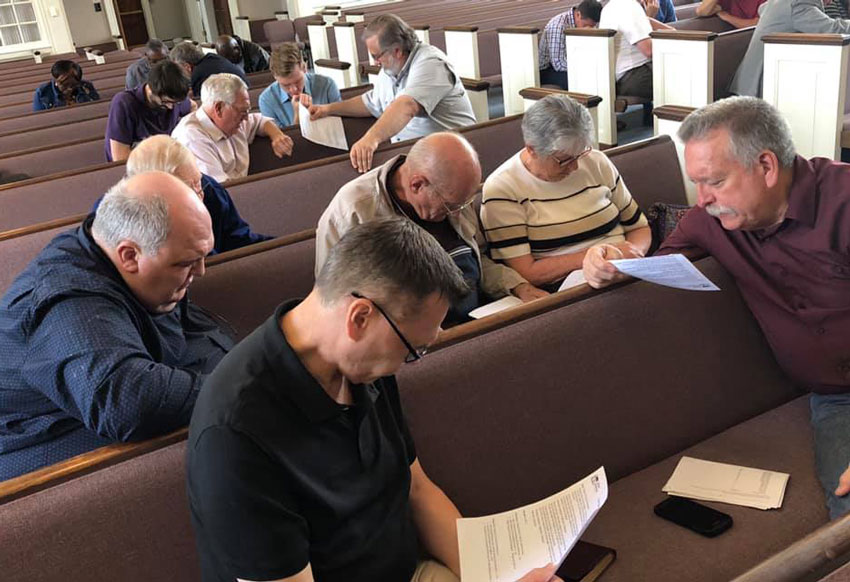 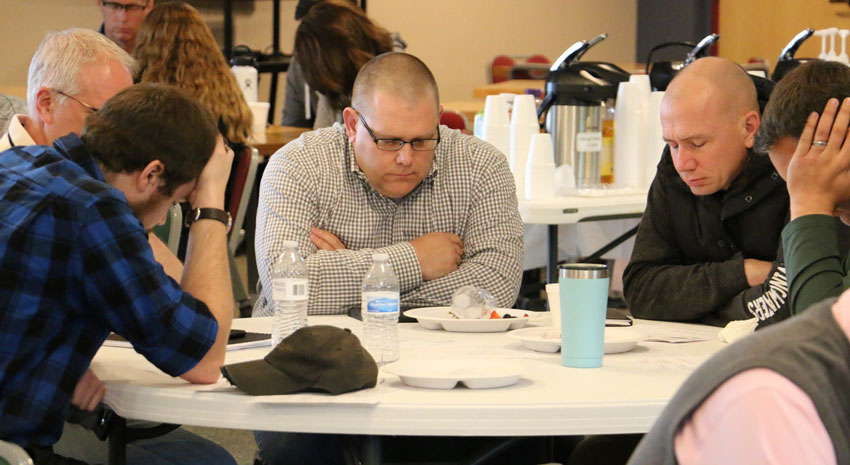 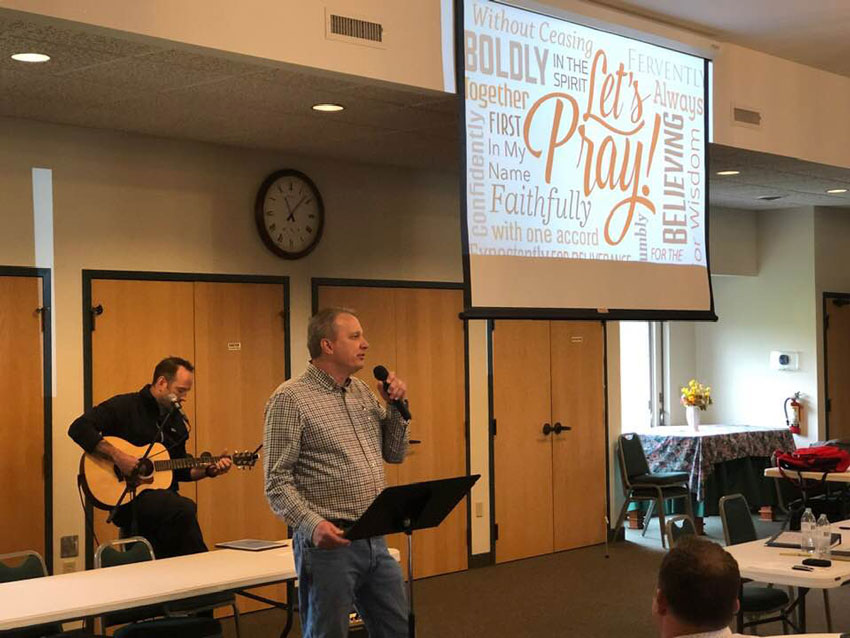 During the past two weeks, four Regional Meetings have been held as a prelude to the US National Conference this summer. Bishop Todd Fetters used the meetings to inform people about what will happen at National Conference and review the proposals for revising the United Brethren Discipline.

Last week, meetings were held in Chambersburg, Pa. (May 6) and Willshire, Ohio (May 8).

This week, over 60 people attended the May 13 meeting at Sunfield UB church in Sunfield, Mich. Two days later, about 20 people attended an online edition, with participants from the East Coast to California.

03 May Proposals for the US National Conference

The Executive Leadership Team met this past Monday and Tuesday, April 29-30, at Huntington University (Huntington, Ind.). Among other things, they reviewed the proposals which will go before the US National Conference during the business session on July 18, 2019.

Proposals
There are just six proposals for revising the Discipline, along with five editorial changes. Bishop Todd Fetters will go over these during the regional meetings, which start this coming Monday (May 6) at Mt. Pleasant UB church in Chambersburg, Pa.

The most significant proposal regards beverage alcohol. In 1849, we began requiring all UB members to totally abstain from drinking alcohol. In 2005, we removed that restriction for laypersons, but kept it for United Brethren ministers. A proposal to remove the restriction for ministers, and only urge abstention rather than require it–same as with laypersons–went before the 2015 US National Conference, but was tabled. The same basic proposal will be considered this year.

Two PDF documents can be downloaded on the UB website. One contains all of the Discipline revision proposals. The other summarizes UB history as it relates to our stands regarding alcohol.

The National Conference business meeting will be held Thursday, July 18. UB ministers and lay delegates are strongly encouraged to attend a regional meeting. The dates and locations are:

At the regional meetings, Bishop Fetters will invite feedback about all of the proposals, and tweaks may be made. A final version of the proposals will be published in June.

Please register for a regional meeting, if you plan to attend.

This was the last meeting for this version of the Executive Leadership Team. For eight of the 12 members, their term ends this summer. Half of the eight elected members are chosen by the US National Conference every two years. The bishop also appoints four members every two years. The four members whose terms don’t end until 2021 are Dennis Sites, Tyler Bates, Matt McConnell, and Gary Dilley. The UB website shows the current ELT members and when their terms end. 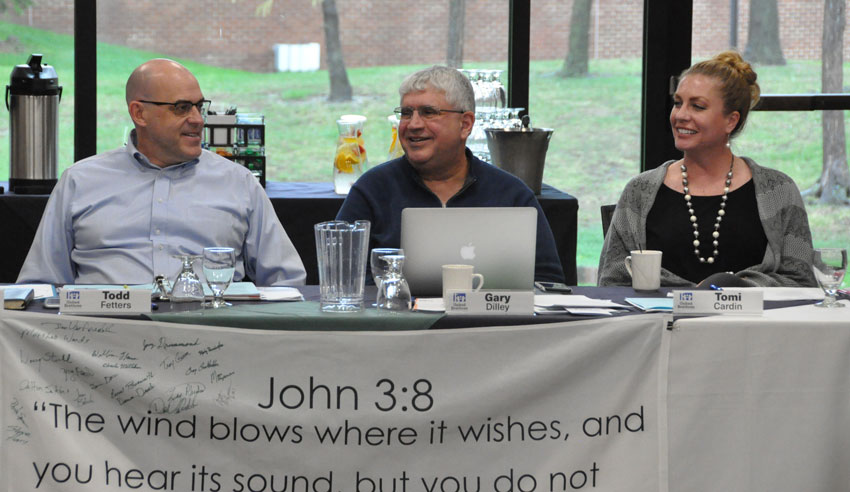 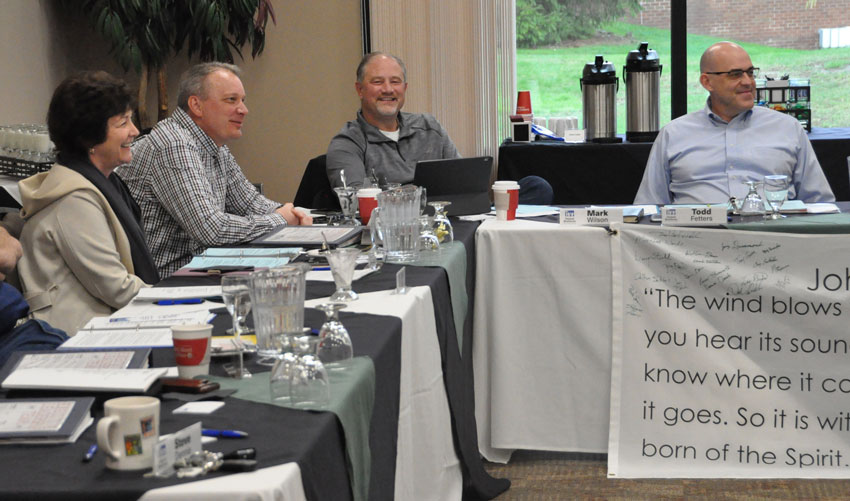 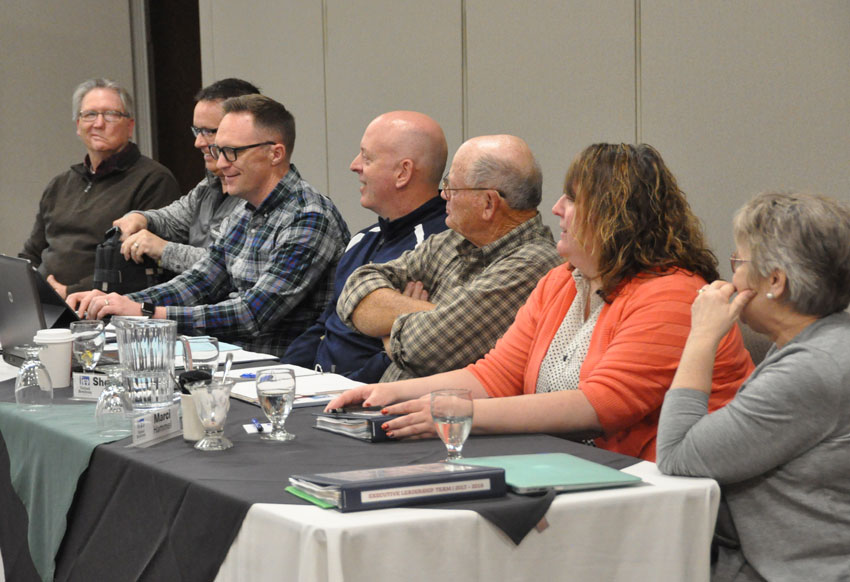 02 May Regional Meetings Start Next Monday, May 6

Three regional meetings will be held in May 2019 as a prelude to the US National Conference. In this video, Bishop Todd Fetters talks about these meetings and how people can pray for them. “Let’s Pray” is the theme for the conference.

You can register for any of these meetings here. 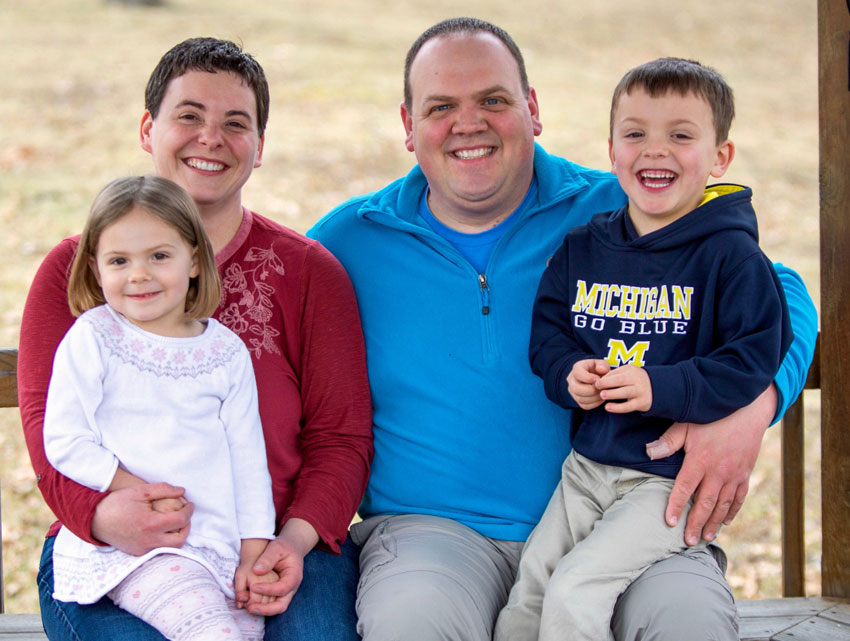 Beau and Melinda Graf with children Oliver and Adeline.

Beau Graf began his new job this week as executive director of Camp Living Waters in Luther, Mich. Beau has served many years in Christian camping and is very excited to lead the staff and ministry at CLW.

Beau and his wife, Melinda, have two children: Oliver (5) and Adeline (3).

The Grafs are looking forward to riding their mountain bikes over the many miles of trails that surround CLW and enjoying the legendary tranquility and big night skies that characterize Camp Living Waters. Also, they are very excited to be about the work of serving and loving others so that they may know and grow in Jesus Christ.