When the United Brethren denomination officially organized in 1800, we had a single conference, with churches located mostly in Pennsylvania, the Virginias, and Maryland. As the country moved west, UB people moved with it. First stop: Ohio. In 1810, Christian Newcomer (not yet a bishop) met with 15 ministers near Dayton, Ohio, and organized what became known as the Miami Conference (after the Miami Valley of western Ohio).

Delegates from the two conferences finally met together in 1815. They met at a schoolhouse in Mount Pleasant, Pa., which was kind of halfway between Dayton and Lancaster. The Ohio folks had farther to travel, but didn’t need to cross the Allegheny Mountains like the Pennsylvania folks.

The 1815 General Conference was significant in that they adopted a Confession of Faith and Discipline. However, they profoundly felt the absence of the founders. Martin Boehm and George Geeting had died in 1812, and William Otterbein in 1813. These were men whose word was law. As it was said, somebody else could hold the office of bishop, but nobody could replace the man.

Christian Newcomer presided along with Andrew Zeller, an Ohio minister. Things didn’t start well. On the opening day, Newcomer wrote, “Instead of love and unanimity, the spirit of hatred and discord seemed to prevail.”

It got slightly better the next day. Newcomer wrote, “The heat had considerably abated and the business before us was conducted better than I expected.” And yet, “The sky was not exactly clear.” Things would go smoothly for a bit, and suddenly ministers would be throwing around sharp words.

“This could not last long,” wrote Newcomer. “The darkening clouds which hung over this conference must be cleared away.”

So, they halted everything and held “such a prayer meeting your humble servant never witnessed before nor since. Brethren with streaming eyes embraced and thanked God.”

Some historians say Christian Newcomer and Andrew Zeller were elected bishops in 1815. The reality seems to be that they weren’t elected until 1817. They wanted to hold General Conference every four years, but Newcomer’s three-year term would end in 1817.

So, to get the schedules in sync, they held a second General Conference just two years later, in 1817. During that meeting, Newcomer and Zeller were elected as bishops. From then on, up until 2005, General Conference was held every four years. 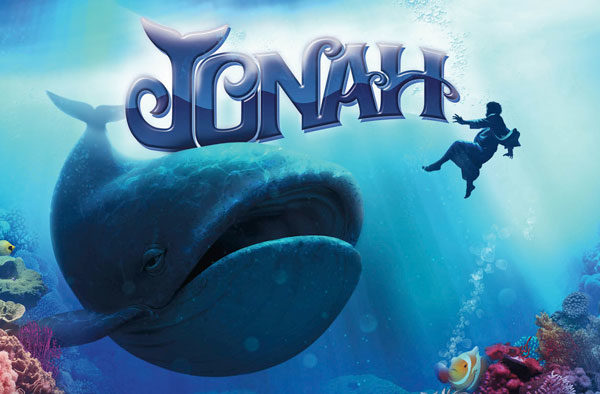 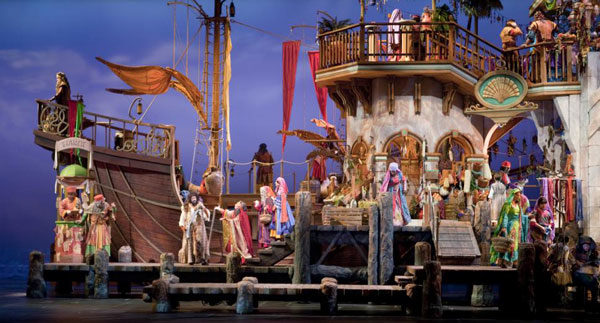 The National Office has purchased a block of tickets for the Saturday afternoon, July 15, performance of “Jonah” at the Sight and Sound Theatre in Lancaster, Pa. The theater is located nine miles from the conference center.

The conference will conclude around 11:00 Saturday morning. The show starts at 3:00 pm.

Make plans to extend your visit to Lancaster by joining us for this fantastic production! All tickets are on a first-come, first-paid, first-serve basis. Adult tickets are $75 and children (ages 3-12) are $35.

On June 3, 1991, Rev. Marvin D. Price was doing one of the things he enjoyed most: fishing. He was by himself out in a boat on a lake where he had fished many times before, a lake near Warsaw, Ind. But tragedy struck this day. Pastor Price fell out of the boat and, unable to swim, he drowned. Several people watching from the shore were unable to help him in time. Some think he may have had a heart attack.

Marvin Price was known much more as a fisher of men than as a fisher of fish. While he took up fishing in the 1980s, he had developed a passion for soul-winning decades before. It was not a hobby, or something to be done occasionally or when the opportunity arose. Rather, for Marvin Price, leading people to Christ was a consuming priority.

Marvin grew up in the home of Rev. Homer and Amanda Price, who served 16 United Brethren pastorates, the longest lasting just four years. Of those, 11 were church plants. He recalled, “My father’s zealous use of spiritual gifts enabled him to establish congregations quickly where there were none. Personal evangelism and crusade evangelism were both major parts of his ministry.”

When Marvin was in second grade, the family pulled a mobile home from church to church conducting evangelistic and revival meetings. Marvin attended 17 different schools that year. “I never fought church attendance,” he wrote in the November 1993 UB newsletter. “It was central to my life.”

While still a teenager, Marvin was assisting his father on the platform and in other areas of leadership. He began preaching at age 16. While a sophomore at Huntington College, he returned to Hillsdale, Mich., to preach a crusade and 35 people accepted Christ.

Marvin pastored two different churches while attending Huntington College. There, he met Grace Ann Graham, who grew up in the Colwood UB church in Caro, Mich. They were married in 1955. Their first UB pastorate was in Topeka, Kansas. After three years there, they were assigned to the Orange Avenue congregation in San Diego, Calif., where they enjoyed a very fruitful six-year ministry.

That was followed by 14 years of exciting growth at First UB in Lake Havasu City, Ariz. During that time, he reported 1745 people who came to Christ. Many people from that church went into fulltime ministry—the pastorate, missions, parachurch organizations, Huntington College, and other areas. Marvin’s sister, Ruth Ann Price, attended First UB while teaching school in Lake Havasu City. She left in 1969 to begin a career as a Wycliffe missionary. Marvin’s oldest daughter, Debbie Price Osberg, would eventually become a missionary in Honduras.

In 1981, the Prices began an eight-and-a-half year ministry at the Morning Star church in Kokomo, Ind. After that, the Prices moved to Spencerville, Ohio, to pastor the Monticello UB church. They were there just 18 months when the fishing accident occurred—but during that time, at least 41 people accepted Christ. During Marvin’s last service at Monticello, a young man was commissioned to ministry and received his local conference license.

Marvin wrote in 1993, “I have understood my call to be a divine one, a distinct honor and privilege….I remain in awe of the high and holy calling of having been set apart by my heavenly Father as one of His under-shepherds.”

02 Jun On This Day in UB History: June 2 (Olin Alwood and Harold Mason) 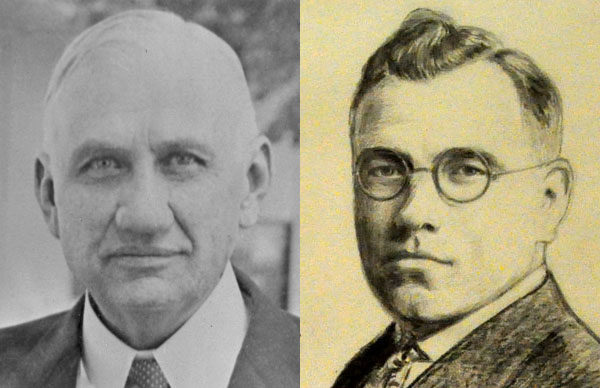 Two bishops passed away on June 2–Olin Alwood in 1945, and Harold Mason in 1964. Both completed their careers outside of the United Brethren Church.

Olin Alwood, born in 1870, attended Hartsville College, a United Brethren school in southern Indiana, and dedicated his life to Christ there in 1889. After teaching school for three years in Nebraska, he became a licensed United Brethren minister and was assigned to the Sugar Grove circuit near Camden, Mich. He went on to serve several other circuits in Ohio and Michigan, and by 1903 had become the presiding elder in North Ohio Conference.

At the time, we had four bishops, three of whom retired in 1905. Alwood, 34, was among the new bishops elected that year. After 16 years as bishop, serving a different district every four years, he became editor of the denominational paper, The Christian Conservator. He apparently found that job frustrating. He stepped down from that role in 1925 and said no to being re-elected as bishop.

In 1927, Alwood transferred into the “other” United Brethren Church. He pastored several churches with them until passing away suddenly in 1945.

Harold Mason graduated from Huntington College in 1907 (called Central College back then) and was assigned to a church circuit in Hillsdale County, Mich. It went badly. After a year, the boy preacher left the ministry for a few years. But he regained a sense of calling to the ministry and plunged back in. The result: eight very successful years at two churches–in Blissfield, Mich., and Montpelier, Ohio.

That success got him elected bishop in 1921. He served four years, and that was apparently enough. The rest of his life was devoted mostly to higher education–four years at Adrian College as a professor and academic dean, three years as superintendent of schools in Blissfield, seven years as as president of Huntington College (1932-1939), Professor of Christian Education at Northern Baptist Theological Seminary, and from 1948-1961, chairman of the Department of Christian Education at Asbury Theological Seminary. He passed away on June 2, 1964. 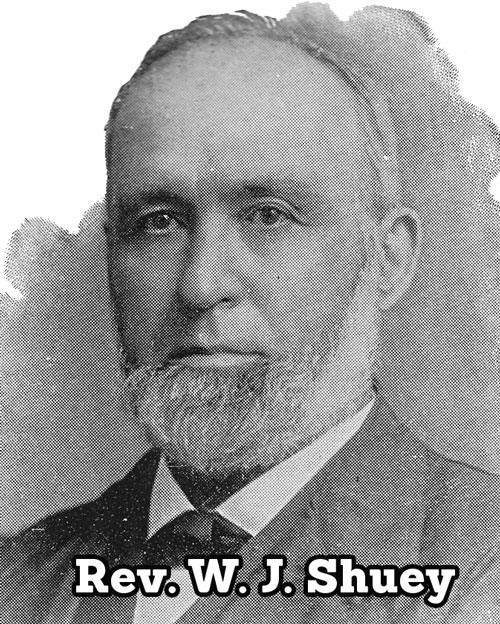 On June 1, 1854, the newly-created United Brethren mission board–the Home, Frontier, and Foreign Missionary Society–met in Westerville, Ohio. Their first action was a big one: “Resolved, That we send one or more missionaries to Africa as soon as practicable.”

They appointed Rev. W. J. Shuey, pastor of a UB church in Cincinnati, as the first missionary to Africa. As a minister in Scioto Conference (southern Ohio), Shuey had been beating the drum for mission work for some time. Scioto had formed its own Home Missionary Society on May 8, 1838, to take the Gospel to “destitute” parts of the conference. But they were also thinking about countries beyond North America. Other conferences formed similar groups.

Back then, the American frontier continually pushed westward, and there was a lot of unreached territory. So when folks raised the idea of foreign missions, people argued that we had more than enough opportunities at home. But other denominations had launched mission work in other countries, and we felt some peer pressure. Maybe, we thought, the United Brethren Church should be looking overseas, too–Africa, China, Europe, and elsewhere.

In 1841, General Conference created a denominational Missionary Society to take the Gospel not only to the American frontier, but to “the heathens in foreign lands.” Persons were appointed to a mission board, but their purpose must have been too vague, because after four years, they had done nothing. The 1845 General Conference appointed another board, but as historian William McKee wrote, “It did nothing, it undertook nothing.” Likewise in 1849.

Finally, in 1853, they got serious. General Conference not only appointed a mission board, but also adopted a constitution, elected a board, and chose officers with specific duties.

Where should they go first? Everyone agreed they should go where the need was greatest. India and China were among the countries mentioned. But they settled on Africa, and specifically Sierra Leone. That fall, Shuey and two other men set sail for Sierra Leone to spy out the land.

They found opportunities for ministry in the city of Freetown, where other groups were also ministering, but that didn’t appeal to them. McKee wrote, “They were unwilling to build on another man’s foundation. Hence, they determined to go out into some darker place and hold forth the lamp of life.” So they headed to the southern part of the country and found locations where nobody else was spreading the Gospel.