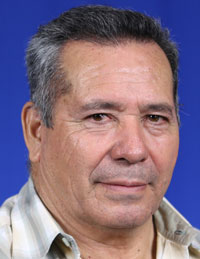 Rev. Gonzalo Alas (right) is the new superintendent of Honduras Conference. He was elected on January 21 during the conference’s annual meeting.

We now have over 115 United Brethren churches in Honduras, mostly in the northern part of the country around San Pedro Sula and La Ceiba (the nation’s second, and third-largest cities). La Ceiba has been the conference headquarters throughout its history.

In 2007, Honduras sent Rev. Alas to start a church planting movement in El Salvador. He had previously started churches in the Copán region of Honduras, where previously there were no UB churches. When he left El Copán to go to El Salvador, 13 established churches and five church plants were functioning.

He takes the place of Juanita Chavez (right), who had served two terms as superintendent, beginning in 2009. Under her leadership, Honduras Conference was instrumental in establishing a church-based leadership training program called ETBIL (Educación Teológica Basada en la Iglesia Local). It has become a model for all of our Central American churches. The conference also approved Milton and Erika Pacheco as their missionaries to Thailand.

You can pray for: