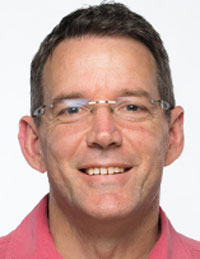 UB endorsed missionary Dave Datema (right) transitioned out of his role as one of three General Directors for Frontier Ventures, effective January 1. He will remain with Frontier Ventures in Pasadena, Calif., and with the US Center for World Mission, but will change roles. Here is his explanation.

“There are several reasons why I think it is time for me to step down from the Office of the General Director. The first reason is that I never planned on being GD for a long time. Back in 2009 when Dr. Ralph Winter asked me about taking the role, I saw that his health was rapidly declining and that the organization needed somebody to take the reins. I did so thinking that my role would be transitional, not knowing how long that transition might be. Now, seven and a half years later, it seems that I have been in this role much longer than any transition might necessitate. It was never my intention to be a lifelong General Director.

“The second reason is that I have increasingly recognized that my life-giving interests were more in the area of missiology than organizational development. I didn’t know in 2009 that so much of this role would cater to the latter not the former. Over the years, I have had many experiences, good and bad, that tested my mettle as an organizational leader. I’ve come to realize that my best contribution to Frontier Ventures is not the same as what some long for in an organizational leader.

“The third reason is that spending so much time on the organizational side has depleted my energy reserves. My zeal for it has slowly eroded. Years of living in a world of planning, org chart shuffling, dealing with personnel issues, real estate management and endless policies and procedures have taken their toll on my general well-being. As a wise man once said, ‘Uneasy lies the head that wears a crown.’

“I now look forward to my new assignment and future. First, I hope to get our campus collaboration onto firm footing for a new season of ministry together. Second, I am looking forward to diving into a full-time ThM Program at Fuller in June, possibly leading to PhD work. Ironically, pursuing doctoral-level work was one of the main reasons we came here 17 years ago. Yet the road we travel rarely goes in a straight line. I’m trusting that God has been in the twists and turns and that being on this road again is part of his plan for me. Someone once said, ‘There is no knowing. But walking makes the road.’ It is in that spirit that I move forward, still part of this community, but in a different role. I covet your prayers.”