05 May July 2016: Milton and Erika Pacheco Coming to the States 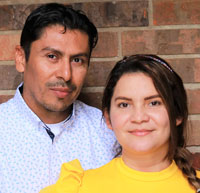 Honduras Conference, with 115 churches, was instrumental in forming our national conference in Nicaragua and in the development of a mission district in El Salvador. However, they have never sent missionaries to another continent – until now.

Milton and Erika Pacheco (right) are being sent to Chiang Rai, Thailand. There, they will join a multinational team of United Brethren missionaries from Hong Kong and the United States. Over the past year and a half, the Pachecos have been studying English while completing missions studies online. Most recently, they have been raising support among the Honduran churches, finishing up Milton’s work with Habitat for Humanity, and selling their home.

Global Ministries hopes to bring the Pachecos to the United States by early July to begin three to four months of raising additional support to complement what they have raised in their homeland.

During their time in the United States, Global Ministries staff will travel with the Pachecos to meet those interested in becoming supporters. A number of churches and individuals have already indicated their interest in supporting this couple. If you or your church would like to know more about supporting them or arrange for a visit, contact us at info@ubglobal.org.