Pathway UB church is hosting a special seminar on same-sex attraction and homosexuality. We would love to have you join us.

Many of us are not prepared to deal with people facing same sex attraction. The church’s approach has too often been “just say no,” and that is not good enough anymore. This subject is growing in importance to the younger people in our churches, and they are willing to walk away from Christianity or the church over this issue.

How can your church become a safe place for all people? How can we become the first place hurting people run to instead of the last? Is it possible to disagree but still love powerfully?

Our speaker, Beth Pictor, holds a Masters in Mental Health Counseling. She will provide an eye-opening and engaging look at how we can better understand same-sex attraction and homosexuality, and will provide opportunity for your leaders to wrestle with these questions. Beth co-led a seminar on this subject at the United Brethren National Conference in July 2015.

09 Feb A Better Way to be Evangelical

Anthony Blair (right), a UB ordained minister and president of Evangelical Seminary in Myerstown, Pa., has a major article on the Christianity Today website titled, “A Better Way to be Evangelical.” It’s been getting some good attention. Take a look. 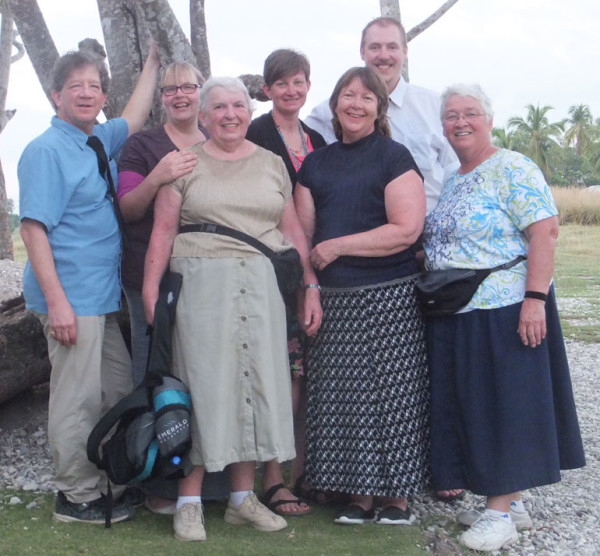 The Canadian team standing by the same tree outside the Chevalier church–the same tree where the first Canadian team, in 2002, also had a photo taken. Joan Sider, a regular visitor to Haiti, is on the far right. 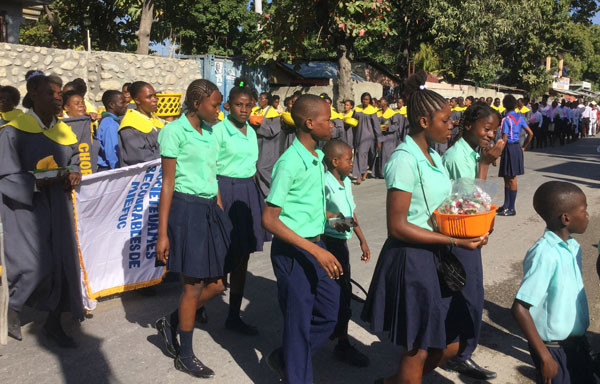 It was quite a celebration as the congregation of the Archaie church marched to their new church building on January 31. 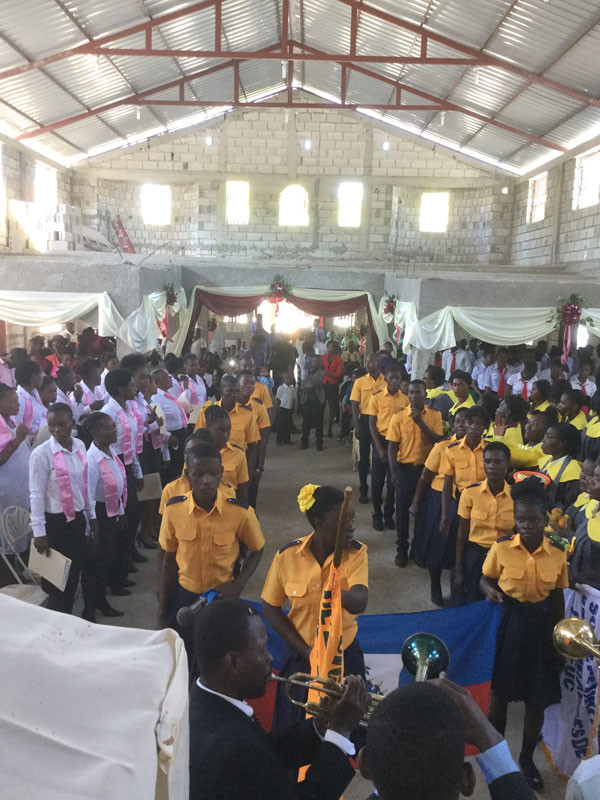 Persons from the Archaie congregation made the move into their new building on January 31.

A team from the UB churches in Canada has been in Haiti since the end of January. They have been involved in a variety of ministries, including quilting classes, eye clinics, construction, and children’s ministry. The Canadian churches have sent teams to Haiti every year since 2002.

On January 31, they were in Archaie for the opening service of their new church. The people and guest choir members marched from the old church to the new church, accompanied by a marching band. It was very celebratory. King Street UB church in Chambersburg, Pa., was instrumental in seeing this accomplished.

They distributed dozens of eyeglasses in several locations after doing vision tests, which typically took 20-25 minutes. Joan Sider wrote, “There was one particular man who was thrilled at being able to see so clearly. His face just lit up.”

They went into a school to teach girls who were having their menstrual cycle, and gave out 54 “Day for Girls” kits. Joan wrote, “The girls seemed very interested and appreciative of this gift. It was fun watching them learn how to use each piece of the kit.” Ladies from the UB church in Kitchener, Ontario, made these kits.

At Cayes, they joined a bucket brigade to pass stone for the floor of the new sanctuary.

On February 3, Joan Sider was in a motorcycle mishap while riding with a pastor to the Archambault church, which otherwise required a 15-20 minute walk over rough terrain. She tumbled off the bike, the pastor landed on her leg, and the motorcycle landed atop him. Joan was shaken up and sore, but not badly hurt. A doctor and nurse were handy, so she was well cared for.

February 8 found them in Grande Saline for a full, productive day. They produced four quilts; in a drawing, two men and two women “won” quilts. The Children’s Ministry attracted about 50 children, who were very attentive despite many distractions. About 43 kits were given out in the Day for Girls presentation. The eye clinic gave out 35 pairs of glasses. They gave out ten baby bonnets knitted by a lady from the New Dundee church in Ontario.

They also held the first medical clinic of the trip, working with Haitian doctor Robinson Germain (right), who has ministered alongside them on previous trips. They saw 44 patients, mostly with high blood pressure and women’s issues. There were some issues with malaria, but improved water purification has greatly improved the situation.

The team will return to Canada on Thursday, February 11. 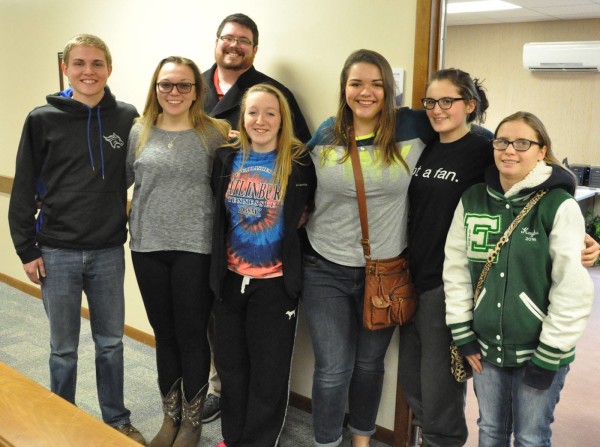 Pastor Adam Will (back) with six teens interested in attending Huntington University.

Adam Will, pastor of Mt. Hermon UB church (Pomeroy, Ohio), brought a group of teens to Huntington University on Friday, February 5. They stayed overnight in the dorms and learned about HU’s offerings in the areas that interested them, which included Business, Education, and Nursing.

Alice Rose Blodgett (right), 94, died peacefully on Thursday, February 4, 2016 in Charlotte, Mich. She served as a missionary in Sierra Leone for 12 years, working at Mattru Hospital as a nurse.

Alice was born in 1921 near Charlotte, the youngest of six children in a farming family. She became a Christian at age 13.

Alice graduated from nursing school in 1947, and worked two years at a hospital in Kalamazoo, Mich. She then felt God calling her to consider the urgent need for a nurse in Sierra Leone. She would serve 12 years at Mattru Hospital. During one furlough, in 1961, she earned a degree in Missionary Nursing from Fort Wayne Bible College. After leaving missionary service, she worked at Fort Wayne Bible College for six years. She then returned to Charlotte, working at Hayes Green Beach Hospital until retiring in 1986.

Alice was a very faithful member of what is now Crossroads United Brethren Church in Charlotte. 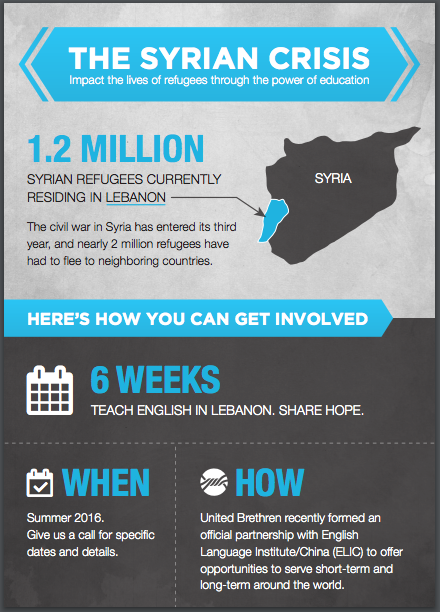 Does the thought of working with Syrian refugees interest you or someone you know? ELIC, our partner in the Middle East and Asia, has a few spots left on their teams going to Lebanon this July. We are looking to fill those spots with United Brethren people. Help share an opportunity to impact the lives of refugees through the power of education! Contact the Global Ministries office if you’re interested. 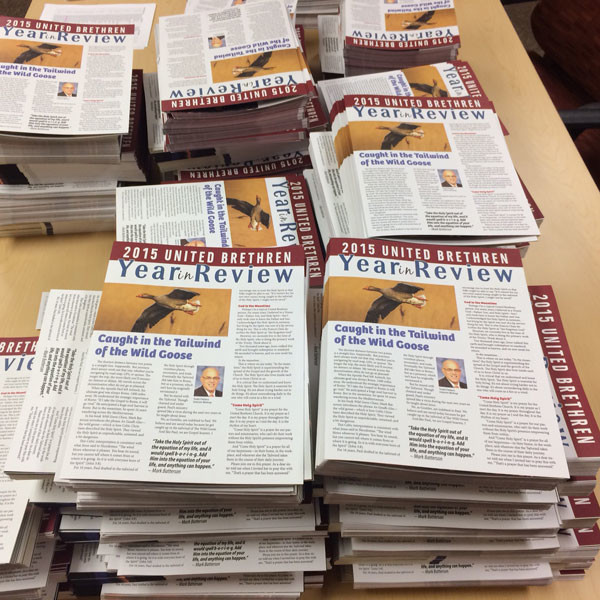 The 2015 UB Year in Review is on its way to United Brethren churches. This eight-page publication begins with an article by Bishop Todd Fetters on the work of the Holy Spirit. That is followed by numerous tidbits from 2015–from churches, our mission work, National Conference, Huntington University, and other aspects of our worldwide ministry. Very informative.

We send a small quantity to each church, based on their attendance size. If you need more, email Cathy Reich at the National Office, or call her at 1-888-622-3019. 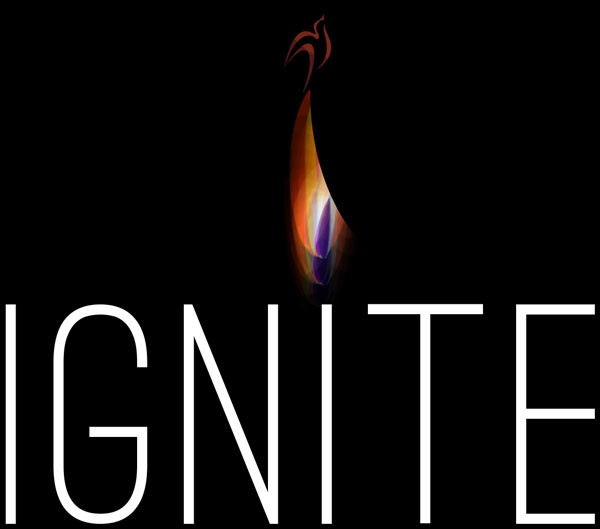 Ignite is a one-day get-away sponsored by Global Ministries. Through plenary sessions and workshops, you’ll grow in your knowledge and application of God’s mission.

You can register in two ways:

For the last ten years, John Bailey has served as a mission mobilizer in two large congregations in Alabama. In this capacity, he has overseen the distribution of millions of dollars given to missions and has facilitated hundreds of mission trips. John is the author of Journey to a Better Way: a Wesleyan Perspective on Doing Mission Better.

For more information and to register online, go to the Ignite page at UBGlobal.org.

A training event for church treasurers will be held 9am – noon Saturday, February 20, 2016, at Rhodes Grove Camp and Conference Center (Chambersburg, Pa.). The cost is $15 for the first person, and $10 for each additional attendee.

Keith and Joy Sider from Sider Agency will be presenting on “Can We Lessen the Tax Burden for your Pastor through Health Insurance.”  Lunch will follow the presentations.

You can use this PDF form to register.