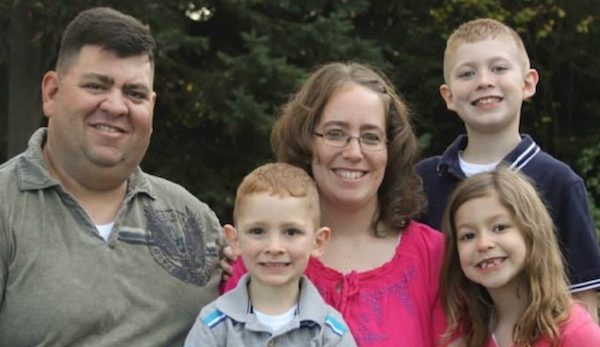 Matt and Jodi Coppess and children.

For the second year, Bishop Phil Whipple created an NCAA bracket on ESPN and invited UB ministers, missionaries, and national office staff to participate. A total of 73 persons filled out brackets. Of those, 44 picked Kentucky to win, 11 picked Wisconsin, and 7 picked Duke. Six persons got the Final Four right, but none of them picked a Wisconsin vs. Duke final, and none of them picked Duke to win it all.

Bishop emeritus Paul Hirschy was solidly in the lead going into the Final Four. However, both of his teams (Kentucky and Michigan State) lost on Saturday, so Paul dropped out of contention.

The winner was a new guy: Matt Coppess. In October 2014, Matt became Pastor of Family Ministries at Heart O the Lakes UB church in Brooklyn, Mich. He finished with 1400 points, 30 points above second-place finisher James Hippensteel, Pastor of Congregational Care at The Well in Huntington, Ind.

Congratulations, Matt! And welcome to the United Brethren family!

Matt is an interesting guy. He grew up in Lansing, Mich., and for a good part of his childhood attended the UB church in Sunfield, Mich. In Lansing, he was part of Youth for Christ groups directed by another UB, Trent Bushnell.

Matt always wanted to become an officer in the military, and to play football at one of the military academies. His good grades and gridiron skills provided two choices: West Point, or the Air Force Academy. He says he chose West Point because his hero, George Patton, wasn’t in the Air Force.

Matt played offensive tackle for three years at West Point. He spent one summer serving at Fort Benning, in Georgia, as a drill sergeant.

Then, in a wrestling class, Matt injured his shoulder. Badly. He returned to Lansing to spend a year on medical leave, trying to rehab the shoulder, and then went back to West Point. Matt knew his shoulder was still messed up, but he tried to fake it. However, doctors saw through it, and said his shoulder wasn’t good enough for military life.

So, back to Michigan. He finished his studies at Michigan State, and embarked on 20 years with Youth for Christ. He started with ten years in Lansing, where he developed student leader curriculum and supervised both paid staff and volunteers. In 1999, he married Jodi Traynor, a 1996 Huntington University graduate with a degree in youth ministry. She served on staff with Lansing YFC for ten years, 1995-2005.

In 2005, after the birth of their first child, Jake, the Coppess family moved to Saginaw, where Matt served as executive director for Great Lakes Bay YFC. Cristin and Zach joined the family in 2006 and 2009.

After nine years in Saginaw, Matt took a YFC position in Tuscaloosa, Ala. But Matt grew weary of fundraising. After a year, he learned about a staff position open at Heart O the Lakes. He was familiar with the pastor, Kevin Cherry, who had previously pastored the Sunfield church. He applied…and there they are.