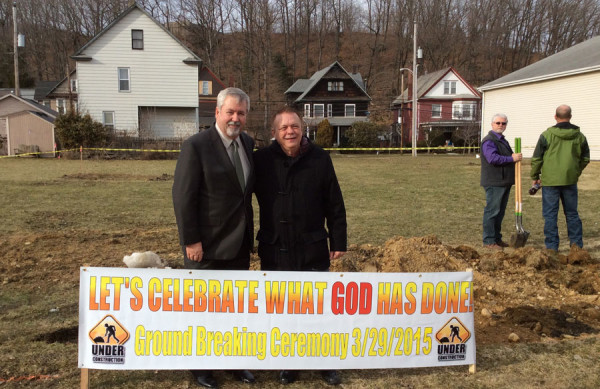 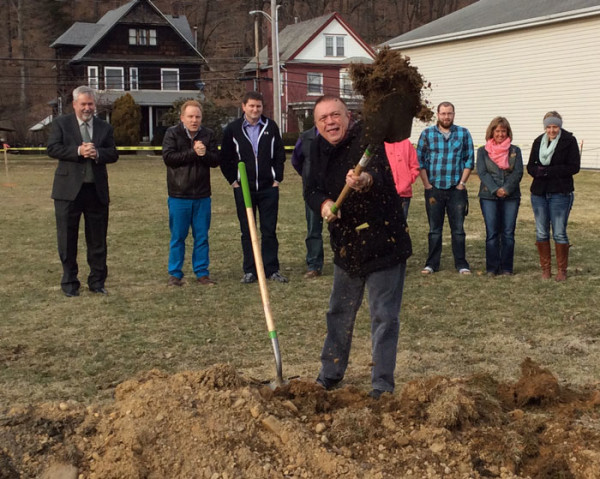 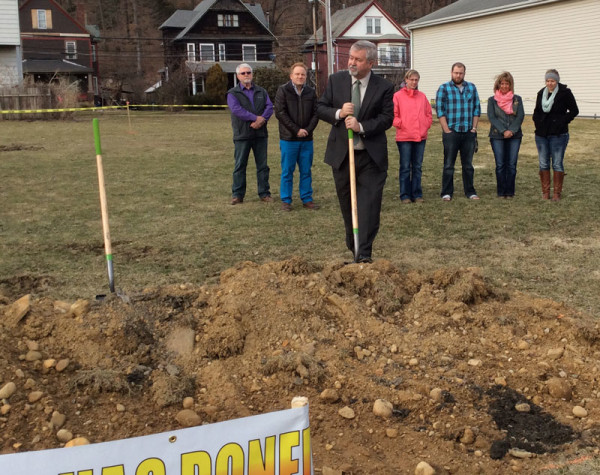 “We are about to begin an expansion project that will increase the size of our facilities by approximately 17,000 square feet. The new addition will connect both of our existing buildings, which will allow for easier access to our facilities. The new area will include much-needed classroom space for adults and youth, as well as a large multipurpose room that can accommodate 200 people.”

Rev. Gary Small has been pastor of Atlantic Avenue since 1991. During that time, attendance has grown from the 100s to nearly 600.

Bishop Phil Whipple was on hand for the groundbreaking. 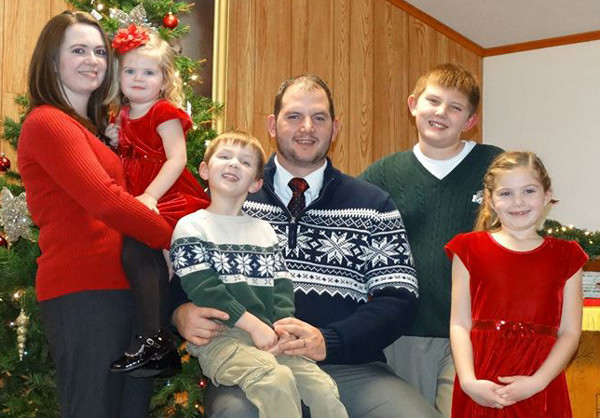 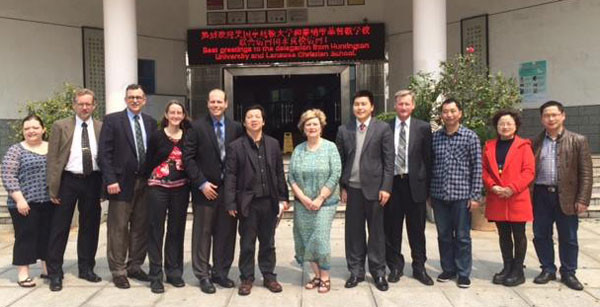 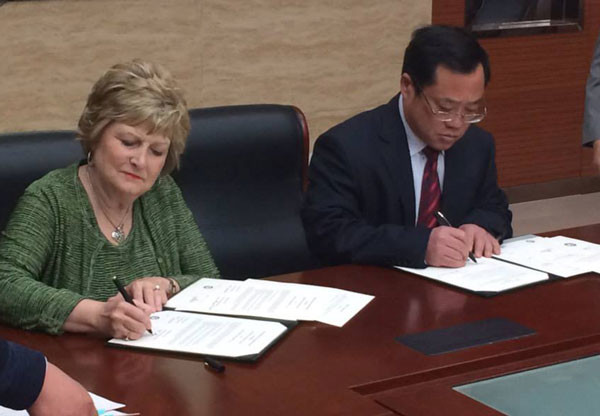 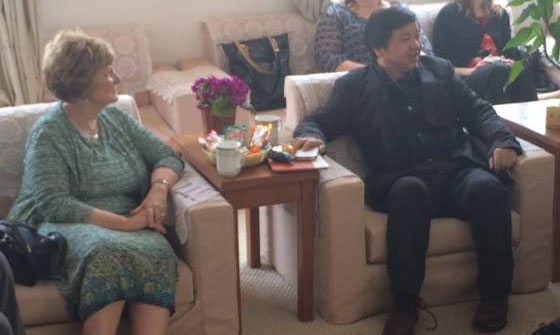 Administrators from Huntington University and from Lenawee Christian School in Adrian, Mich., are currently in China. They are spending ten days exploring partnerships with Chinese institutions. 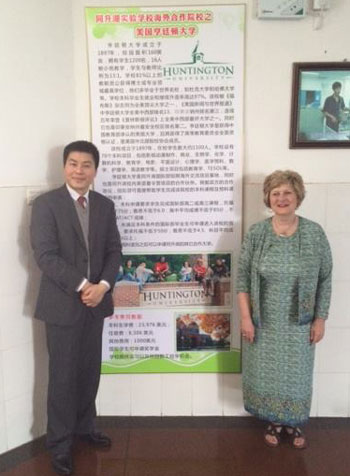 This is the third trip to China that Huntington University administrators have made within a year to pursue partnerships. Huntington University has a seven-year history with China, having hosted summer English camps there since 2007. Those camps have expanded significantly with last summer’s programs involving 180 Chinese students, 80 Chinese teachers, 32 U.S. team members, and six weeks of camps in three locations.

In addition, last fall, five HU alumni established an office at China Hong Kong English School and are teaching English classes there. In fall 2014, 10 percent of the international students enrolled at HU were from China. 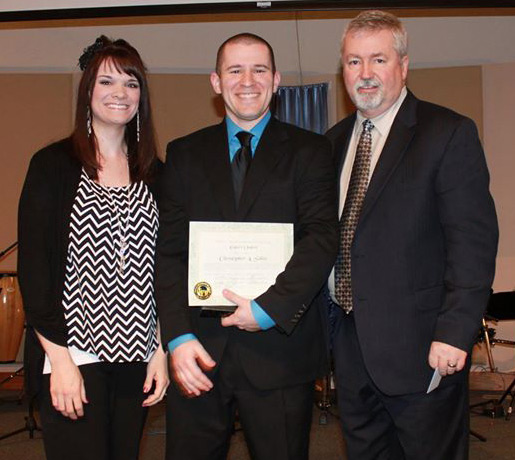 Chris Soltis was ordained on Sunday, March 15, at Shoreline UB church in Oak Harbor, Ohio. Chris is Pastor of Children & Youth Ministries at Shoreline. Chris holds a Master of Divinity from Winebrenner Theological Seminary in Findlay, Ohio. He and his wife, Sara Nichole, were married in 2006. Bishop Phil Whipple conducted the ordination at Shoreline. 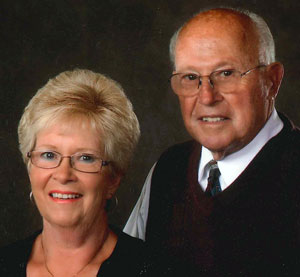 Last fall, Huntington University launched a major in agricultural studies. It promotes a Christian perspective on agriculture, recognizing a responsibility to be good stewards of God’s creation and to examine questions of sustainability and justice. The institute will admit its first students in the fall of 2015.

Now the program has a name: the Haupert Institute for Agricultural Studies.

The Institute was named in honor of Dale and Elaine Haupert, who have a long history with farming, Huntington University, and the United Brethren Church. The Hauperts attend Emmanuel Community Church in Fort Wayne, Ind.

Huntington University’s plan to start an agriculture program resonated with the Hauperts, whose involvement in farming has spanned 52 years. Their family farm in South Whitley began as a 40-acre operation and grew to 2,800 acres. Dale also grew up on a farm.

The Hauperts gave the lead gift that launched the Institute. Additionally, Dale serves as a charter member of the university’s Agriculture Task Force, and Elaine has hosted fundraising events for the institute in their home. Dale also has been a member of HU’s Board of Trustees for 26 years, so it’s a perfect blend of two long-time passions–farming, and Huntington University.

“The Hauperts are known as a farming family in this community, and they are highly respected in the agriculture community statewide,” said Dr. Sherilyn Emberton, president of Huntington University. “Dale’s persistence in making contacts and being the chief cheerleader for the agriculture initiative have been a key to the success of the program.”

Dale and Elaine decided to contribute their time and resources to Huntington University’s new program after having conversations with young people interested in pursuing careers in agriculture.

“Many of them are interested in agriculture but don’t want to go to a big university,” Elaine said. “They see the advantage of being at a smaller school, and it’s exciting to see how many are responding to being in an atmosphere like Huntington University. It’s so important that they’re in a Christian environment.”

The Hauperts were surprised when Dr. Emberton told them the institute would be named after them.

“We didn’t do this for recognition,” Elaine said. “The more the Lord gives you, the more He requires. We believe it’s not what you take with you that has significance. It’s what you leave behind.”

“It floored me,” Dale said. “I didn’t expect anything. I just wanted to do something to support the program.”

For Dale, the opportunity to become involved with the institute came at a serendipitous time. Just hours before he was approached about supporting HU’s agriculture program, he had read Jeremiah 29:11 after wondering if, at age 81, he could still make an impact. The verse says, “‘For I know the plans for you,’ declares the Lord, ‘plans to prosper you and not to harm you, plans to give you hope and a future.’” Like his wife, Dale was stunned that their step of faith resulted in an acknowledgement.

“We feel very humbled by this recognition,” Elaine said. “We’ve been involved with HU for the past 28 years because we believe in the mission. Agriculture has been an important part of our lives and is an important part of the economy. To offer this program in a Christian atmosphere is so exciting. This will give students more opportunities, especially those who have a passion for agriculture. God has blessed us more than we deserve, and anything we can do to help young people is a blessing. We have seen so many young people who have been impacted by HU and who go out and impact the world for Christ.”

Launched in the fall of 2014, HU’s Haupert Institute for Agricultural Studies promotes a Christian perspective on agriculture, which recognizes a responsibility to be good stewards of God’s creation and to examine questions of sustainability and justice. The institute will admit its first students in the fall of 2015.

To learn more, go to huntington.edu/agriculture. 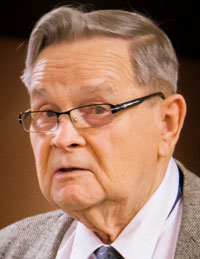 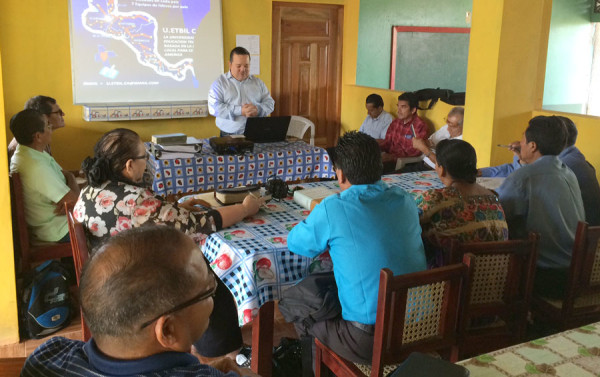 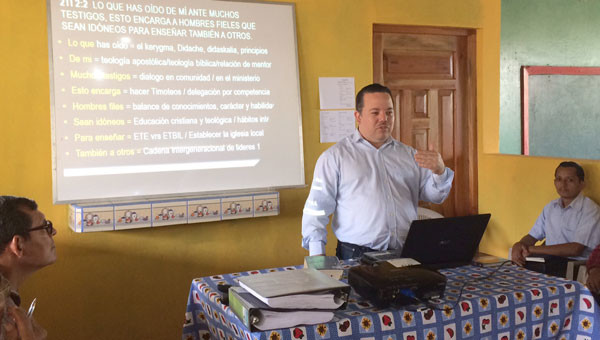 Twenty-five leaders from United Brethren churches are gathered together this week in Masaya, Nicaragua. They have come from Mexico, Guatemala, El Salvador, Nicaragua, and Costa Rica.

The focus of our time is to become acquainted with the ministry of ETBIL (Educación Teológica Basado en la Iglesia Local). For the past two years, Felix Zaldivar and Celso Midence, regional trainers for Central America, have been working to implement this ministry in Honduras.

The ministry is focused on developing and multiplying disciples and leaders within the local church. This “in-service” approach is based on 2 Timothy 2:2: “And the things you have heard me say in the presence of many witnesses entrust to reliable people who will also be qualified to teach others.” This methodology used by Jesus and the early church contributed to the rapid expansion of the church.

This is the first time we have gathered all of our Hispanic leaders for a retreat of this nature. Pray that God will help us embrace the challenge to make and multiply disciples and develop the leaders needed to expand the ministry of the church throughout the world—from “Latin America” to the ends of the earth.

10 Mar Jamaica: York Town Gets Its Roof Back 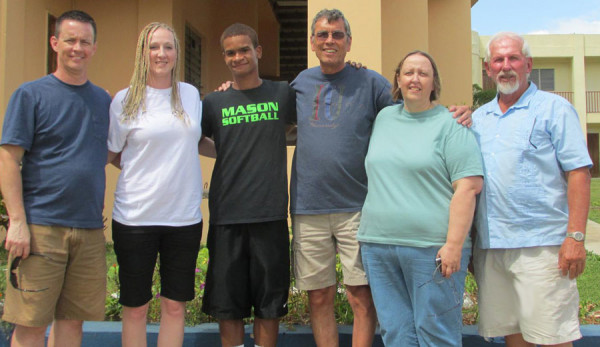 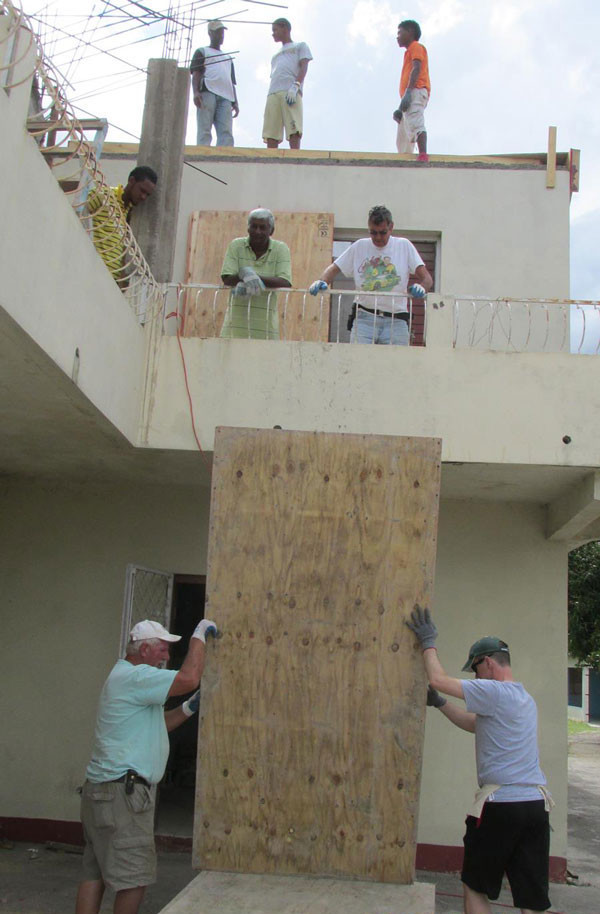 Working on the York Town roof.

After ten-and-a-half years, the roof at York Town UB church in Jamaica is getting replaced. In 2004, a hurricane took the roof off the education building, and it has been exposed to the weather ever since. The destruction went far beyond the roof, as the inside of the building also sustained a lot of damage. After some minor repairs to the structure, a good cleaning, a new paint job, and a lot of new fixtures, the inside will once again be usable.

The congregation at York Town has done a lot of hard work and fundraising to get back on their feet, but this has not been easy. In came help from the Sunfield United Brethren Church from Sunfield, Mich. Together, they saw the forms for the roof of the building go up last week. The new cement roof was poured Monday, March 9, once again shielding the building from the weather and thieves.

Help is still needed to restore the inside of the building, but it can now be done, and the building will slowly be put back into use.

The congregation praises God for his faithfulness and the help of the Sunfield church. A big thank you to Rev. Randy and Chrystal Carpenter , along with Jim Steward from the Sunfield Church; Martha Hanley from the Eden UB church (Mason, Mich.); Troy Howell from the Salem UB church in Jamaica; and Rev. Dwight Kuntz for investing their time and labor to see this project through this first stage. 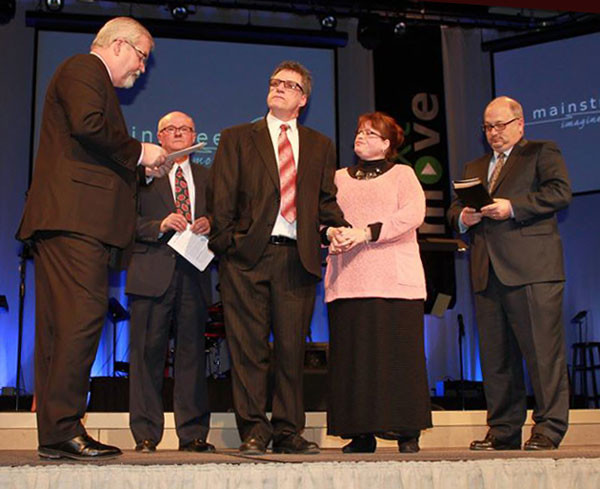 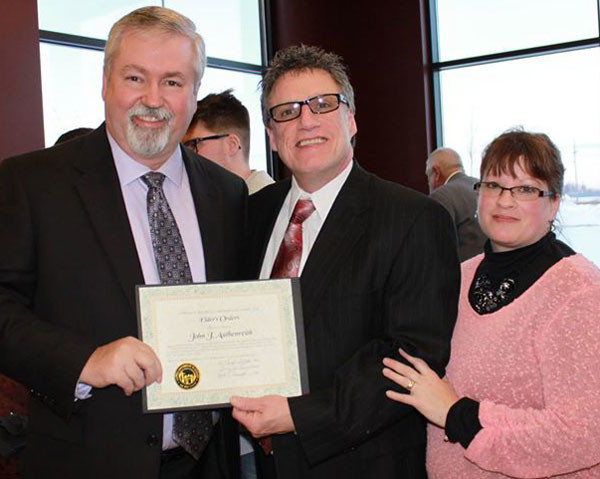 John has served on staff at Mainstreet since 2006. He and the Mainstreet worship team led the worship singing at the 2007 and 2009 US National Conferences.

“I praise the Lord for you and for your prayers on my behalf. On Monday, I had my cast and stitches removed and am now in a boot and allowed a small amount of weight bearing. Everything has healed well, and xrays show that the alignment of the ankle replacement is right on! There is quite a bit of pain.

“On Thursday, March 5, we will travel to Tucson, Ariz., where we will stay for a few weeks. The trip involves small planes and climbing steps, which might be a challenge.”