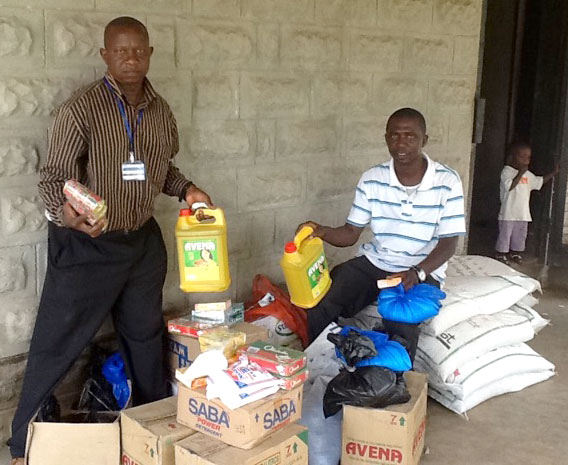 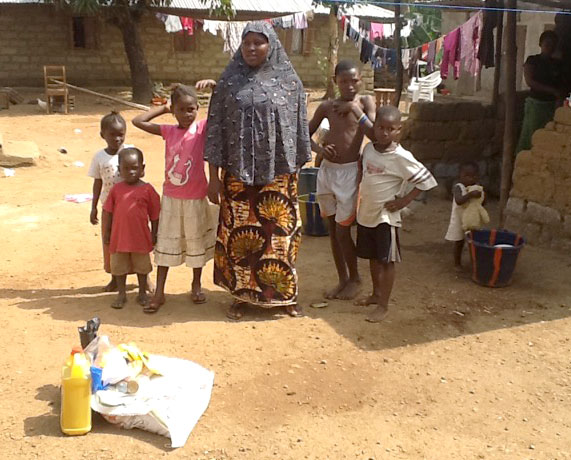 A Muslim mother and children receive relief supplies while under quarantine in the nearby village of Luawa Jong.

Last month we reported that a woman had died of Ebola at the Mattru Hospital in Sierra Leone. As a result, the hospital and most of its staff came under a 21-day quarantine, along with the residents of the woman’s nearby village, Luawa Jong. Bishop John Pessima provided this update along with words of appreciation for the funds Global Ministries provided for those under quarantine, and for our nine United Brethren churches in neighboring Liberia.

I thank you so much for your assistance and support for the Sierra Leone Conference during this crisis. We appreciate the funds that were sent for the quarantine homes and Liberia. We sent some funds to the Church in Monrovia for relief.

We went to Mattru with relief for quarantined homes. A distribution team was organized, including hospital staff and community members. A total of 15 homes were supplied. Each of these homes have family members ranging from 5 to 10 in number.

We thank God because this relief was timely, and it was appreciated by both the quarantined hospital workers and community. The media was invited to take part, so it was announced over the Mattru community radio broadcasts. On a phone-in program over the radio that same night, people expressed their appreciation to the donors–Global Ministries and the Sierra Leone Conference–for their timely relief.

The day after the distribution, a lady died in one of the quarantined homes in Luawa Jong. This home has been re-quarantined for another 21 days.

In addition, we received word that the 20-foot container of medical and relief supplies gathered by United Brethren and partner churches in the Mid-Atlantic arrived and has been cleared by customs. The items will be distributed by the Christian Health Association of Sierra Leone, of which we are members. The pallet of food supplies we sent should be arriving soon, along with the 40-foot container carrying $380,000 worth of Ebola medical supplies. The supplies were obtained by Brother’s Brother of Pittsburgh, Pa. Global Ministries paid for $14,000 in shipping fees, with funds provided by generous United Brethren contributors.