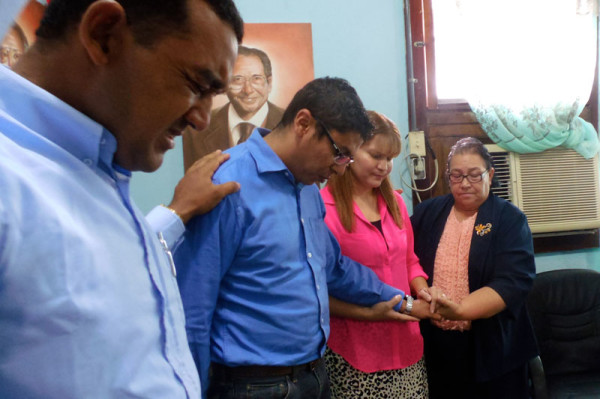 Commissioning the Pachecos–the first missionaries to be sent from Honduras Conference.

During the recent gathering of the Honduras Administrative Board, a new item of business appeared on the agenda. They were interviewing a couple for missionary service.

Since United Brethren ministry to Spanish-speakers began in 1951, Honduras National Conference has grown to more than 115 churches, an international school, a retreat center, and a theological institute. They sent one short-term volunteer to Haiti to participate with Canada in a construction project, but sending missionaries overseas has been an ambition yet to be fulfilled.

The “junta” (their governing body) interviewed and approved Milton and Erika Pacheco for ministry in partnership with Global Ministries. The location is yet to be confirmed, but Thailand is a serious consideration.

The Pachecos are active members of their local UB church. Milton has an undergraduate degree in business administration and a graduate degree from the conference seminary. He currently works for Habitat for Humanity, and he regularly ministers as a singer/songwriter in local churches. Erika is working this with Marilyn Reeck this summer with the Summer Institute of Linguistics. Both Milton and Erika plan to spend about a year at Huntington University studying missions before going overseas.