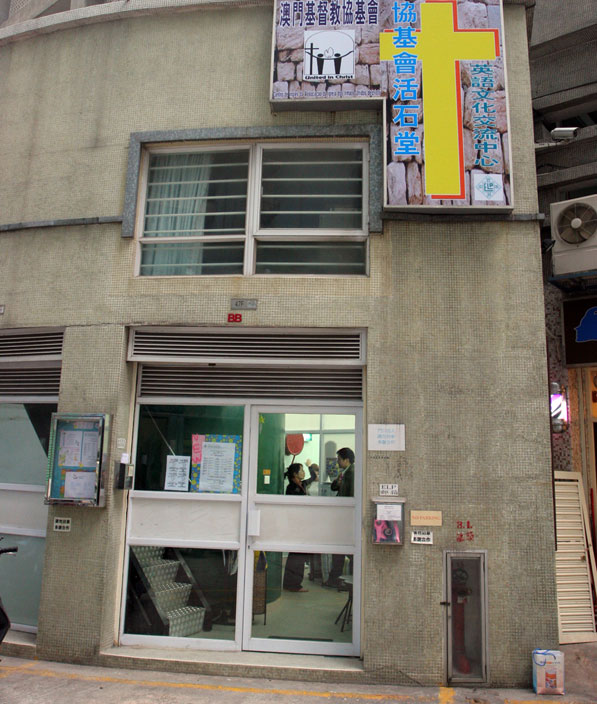 The Living Stone church in Macau.

There are two UB churches in Macau: Living Water and Living Stone. Living Water is a well-established church which goes back to the 1980s, when we began ministering in Macau. Living Stone, located on Taipa Island, traces back to 2001.

The ministry on Taipa began in 2001, when the missionary staff moved their offices to Taipa and launched a new English Language Program. The Living Stone church was founded in 2006. The Living Stone congregation consists of English and Chinese speakers, and they minister to a bilingual audience.

The Taipa ministry has used the same location since it began in 2001. Last year, the church was notified by its current landlord that the rent will be going up many times the current amount.

After exploring a few options, Living Stone decided to move. They have until June 2014 to find a new home.

A committee is evaluating a number of options. Given the size of Macau, it is not easy to find a place that is right in price, location, potential for ministry, and other factors. Please pray for the church – that the Lord will lead them to the right location, that the committee will be wise in discernment, and that this move will bring the church together amidst all the transitions and work.

In the coming years, Hong Kong Conference and Global Ministries will work in collaboration with the local churches and leaders to discern possible new ministry opportunities. The social, political, and economic landscape is changing in Macau, and we need to adapt with it. This process will require much more onsite research and meetings before setting a concrete vision. Pray for guidance, vision, and oneness of heart.

31 Jan Travels to California and Mexico

Bishop Phil Whipple and Global Ministries director Jeff Bleijerveld are on their way to California. They’ll be at the UB church in Pixley, Calif., this Sunday (that’s the only UB church in California). Then they’ll travel to Mexico to visit the UB churches there, accompanied by Denis Casco, Bishop of Mexico Conference.

31 Jan Seven Baptisms at the HUB 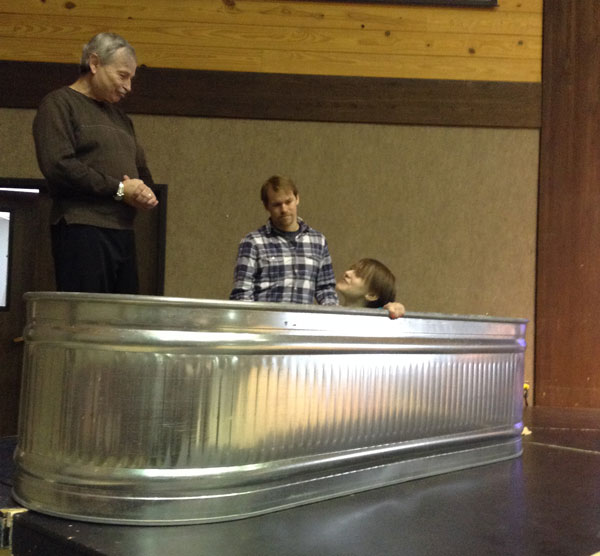 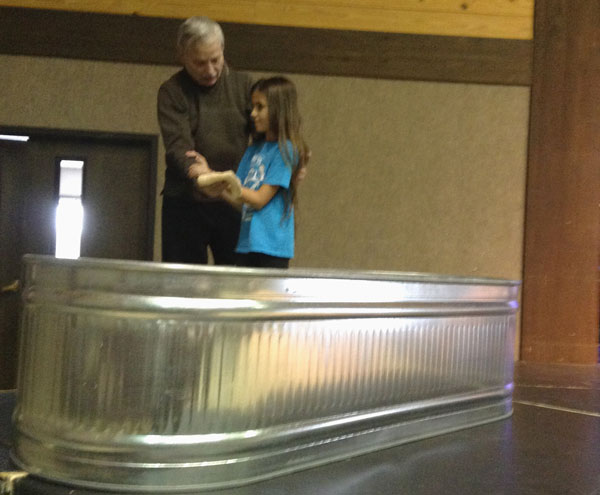 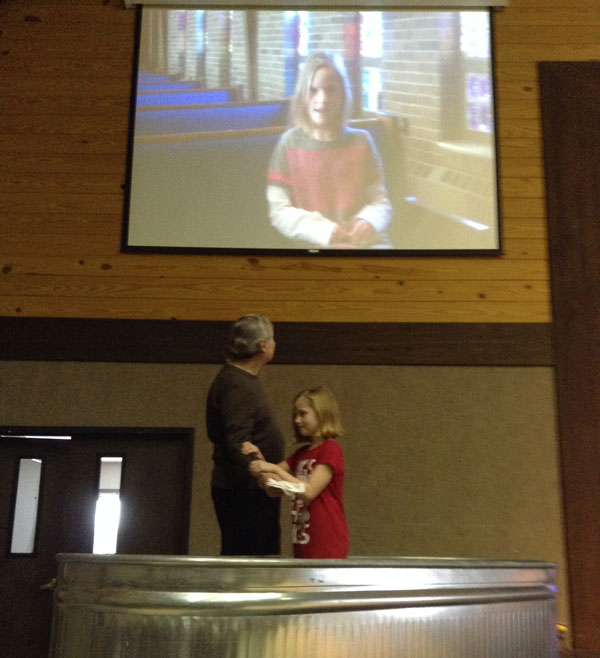 Despite having to cancel the first service due to severe weather and road conditions, over 300 attended our second service as we celebrated the 110th anniversary of Hillsdale United Brethren Church (Hillsdale, Mich.). Only seven of the nine baptismal candidates were able to get out of their driveways for the service. I delivered my annual State-of-the-Church address.

Other Days Coming Up

29 Jan The Story of a Big Brother 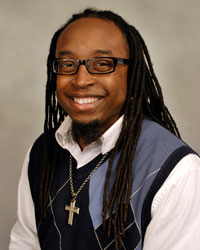 He has four kids of his own. He’s worked with youth through Fort Wayne Area Youth for Christ. His counsel is sought by students at Huntington University, where he now serves as campus pastor.

He ignored advice from his big brother on what girl to date, what car to buy.

“And you know what?” Wilson says. “He loved me anyway.”

The big brother in question wasn’t even a blood relative. He was an adult mentor paired with Wilson through Big Brothers Big Sisters of Northeast Indiana, a relationship that the now 34-year-old Wilson continues to cherish.

“Cliff treated me as if I was his own son,” Wilson says. “Cliff did fatherly things for me, and still does to this day.”

Wilson got involved in Big Brothers Big Sisters through Project Mentor, a BBBS program that focused on young African-American males in Fort Wayne. Wilson was a student at Memorial Park Middle School when his mom sighed him up.

“She understood the value of having a male role model around,” Wilson says. “I also believe my mother wanted better for me than what was our current state.”

Wilson says he was paired with a couple of other Big Brothers before making the connection with Cliff – a professional African-American man with multiple degrees and an influential position in the community. That pairing showed Wilson something more than the drugs and gangs that tempted him and his peers.

“Because of Big Brothers Big Sisters, I was spared,” Wilson said during an appreciation breakfast Jan. 16 for local big brothers and big sisters.

Later, sitting in his office at Huntington University, Wilson ticks off some of the things he learned from Cliff- how to be responsible, how to respect people, how to dress.

He remembers the time Cliff took him to a posh Fort Wayne restaurant.

“He said, ‘You know, Arthur, there’s a different world out there and it’s my goal to show it to you,'” Wilson says.

Most of the pair’s time together was spent in less exclusive locales – Cliff’s house for dinner or a basketball game on TV; visits to colleges, both public and historically black schools; helping Cliff mix tapes for the DJ business he ran in addition to his regular job; discussions with AIDS victims or victims of violence.

“We even took a prison visit,” Wilson says.

The two lived several miles apart when Wilson was growing up, so it wasn’t until Wilson turned 16 and bought a car – the car his big brother had advised him not to buy – that he started driving over and dropping in. Cliff established a rule.

“The car was a lemon,” says Wilson. “It had transmission problems and it leaked, so he said I couldn’t park it in the driveway.”

The car lasted “maybe a month” before giving up the ghost, Wilson says.

One area where Cliff didn’t try to sway Wilson was his choice of career.

“I was always set on ministry,” Wilson says. “Church was almost an escape for me.

“I decided a long time ago that was my course, and Cliff understood that – even though ministry is not the path to riches.”

Wilson says his home life, though, owes a lot to Cliff.

“I learned how to be a dad, watching Cliff’s love and his example he showed being a father,” Wilson says. “Cliff was a really good dad.”

With his responsibilities to Huntington University, his wife and his four children, Wilson says the time’s not yet right for him to step up as a big brother. But, eventually, it will be his turn.

“I am very much looking forward to the day I have the freedom to be involved in the program,” he says. “When I do make that commitment, like Cliff, it’s a commitment for life.”

The sixteen churches of Guatemala Conference held their annual conference January 15-17. During this time the conference elected Rev. Jaime Chun as their new superintendent. Rev. Chun and his family serve our largest congregation in Escuintla (located southwest of the capital of Guatemala City.

The out-going superintendent, Rev. Francisco Najera, was instrumental in bringing the churches of Guatemala into the United Brethren with the help of Rev. Juan Pavon of Nicaragua. He continues to serve his church on the outskirts of Guatemala City.

Rev. Chun came to Christ about the same time Francisco did, in his early 20s, as part of the movement happening among the churches being planted there. He and his wife have five children.

Global Ministries director Jeff Bleijerveld visited them when they were planting the church they now serve. The Chuns, all seven of them, were living in one room, which doubled as living room, bedroom…everything. The kitchen was outdoors under a tarp. They’ve now added a room for a small market, a personal business which helps support them. They area in which they live is mostly migrant workers who harvest sugar cane.

Guatemala became our 10th, and newest, national conference in 2010.

HCJB Global, the Christian radio ministry, has changed its name. The organization is now called “Reach Beyond.”

Doug Weber, a UB endorsed missionary whose family serves with HCJB, writes, “HCJB are really the call letters of our flagship radio stations in Ecuador, and they will continue to use these letters in their name. And for now, the technology center, where we will work in Indiana, will retain the name HCJB Global Technology Center. However the letters ‘HCJB’ don’t really convey the ministries that we do in healthcare, training, or leadership development. Nor do they convey the international scope that our ministries now enjoy.”

Doug says HCJB supporters don’t need to do anything different. They will simply see the new name on receipts, credit card statements, and EFT bank charges.

In the video above, Wayne Pedersen, president of Reach Beyond, explains the reasons for making the name change.

Pedersen says we need to reach beyond our borders, beyond our comfort zones, and beyond our perceived limitations.

Two other organizations that recently changed their name are:

On Tuesday, January 21, Michael Dean (right), a UB pastor in Virginia, was taken to his local hospital and diagnosed with a stroke. Presently, he is in the Critical Care Unit. His daughter, Briana, wrote on January 23, “He has lost his ability to fully communicate and has confusion. As you can imagine, this is pretty devastating.”

Please keep Mike and his wife, Jeanne, in your prayers.

Global Ministries has partnered with Huntington University to organize all of their short-term mission trips, and possibly do trip orientation and team leader training. Global Ministries can offer locations for valuable ministry experiences for HU students.

In Macau, Living Stone Church will soon be without a meeting place. The owner is significantly raising the rent.

We’re exploring ministry models that combine a business with a church venture. For instance, a facility could provide daycare during the week and be used for church services on weekends. This would provide income for the church, plus opportunities for interacting with young families.

This would open the door to different kinds of missionary staffing, moving away from the English teaching model to early childhood education and family ministry.