25 Apr Update on the Dave and Cathie Datema Family

Participants in the Ekballo Fast.

Dave and Cathie Datema serve with the US Center for World Mission in Pasadena, Calif. Dave is general director of Frontier Mission Fellowship, an umbrella organization for the US Center and other organizations.

Dave participated in a 40-day “Ekballo Fast,” March 1 – April 9, to launch the Antioch House of Prayer. “Ekballo” is the Greek word meaning “thrust out” that Jesus used when instructing his disciples to pray that the Lord of the harvest would “ekballo” laborers into the harvest field. 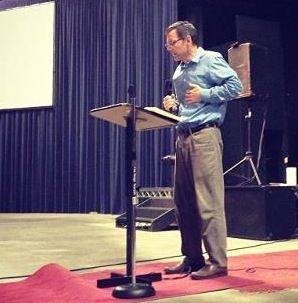 Dave Datema preaching on the final day of the fast.

Dave writes, “The fast was used to launch the house of prayer that will increasingly attract, nurture, and train young people to pray for unreached peoples and even go as missionaries. This is a collaborative effort and so far has been a big success. I loved the intense worship and prayer times and lost 20 pounds to boot! The Antioch House of Prayer is led by Lou Engle and another couple that facilitate things. They also have 5 dynamic young couples who will be the senior leaders and mentors to the many young people that will come for internships in the weeks and months ahead. We believe that many changes took place among unreached peoples as a result of our prayers during the fast, and we are trusting that God will use this house of prayer to continue to break strongholds for Kingdom advance. Coincidentally, April 9 is my birthday!”

Dave Datema preaching on the 40th day of the Ekballo Fast.

Financial support has become a concern for Dave and Cathie Datema, as it is with many other missionaries. They write: “We are in a financial pinch these days. When we arrived in Pasadena in 1999, we had only two children. Thirteen years later and without the usual furloughs that missionaries use to increase support, the added expense of a larger family with children involved in various activities, as well as increased rent and health insurance costs, has made its presence felt. If you are not presently on our support team as a donor and God has blessed you, we are in real need of additional funds (see info below). Dave is now giving serious attention to raising up new donors for our ministry here. Please pray for these efforts. Meanwhile, for those of you who are part of our team, THANK YOU for your generosity! 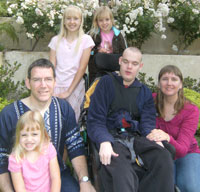 Some general updates about the family: