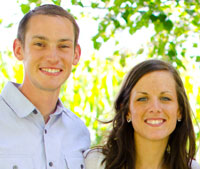 Bryan and Emily Gerlach have been approved as full support staff with Global Ministries. They will serve in northern Thailand sometime in the second half of 2013.

Bryan grew up in the Mt. Pleasant UB church in Chambersburg, Pa., and was a leader in the youth group. He graduated in 2010 from Houghton College (Houghton, NY) with a degree in Music Education. His short-term mission work includes trips to Mexico, eastern Europe, and the Ivory Coast.

Emily grew up in a military family, and lived a couple years at a time in Japan, the Azores, the Netherlands, and in six different states. She became a Christian during high school through a youth group. She attended three years of college at Spring Arbor (Spring Arbor, Mich.), and then transferred to Buffalo State College (Buffalo, NY), from which she graduated in 2011 with a degree in Art Education. She also participated in cross-cultural trips to Egypt and Belize.

Bryan and Emily were married in July 2010. In August 2011, they began a year as missionary teachers at All Nations Christian Academy in South Korea. While there, they attended a church that was very focused on human rights issues, including the plight of children and refugees who become exploited in human trafficking in Southeast Asia, especially northern Thailand.

They are currently living in Chambersburg, Pa. In preparation for service in Thailand, they are raising support and working in a Global Ministries internship in partnership with the King Street and Mount Pleasant UB churches in Chambersburg.