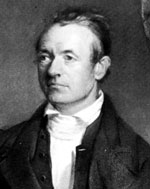 This week,Hillary Clinton became the first US Secretary of State to visit Burma–now called Myanmar–in 50 years. This gives occasion to recall another historical event regarding Burma.

On February 6, 2012, the 200th anniversary of the first North American missionaries sent by a mission agency from North America will be remembered in Salem, Mass. The program itself will take place at Park Street Church in Boston at 7:30 pm.

And who were those first missionaries? Adoniram Judson, Jr. and his first wife, Ann Hasseltine.

As an American Baptist missionary, Judson served in Burma for almost 40 years. At age 25, he became the first Protestant missionary sent from North America to preach in Burma (present day Myanmar). His mission and work led to the formation of the first Baptist association in America, inspired many Americans to become or support missionaries, translated the Bible into Burmese, and established a number of Baptist churches in Burma.

All three of his wives died either at sea of from tropical diseases, as did a number of his children. Judson himself died at sea in the Bay of Bengal on April 12, 1850, at 61 years of age.

You can read more about the Judsons on Wikipedia.