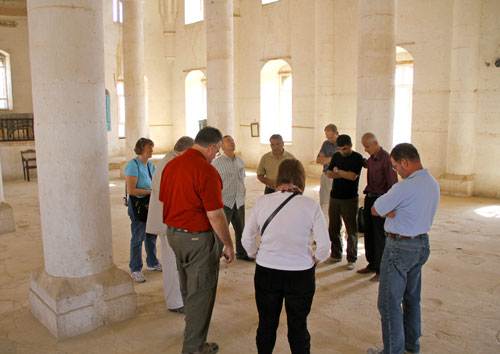 This church building in Eastern Turkey is being offering to the evangelical community for free, with the condition that they restore Christian worship in this city of some 200,000 people.

Turkey used to be the cradle of Christianity. You would never know it now. Pressure from Muslims, from both the state and grassroots levels, forced Christians to flee. Many went to Europe. Numerous churches became mosques.

However, during my trip to Turkey in early October, we visited two churches that have stood empty for around 250 years, and are under the control of the Syriac Orthodox Church foundation. The Orthodox church is looking for someone to come restore worship in these communities of 100,000-plus people. Maybe Turks are motivated a bit by wanting to join the European Union and show they are a pluralistic society. But the open doors are there.

One vacant church we visited could probably seat 300 people. It looks very much like an old European church, with high ceilings and columns. If you did some dusting, and brought in a generator to power lights and sound equipment, you could begin worshiping next week.

They told us, “If you’ll initiate worship in this building, it’s yours. We’ll hand the deed over to you.” An evangelical pastor traveling with us said, “I need to go home and talk with my wife about this opportunity.” We were told there was a large Protestant population that would immediately want to be part of any restart of that church.

In another community, we came across a church—not quite as ornate—with an American missionary couple working there. They have a number of believers who have relocated from other cities and churches to work alongside them, and have taken jobs in that community. The same deal: If we started worship in that building, we could have it.

At the same time, the Turks kept telling us, “This is still Turkey. Don’t write reports saying Turkey is turning to Christ.”

If you’re in a deep cavern and someone lights a match, that spark can seem real bright. But Turkey remains predominantly Muslim, with plenty of opposition to the Gospel.