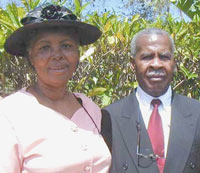 On October 10, Faith United Brethren Church in Christ Church in Jamaica held a service in honor and appreciation of Dr. Lloyd and Carol Spencer. Clergymen from within and outside the denomination, family, friends, and members of various local churches came from the entire island, and some from as far as Canada, to show their appreciation for the Spencers.

The service was filled with tributes, each one capturing some aspect of their over 50 years in ministry. They were presented with a citation and various gifts, after which they responded and Rev. Donald Dacres prayed for them.

After the service, a reception was held during which many individuals gave their open tributes.