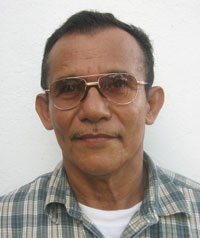 A work team will be headed to Haiti in early October to help close in the Delmas 33 Church that has been central to much of our rehabilitation efforts since the earthquake. The team will consist of twelve Canadians and one Honduran. Pastor Ruben Ponce (right) is being sent and fully supported by the Honduran National Conference. He serves a local church and also is a skilled carpenter.

Efforts to rebuild more churches this October have been hampered by a number of factors, and so our plans to deploy more teams have had to be put on hold. The Canadian team will work to resolve some of these issues while they are in Haiti. We hope to announce dates for a late spring, early summer project following their return.